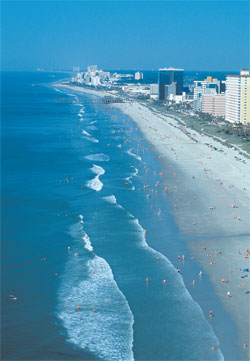 The Pavilion may be gone, but the jewel of the Strand is still Grand, especially if you play golf. Myrtle Beach has been referred to as “Golftown USA,” “Golf City USA” and the “Golfing Capital of the World.” And for good reason, with 103 golf courses to play, this area along Highway 17 is a slice (no pun intended) of heaven for golfers.

Mickey McCamish, president of Myrtle Beach Golf Holiday, points out while there are fewer golf courses in the area than previous years, due to the adjustments in the industry, the number of public courses still surpasses other popular golfing destinations.

“Golfers have many places to choose from for a true golf vacation,” he said. “However, I believe that Myrtle Beach offers quality, as well as variety, that cannot be matched anywhere in the world. We have courses designed by all of the top pros in the industry. There is truly a course for everyone.” When asked about which ones he would recommend, he commented that they (courses) are “all great. It would be hard to narrow it down because each of them has their own uniqueness and special characteristics.”

Since 1969, the PGA Tour has been coming to Hilton Head Island to test the world’s best players at the Harbour Town Golf Links, a Pete Dye masterpiece that the golfing community has claimed as the birthplace of the modern golf course. It’s a perfect fit to the state that was the first to recognize the game of golf, dating back to 1786 with the South Carolina Golf Club in Charleston, and the traditions of the game of golf are alive and well at Harbour Town.

The golf course was the central focus of the Sea Pines development and was the vision of Charles Fraser, the mastermind behind Sea Pines and the development of Hilton Head Island. He wanted the world to know that South Carolina was the first state to recognize the game of golf, and Fraser wanted a course that would complement this piece of history. He relied on the wisdom of Jack Nicklaus as a design consultant, and hired at the time the relatively unknown Pete Dye as the main architect. The idea was to produce a golf course that was reminiscent of the old courses of Scotland, complete with small, undulating greens and unforgiving greenside bunkers known as pot bunkers. The final product was a course that embraced the old traditions of golf course design with a progressive, modern edge that stood apart from the courses in the United States at the time.