Some of the world’s best wheelchair tennis players will return to Hilton Head Island from Sept. 21-24 for the Professional Tennis Registry’s $20,000 Wheelchair Tennis Championships.

Resuming the Tennis Update now that tennis is starting up again. We hope everyone is well and looking forward to a less eventful future.

Grace Berrigan, daughter of Paige and Tom Berrigan of Hilton Head Island, was named Class A Tennis Player of the Year by the South Carolina Association for Women’s Sports. Grace grew up playing competitive tennis and soccer on Hilton Head. Before attending the South Carolina Governor’s School for Science & Mathematics, she played on Hilton Head Island Christian Academy’s varsity team beginning in the seventh grade. She finished her 2015 and 2016 seasons undefeated and was named the No. 1 player in the Pee Dee region this year.

Wexford head tennis professional Mike Pollard was recently named Professional Tennis Registry Member of the Year for South Carolina. This award is presented to a PTR member who has shown dedication and diligence in promoting and supporting tennis and PTR. Pollard coaches more than 25 adult USTA teams annually, as well as both men’s and women’s interclub teams. He also coaches multiple adult players who compete in both the singles and doubles Ultimate Tennis Leagues, as well as multiple Junior Tennis teams during the year. 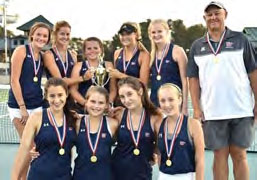 Hilton Head Preparatory School recently won the SCISA Class 2-A tennis title, making it the fith consecutive time the program has won the state title. The Dolphins defeated Trinity-Byrnes in the championship match 5-2 in Sumter.

Tennis coaches, players and volunteers from all over the state will be honored for their tennis achievements later this year by USTA South Carolina. In all, 24 people and organizations will receive USTA South Carolina awards at the organization’s annual meeting on Isle of Palms in December. Locally, Hilton Head Island’s Ann Hunt is the Adult Female Player of the Year and the Wexford Tennis Club is the Member Faculty of the Year.

Public Tennis Inc. recently announced the creation of a program to award grants to junior tennis players. The grants will hlep competitive juniors who are aspiring to achieve national and/or international rankings by assisting with their travel, training and/or the equipment expenses associated with junior tournament events.

How does a relatively small community like Haig Point consistently produce a string of wins? For the seventh year in a row, Haig Point has sent at least one team to the South Carolina State Championship. The men’s 55-and-over teams have represented Hilton Head at the state tournament for each of the last three years. This year, the women’s 3.5 55-and-over team, finished in the top four.