Billie Jean King made a sentimental journey to Hilton Head Island recently for recognition from PTR, the Professional Tennis Registry.

The international organization of tennis coaches and pros founded by Hilton Head's Dennis Van der Meer honored her with induction into its Hall of Fame at its banquet Feb. 17 at the Sonesta Resort.

The event drew topfl ight players to Shipyard, a place King had a hand in developing for world class tennis.

She began playing at the age of 11 and found tennis so fulfilling that she wondered why more people weren't participating.

While daydreaming of more opportunities for playing the sport she found so exciting, she asked herself, "Where is everybody else?" 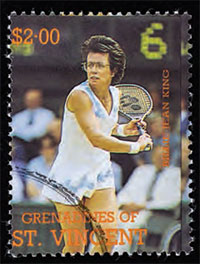 She recognized that participation in sports was harder for girls.

"I couldn't articulate it but I knew it," she said.

"Tennis should belong to everyone," she thought, and it drove her to pursue equal rights and opportunities for all.

Among King's tennis heroes was Lowcountry native Althea Gibson, the first black athlete to break the color barrier in tennis, winning the U.S. Open and Wimbledon in 1957 and 1958. King is grateful she had the opportunity to see Gibson play when she was 13 because "If you can see it, you can be it," she said.

"My life wasn't about records," she said, and her achievements weren't about chasing points but developing women's tennis, and founding the WTA, the Women's Tennis Association. BEQUIA - CIRCA 1988: A stamp printed in Grenadines of St. Vincent shows tennis player Billie Jean King.

King's famous Battle of the Sexes match with Bobby Riggs had a Hilton Head connection too in that Dennis Van Meer served as King's coach in the epic contest.

"There was a lot riding on it for social change," King said. "That match changed everything."

Although King chose Van der Meer as her coach, it was his friendship and respect that lent moral support to her performance on the court.

King remembers the beauty of the island in the 1970s when she served as touring pro at Shipyard. King lent her expertise to Van der Meer in the development of Sailmaster including participating in the groundbreaking.

King's story is due to gain renewed interest with a film depiction of the Battle of the Sexes starring Emma Stone as King and Steve Carrell as Bobby Riggs.

She's excited about the upcoming film because she's become close friends with the screenwriter Simon Beaufoy, know for "The Full Monty," "Salmon Fishing in the Yemen," and "Slumdog Millionaire." The film begins production in April.