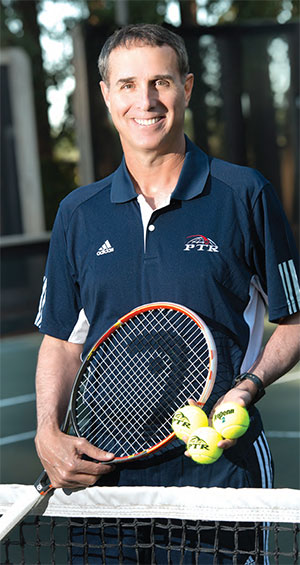 At a recent speaking engagement in Canada, Dan Santorum passed along a bit of advice that might come as a surprise given his lengthy list of accolades.

“Never apply for an award,” Santorum told the crowd, “because you’ll never be disappointed, and if you do get an award it will be a pleasant surprise.”

Santorum’s career has been filled with pleasant surprises, and the longtime Hilton Head Island resident received another one when he learned he will be inducted into the United States Tennis Association Middle States Hall of Fame on Oct. 30.

The accolades — including the Educational Merit Award from the International Tennis Hall of Fame, induction into the South Carolina Tennis Hall of Fame, and the International Tennis Federation’s Service to the Game Award — are the byproduct of a labor of love. When Santorum graduated from the University of Florida, he “was just going to go where life led me.” Three decades later, he’s still on Hilton Head, serving as chief executive officer of the Professional Tennis Registry, a nonprofit organization that educates, certifies and serves tennis teachers and coaches worldwide.

“I don’t do what I do for awards, I do it because I love what I do,” Santorum said. “I’ve been fortunate enough to have a great staff and a very supportive board. The average tenure of a job is seven years, and then you move onto something else. I’m definitely on borrowed time as far as that goes.”

He certainly has earned his stay. PTR has more than quadrupled in size during his tenure and boasts about 15,000 members in 125 countries. Santorum isn’t just running things behind the scenes, either. He personally has conducted nearly 400 certification workshops on six continents, in 45 countries and in 198 cities, according to PTR’s website.

Santorum’s work with PTR has come full circle recently with the relaunch of the Advancing the Commitment to Education (ACE) program, which Santorum helped create in the early 1990s and counts among the projects of which he is most proud.

The ACE program, which is aimed at increasing the number of tennis coaches of color in the United States, featured Arthur Ashe as its spokesperson when it started in 1991 and was relaunched following Ashe’s posthumous induction into PTR’s Hall of Fame last February. PTR has begun a schedule of ACE workshops in 33 cities across the country in hopes of boosting diversity with a goal of having coaches of color representing 33 percent of its membership within three years.

“What better way to honor Arthur than by restarting a program for which he played a pivotal role?” Santorum said.

The organization has a similar goal to honor Billy Jean King, who will be this year’s inductee into the PTR Hall of Fame. Santorum has informally dubbed 2016 the “Year of the Woman” for PTR, with the group taking on initiatives to reach the same 33 percent threshold for female membership.

Such initiatives are especially important, Santorum said, because of the advancing age of a generation of tennis coaches and fans. It’s critical for the sport to attract diversity within the younger generation, which is in keeping with the USTA’s national initiative to attract more Hispanic players.

Santorum’s work has often taken him back home to western Pennsylvania — he has done more workshops in the Middle States section than any section other than his home Southern section — but his next trip will be a bit different. His family will be in tow to attend the hall of fame induction ceremony, and he looks forward to showing his 14-year-old son the area where he was raised and hopes to catch a Steelers game while in town.

“The old country song says you can’t go back home, but I’m looking forward to it,” Santorum said. “That’s where I grew up and that’s where I started playing tennis. I have a lot of good friends up there, and it’s quite an honor to be recognized by a section that I haven’t lived in for almost 40 years.”