“Three all,” booms the man’s voice, still as loud and clear as it was years ago when he presided over the biggest tennis matches of the day.

Norm Chryst is not chairing this contest, however; he is serving in the match tiebreaker.

Wearing his hat backwards, a black polo and Rogers Cup shorts, Chryst tosses the ball, rocks back and leaps forward to strike a flat first serve. 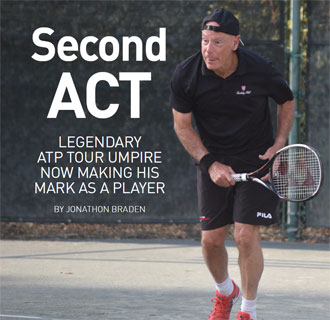 Chryst, 68, is playing this 40 and Over 4.5 USTA League match on green clay, a tricky surface for serve-and-volley players. But for the next few seconds, he makes the surface seem ideal for the tactic.

He rushes forward and, standing just behind the service line, taps a backhand half volley cross-court. It lands inside a service box and out of reach of his opponent, who is Chryst’s junior by 24 years.

“Who’s this guy?” he asks a nearby friend.

“Norm Chryst,” his friend says. “You know him?”

The other man shakes his head.

“He was an ATP umpire. He did, like, Wimbledon, the U.S. Open … He was on TV all the time,” the friend says. “When he questions your call, you think, oh, I guess it was out.”

After the match, when Todd Stone learns that his opponent is 68 and still playing 4.5 tennis, he offers a hopeful but also realistic statement: “I want to say I look forward to the day I’m doing what you’re doing,” Stone says, then pauses. “I hope.”

Few people are doing what Chryst is doing.

He is ranked No. 17 in the country in the men’s 65 and over singles rankings. In doubles for the same age group, only three teams are ranked higher than Chryst and his partner.

Last year, Chryst also beat out the thousands of adults who play tennis in South Carolina to be named the 2014 USTA South Carolina Adult Male Player of the Year.

When it comes to his success, Chryst says, “Well, I’m retired, and I basically play a lot of tennis.”

At least four times a week, he plays on the green clay courts in Bluffton’s Berkeley Hall community, where he and his wife, Palma — together the No. 1 mixed doubles team in the state and in the southeast — moved seven years ago to be closer to family.

The couple had been living in Scottsdale, Arizona, after living in California, where Chryst experienced his first Association of Tennis Professionals tournament as a chair umpire.

It was 1978, and by day he was working as a programmer at Bank of America in San Francisco. But on weeknights and weekends, Chryst, a former walk-on turned No. 6 singles player at the University of California, Santa Barbara, played tennis. And he sometimes played with a friend who umped tennis matches in his free time.

That year, Chryst’s friend asked him if he wanted to help umpire the San Francisco ATP tournament in October. Chryst did and everything went well. And for the next 10 years, he used vacation time and free weekends to umpire ATP and Women’s Tennis Association professional events in the region, including tournaments at Indian Wells and Los Angeles. Chryst even worked a couple US Opens.

But by 1991, he was ready to quit. Bank of America had transferred him to Arizona, and Chryst wanted to simplify his life.

So when Tom Barnes, a friend and then US Open referee, called and asked Chryst to work in New York that fall, he said no. But Barnes prodded him and called in every favor Chryst owed him, and later that year, Chryst was in Flushing Meadows, New York, chairing two matches a day for the tournament’s first week.

His return flight was booked for that Sunday, though, and he had told his Bank of America boss he’d be back at work Monday.

But two days before Chryst was scheduled to leave New York, Barnes asked for another favor and told him he needed him to stay a little longer. Again, Chryst said no, but eventually relented and worked through the weekend. And on Tuesday, when the remaining tournament umpire schedule was posted, Chryst learned he was staying through the final matches.

He had done such a good job the first week that Barnes scheduled him to chair the 1991 US Open Men’s Final.

In two weeks, Chryst had gone from umpiring professional matches around Northern California to overseeing one of the biggest matches of the year, a Grand Slam final between Stefan Edberg and Jim Courier.

For Chryst, one moment in particular stands out during his first final match as chair umpire. It was in the first set, and Courier disagreed with a linesman’s call and wanted Chryst to intervene.

“What are you doing out there?” Chryst remembers Courier saying. “That ball was out. Why didn’t you overrule it?”

“From here, I couldn’t tell if the ball was in or out,” Chryst remembers telling him. “I have to go with my linesman.”

Courier continued to question, and Chryst told him, “I know that linesman. He’s very good. I trust him.”

Then Courier eyed the men’s officiating supervisor courtside and shouted about Chryst. “Who is this guy? I’ve never seen him before in my life. Who is this guy?”

Chryst and the pro players didn’t know it at the time, but they would be seeing a lot more of each other during the next 20 years, including at six more US Open finals.

Two months later, Chryst was laid off from his programming job. About five months after that, in March 1992, he was in Mexico chairing challenger matches. And in July, the ATP Tour decided to hire him to as its fifth full-time umpire.

For the next 20 years, Chryst worked about 25 weeks a year, which turns into 40 weeks when including travel time. He didn’t get rich from officiating tennis matches — he made between $800 and $1,000 a week plus expenses — but he loved the perks.

“I like going to work in shorts and a polo shirt and sitting around in the sun all day,” Chryst says. His job took him to 34 countries and 88 cities, where he umpired 4,368 matches, including 190 finals. He also worked eight Australian Opens, 15 US Opens and six Wimbledons.

But he never worked a French Open. “The ATP never assigned me and it was never somewhere I wanted to go,” Chryst says. French wasn’t his strongest language, he said.

He preferred Australia. “The people are very nice. I like the weather,” he says. “You’d leave winter here and go to summer in Australia.”

Chryst’s worldly travels and busy schedule might help explain how he’s still playing so well at USTA League matches in Bluffton and at tournaments across the country.

As a chair umpire, he watched a lot of tennis but played only about an hour a month. Umpires worked all day and had only a small window of time to play before players needed the courts at 8 a.m. “I took 20 years off, so my body seems to be doing OK,” Chryst says.

His playing schedule has changed, but on court, he’s kept the same mantra he had as an umpire: be consistent.

“(Players) always knew what they were going to get. I was consistent,” he says. “I would enforce the rules and I expected everybody to play by those rules.”