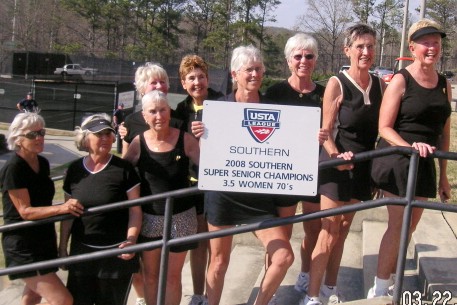 Hilton Head Island pros last summer shared with us what they do to stay hydrated, especially during warmer months. (We never have hot months.)

Forget all those special-name diets. Here’s what these champions eat and drink. Interestingly, not one mentioned “Wheaties – Breakfast of Champions.”

Begin with team captain Catherine Haight, who said, “I don’t eat breakfast if I’m playing by 10 a.m. We started in Pelham, (Ala.) at 11 a.m. two days, so I had an omelet with bacon. I’ve never had a cup of coffee in my life, so I don’t drink anything. Doesn’t sound like good advice for anyone else, does it?”

Millie Bloom, who won three matches with partner Marian Trenis at Southerns, said, “Every day for me is just a bowl of Total cereal sprinkled with raisins, a glass of tomato juice along with my vitamins; and on tournament days it is exactly the same! (If eating Honeycomb cereal would help my serve, I’d devour the whole box!!!)”

Partners Martha Borcherding and Gretchen Wager won two crucial matches at Southerns. “I usually have orange juice, coffee and toast or an English muffin,” said Martha, adding, “If playing a match, I add cereal such as Frosted Mini Wheats or Grape Nuts. I drink diluted Gatorade during the match.”

Ruth Huebsch, teamed with Borcherding for a win, offered that she eats virtually the same breakfast every day: “1/2 grapefruit and a bowl of Total cereal with blueberries, 1/2 banana and milk. If the match is very early, I just get up earlier than usual, so I won’t be playing on a full stomach.”

Janet Palmer, who teamed with Anna Elion, said, “I normally alternate, having cereal with fruit one day, and then egg and toast the following day. I always drink hot tea, orange juice, and have a banana every day.”

Anna gives her champion regimen: “In general, I am careful to eat some protein with each meal. This stabilizes blood sugar levels and helps maintain energy levels. In very hot weather I take Endurolyte tablets to replenish electrolytes, bananas for potassium.”

Killer Bee Mary Ellen Arboe, who missed the Southern trip, added, “I always have juice, coffee cake and coffee. That’s not what you’d exactly call healthy, but why change my bad habits?”

TAKE A TIP FROM … Jolene Watanabe, Smith-Stearns Academy instructor and Luck of the Irish Tournament champion (Her Mom won, too) offers a pro’s routine. “I learned early that preparation was the key to success, so I became very disciplined about my routine on match days.  Breakfast was generally cereal or oatmeal. I would plan my meals around match times. I liked to eat about two hours before a match and would lunch accordingly — generally a small sandwich so I wouldn’t feel heavy on court. If there was a short break between matches, I always snacked so that I would not run out of energy. If there was more time, I would have a sandwich.”