The name Van Der Meer in the tennis world is as familiar as Billie Jean King’s. But the life story of Dennis and Pat Van Der Meer is much more than one of global recognition and respect; it’s really a love story on many levels. 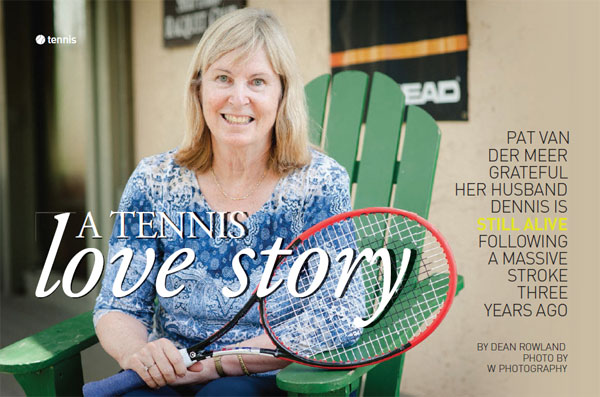 Tennis brought them together for the first time in 1980 on Hilton Head Island, and they have been together ever since. They have been husband and wife, best friends, business partners, world travelers, coaches, authors and innovators.

“I love him more today than I did 33 years ago,” said Pat Van Der Meer, who handles the business operations and closely works with the young students at Van Der Meer Tennis at the Players Club and Shipyard Plantation. “I appreciate everything I have more.”

Now more than ever, because three years ago her husband suffered a massive stroke at the age of 78. She was by his side during his rehabilitation, and he has lived at their oceanfront South Forest Beach home since being discharged. 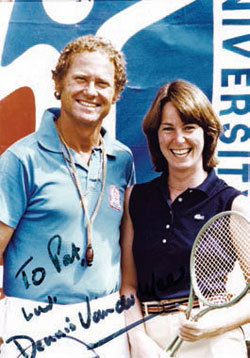 “We talked about everything all the time,” she said, reflecting on what was. “We worked together all day long, traveled together … we were almost one person.”

Now, the words from his mouth are few and strained, but physical gestures allow him to communicate with her. “I know what he’s thinking pretty much,” she said. “The oddest thing about the stroke is he was such a talker. He would talk your head off. I’ve become more of a talker because I have to.

“He can do a lot of things,” said the Philadelphia-area native. “I’m just grateful, because I didn’t think he was even going to live.”

What a life Dennis Van der Meet has lived. Born the son of missionaries in a Southwest African village in Namibia, he was introduced to tennis at the age of 6 when his mother strung a rope over some sticks, handed him a ratchety racket and told him to hit the ball. A love affair began. The family moved to Capetown, and he pursued competitive tennis until he was about 19. With his love of the sport blossoming, but without the skills to advance further as a player, he turned to coaching. Another love affair began.

Van Der Meer emigrated to the United States in 1961 and quickly ascended the tennis ladder of success as an innovative coach in California, where he began envisioning a standardized approach to group teaching. He mentored an A-list roster of junior national and world champions, including Margaret Court and Billy Jean King.

In 1973, a media spectacle, called the “The Battle of the Sexes,” launched tennis into the stratosphere of the national sports consciousness and culture. Van Der Meer coached both Court and King in matches against the older Bobby Riggs. King and Van Der Meer maintained a close professional, personal and business relationship for years.

His 25-year evolving vision to standardize group teaching methods to all students of the game and to teaching certification came to fruition in 1976, when he founded the Professional Tennis Registry (PTR). Today, about 15,000 PTR professionals in 120 countries are “keeping it simple and keeping it fun” for students because they utilize Van Der Meer’s concept of a universal language and progression for teaching tennis, his wife said.

He decided to relocate his expanding enterprise to Hilton Head Island in the 1970s, purchasing “swampland” near Cordillo Parkway at what is now the Players Club Resort, Pat Van Der Meer said. He opened the Van Der Meer Tennis University in 1979, which left a huge imprint on the growth of island tennis to this day.

In the meantime, Pat Van Der Meer graduated from American University in Washington D.C. with a major in education, taught for a few years and played in some tour tournaments. Her coach said, “You really should take Dennis’ class and try to get certified.”

So she was off to South Carolina in 1980 to attend the teaching academy, and both of their lives changed forever.

“I was so excited to meet him because I had heard so much about him,” she recalled. “I thought, ‘This is a nice looking man,’ and that’s all I can remember. I guess he thought I was nice looking, too.”

One day later he asked her out for dinner, and she and her future husband - and a friend of hers (she wouldn’t dare go alone) - ate at the now defunct Ruby Tuesday.

She was smitten … and so was he.

“He made a joke when I was leaving to go home (after the coaches’ clinic), ‘I think you’re just going to have to marry me.’ … I laughed, he laughed and we knew it was serious.”

With their love of each other and their love of tennis, they began building their business and cultivating close friendships around the world.

Now, a staff of about 50 during the peak summer season teach hundreds of children, teens, adults and coaches at the Dennis Van Der Meer Tennis academy, center and clinic at the two sites.

It’s easy to trace Dennis Van Der Meer’s legendary reputation in the tennis world back to his sharing the love of the game with students of all levels, his revolutionary books, numerous professional accolades and his hands-on exuberant personality.

“If you signed up to take a clinic with Dennis Van Der Meer, you went home knowing Dennis van Der Meer,” said Steve Rickard, director of tennis operations. “He would treat everybody individually. He made sure he knew your name. If he had seven people in a weekend clinic that started at 2 o’clock Friday, he knew everybody’s name by 2:30 Friday.”

Kim Lutian, director of marketing and retail, admires him and his work ethic. “He wouldn’t go home until he returned all his phone calls,” she said.

And so it goes at the Van Der Meer Tennis compound. Even though Dennis Van Der Meer is homebound now and Pat Van Der Meer can be found on the grounds chatting with everyone who walks by, they still are playing doubles in tennis and in life on their own special center court.