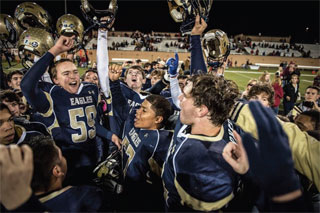 Gone is quarterback Michael Julian, who will take his snaps at NCAA Division I Toledo this fall, and the Seahawks' pass-happy offensive attack went with him — at least for now.

"We build our offense around a P-F-P philosophy — players, formations, plays," Payne said. "You have to do what your personnel dictates. We have a Division I tailback, and we have a big bulldozer in front of him, and we have a strong offensive line. … We're not going to throw the ball 60 times a game, but we're not going to be three-yards-and-acloud-of-dust, either. We'll still run the offense with some pace."

That tailback is senior Khalil Lewis, who rushed for a school-record 1,703 yards a year ago and will again have two-way standout Poona Ford paving the way for him at fullback. The offensive line returns three starters, and Payne thinks that unit could be one of the Seahawks' most pleasant surprises.

The biggest question on offense is who will step in for Julian. Sophomore Aidan Hegarty emerged as the backup last year and presents a dual threat, but senior Ben Olliff is healthy after being limited to playing defense following a injury to his throwing hand last year.

"We're in a good situation with those two guys," Payne said. "Both guys bring different things to the table."

Payne thinks the development of a young secondary will be the biggest key to success on defense, but he also believes star players like Ford, a major Division I prospect, must live up to their expectations in order for the Seahawks to contend for a region title.

"The guys who are our big guys need to play like prime-time players," Payne said, also lumping in Lewis and senior linebacker Chase Rinehart with that group. "We can't afford for them to take a step back. They have to be the guys we expect them to be." 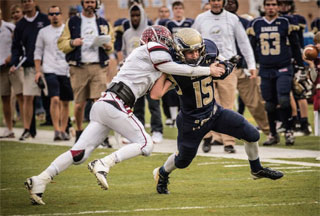 Leading into each of his first three seasons at Bluffton High School, Ken Cribb's lofty expectations have been met with a degree of cynicism. When he talked about winning eight or nine games with a team that had never made the playoffs, folks laughed.

The Bobcats won 12 and finished as Class 3-A Lower State runner-up.

When doubters called that a fluke, all Cribb's team did for an encore was go 14-1 and reach the Class 3-A state final. And when the move to Class 4-A was supposed to return Bluffton to reality last year, the Bobcats instead returned to the state semifinals.

So forgive Cribb if he can't help but laugh at the notion of a rebuilding year in Bluffton.

"We've graduated the house and everybody's thinking it will be a rebuilding year," Cribb said. "I'm actually excited thinking we can play at least as well as we have.  I'm not sure we can't be better."

Gone are a number of key players — including star quarterback C.J. Frazier, leading rusher Tykeem Major, top receivers Marquis Webber and Demetrius Smalls and starting offensive linemen Yerko Castedo and Austin Chittum — but Cribb has proven during his tenure at Bluffton that he can plug just about any talented athlete into his offensive system and have success.

Junior quarterback Alex Davis isn't yet the polished passer that Frazier was, but he is a much greater threat to run. Along with seniors Gerald Roberson and Jawara Middleton at the wings and B.J. Hill at superback, Cribb thinks the offense can be more balanced, if not as explosive, as last year's.

As much as it pains an offensive mastermind like Cribb to say it, though, these Bobcats will be built around their defense. Sure, leading tackler Rogan Ferguson graduated along with defensive backs Anthony Smith, Jeremy Scott and John Treretola, but the Bobcats figure to have one of the top defensive lines in the state, if not beyond.

Led by highly-touted junior Shameik Blackshear, who has committed to South Carolina, and senior K.J. Ford, who is being courted by N.C. State, among others, Bluffton will have two of the state's top prospects as bookends. And Cribb thinks one of the players between them, defensive tackle Mike Jones, will turn scouts' heads, as well.

"Defensively, we'll be the best we've been," Cribb said. "We have more size, strength and speed than we've ever had on that side of the ball." 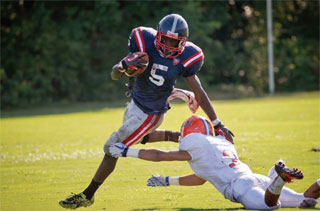 Longtime coach Tommy Lewis left Hilton Head Christian Academy in January and took his son — and starting quarterback — Caleb with him. But he left behind a winning tradition that new coach Ryan Mitch and the team he has inherited don't intend to let go of without a fight.

"The first time we met, the tone of the meeting was they didn't want to be the senior class to stop the trend of state championships,"Mitch said. "And I told them I don't want to be the person who stops the streak, either, coming in as a new coach."

It's with that lofty goal that Mitch begins his tenure with the Eagles, who are the two-time defending champions in SCISA Class 2-A and won four titles and reached the championship game two more times during the last seven years of Lewis' 10-year tenure.

In addition to the Lewis duo, the Eagles also lost leading rusher Tyler Chisholm, twoway standouts Clay Oliver and Reed Shindell, and game-changing defensive backs J.D. Reichel and Jamario Williams to graduation. It didn't take long for Mitch to see that they returned their emotional leader, though, in senior Brad Meccariello.

"The team kind of goes how he goes," Mitch said.

Meccariello will take over at quarterback, running Mitch's spread offense that features a heavy dose of short passes and read-option run plays, a perfect fit for his skill set.

"He's getting better with the passing stuff, but he's a tough kid and he's a great athlete," Mitch said of his new quarterback. "I think it really gives us an advantage there with him being able to run the ball. He's so dangerous with the ball in his hands."

He will have an explosive backfield mate in senior transfer Devontae Doe, who rushed for 1,379 yards and 13 touchdowns for Ridgeland- Hardeeville High School last season, and the duo will have an opportunity to run behind an experienced offensive line.

The defensive unit also will be affected by coaching turnover, with longtime coordinator Vinnie Emery stepping down, but experienced assistant Smitty Cooler has taken over those responsibilities and will keep the Eagles' base defense in place.

"That's the goal," he said. "I like that pressure. It's a lot better than coming into a situation where winning two or three games will be considered a success. That's not a lot of fun." 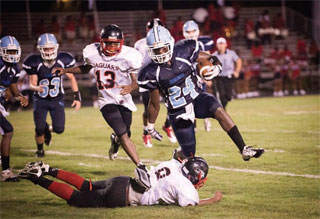 When Kevin Wald reported for his first day as head football coach at Hilton Head Prep, he found only 12 players staring back at him, barely enough to field a team and not even close to enough to hold a productive practice. But things have taken a positive turn as the Dolphins head into their second year under Wald, as 28 players reported for spring practice and the commitment level this summer has impressed Wald, who led Prep to a 5-5 record but fell short of the SCISA Class 2-A playoffs in his first season.

"When I came here, I was committed to building a program," Wald said. "I wanted to do it the right way — through character, discipline and integrity — and I think so far that's what we've done."

The Dolphins lost only five seniors off last year's team, but that group includes starting quarterback Charlie Wilmot, leading receiver Logan Clark and defensive standout Austin Baker. Prep returns perhaps its top player on both sides of the ball, though, with Teron Daley back after rushing for 751 yards and 10 touchdowns and collecting 108 tackles.

Wald expects Daley to become the focal point of the option-oriented offense and predicts he will eclipse 1,000 yards rushing behind an experienced offensive line. Daley also will anchor a defense that returns its top six tacklers from a year ago and eight of the top nine.

The Dolphins also have some question marks — including who will win the starting quarterback job with sophomores Tyler Fox and E.J. Churchich competing for the position — but most of them come from the influx of new players who didn't join the team a year ago. That's the kind of problem Wald likes to have.

For now, football fields across Beaufort County act as quiet sanctuaries belying the excitement that will begin to stir in a few short weeks. Soon, the whir of blades will cut the shaggy grass down to a fast track. The yard lines will be painted a fresh, gleaming white. The scoreboards will pop to life. The lights will again shine on Friday night.

Area private schools can begin practice Aug. 1, and public schools can follow a day later with three short weeks to prepare for the weekly ritual that captivates audiences each Friday evening in the fall.

Who will be the next breakout gridiron star from the Lowcountry? Can the Bluffton Bobcats continue their claim as a budding state powerhouse? Will Year 2 under B.J. Payne see the Hilton Head Seahawks make a deeper run in the playoffs? Can Hilton Head Christian preserve its private-school dynasty with a new coach at the helm? Or will Hilton Head Prep unseat its rival? It's time to find out all that and more in your primer for the 2013 high school football season.