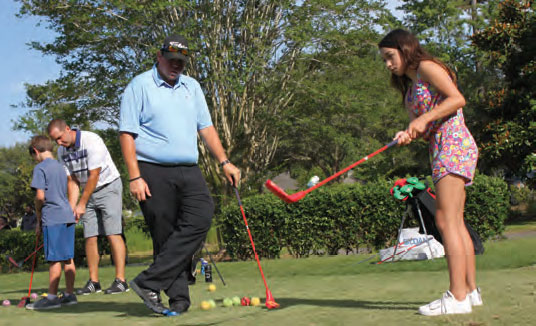 GOLF IS SIMPLE ENOUGH A CHILD CAN LEARN IT, BUT COMPLEX ENOUGH FOR A LIFETIME OF STUDY.

On a steamy summer evening at Eagle’s Pointe Golf Club in Bluffton, about a dozen parents gathered around Nick Dunham to learn how to help their kids succeed on the links and in other walks of life. Their children were participating in a six-week course on golf and life skills, presented by The First Tee of the Lowcountry.

“Our goal as a program is not to coach the next Tiger Woods,” said Dunham, the organization’s program director. “If we do, great, but our goal is to teach a bunch of great people.”

The First Tee began in 1997 as a way to provide an affordable junior golf program to communities where such a thing didn’t exist. The actual game of golf is almost an afterthought in the program’s overall mission, which is “to impact the lives of young people by providing educational programs that build character, instill life-enhancing values, and promote healthy choices through the game of golf.” 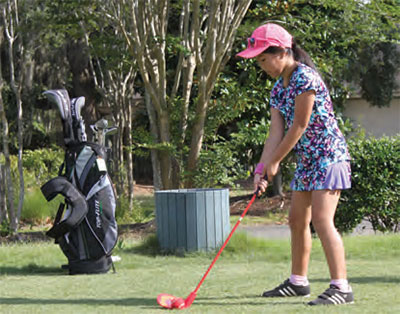 Indeed, a good portion of each session is conducted without a golf club in hand, as coaches hold court on the program’s nine core values — honesty, integrity, sportsmanship, respect, confidence, responsibility, perseverance, courtesy and judgment — and explain to students how these values apply not only on the golf course, but also at school or at home.

The First Tee of the Lowcountry was incorporated in 2014 as one of hundreds of chapters in all 50 states, but 2017 has been a watershed year in the local chapter’s development. The organization celebrated the grand opening of a dedicated facility off Hilton Head Island’s Gumtree Road in April — six months later than expected, thanks to Hurricane Matthew — unveiling the 13-acre property that includes a six-hole, par-3 course; a nine-hole disc golf course; a full driving range; a fishing pond; and a picnic area to a crowd of about 600 people.

Having a home base has allowed the program to minimize its reliance on local golf courses and expand its offerings to include hosting public events and inviting local schools to visit for field trips.

“We’re one of the few chapters that’s lucky to have our own facility,” said executive director Brady Boyd. “We control our own destiny, and that helps us meet our objective to be affordable and accessible.”

The list of volunteers and donors who made the new facility a reality seemingly is infinite, but begins with former executive director Mike Davis and initial program director Paul Caruso, who “put their heart and soul into getting this built,” Boyd said.

The grounds are open to the public daily, with fees for unlimited use $10 a day for adults and $5 a day for children ages 17 and younger. First Tee participants can use the facility for free. The property also serves as an outstanding marketing tool for the organization’s programs, which include the National School Program that takes the curriculum to physical education classes at area elementary schools.

“Visitors get exposed to our values as they walk down the sidewalk,” Boyd said. “That helps give the cause some additional exposure, and hopefully they have kids or know kids who will eventually be involved in our program.”

The new facility does present a unique set of challenges, mostly in the form of the additional expense to maintain the grounds and the number of volunteers needed to operate it. Boyd and Dunham are the chapter’s only full-time employees, so The First Tee of the Lowcountry relies heavily on volunteers for everything from helping coach young golfers to mowing the grounds.

The daily use fees for the facility help offset some of the operating costs, as does the tuition from programming, but the First Tee chapter is dependent on fundraising efforts in the community, including the Jim Ferguson Memorial Golf Tournament and the annual Champions Tournament, which is scheduled for Sept. 25 at Long Cove Club.

The best way to increase funding from the community, Boyd said, is to keep doing what they’re doing and exposing more and more people to the organization’s mission.