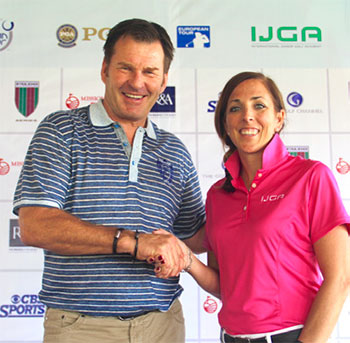 The Faldo Series, the global circuit of junior events created by six-time Major winner Sir Nick Faldo, has appointed the International Junior Golf Academy as its official golf academy partner. Rory McIlroy and fellow multiple Major champion and World No. 1 Tseng Ya-ni are among past winners on the Faldo Series, which was founded in 1996 and is supported by The Royal and Ancient Golf Club of St Andrews. Recognized as the only global amateur series for boys and girls, the annual circuit features thousands of young golfers competing in 40 tournaments in over 30 countries across Europe, Asia, Oceania, and North and South America.

Faldo, a former World No. 1, was closely involved in the new partnership after recently visiting IJGA, which is based on Hilton Head Island, and attached to the acclaimed Heritage Academy, a private school dedicated to scholar-athletes.

“I am personally excited to appoint IJGA as the official golf academy partner of the Faldo Series, as it feels like the a proper addition to the guidance offered by the series,” Faldo said. “It offers our junior players from around the advice or opportunity from a world a first-class academy to further their golf journey and education. It also provides expertise in the process or opportunity to play college golf in America. We’ve been looking at the US based academy model and when I visited the IJGA and Heritage Academy earlier this year, I knew it was a special partner. IJGA offers a safe, inspiring environment at Hilton Head, where students benefit from top-quality instruction and practice facilities, and a great variety of golf courses nearby. In addition, the staff has an expertise in the U.S. college process and many of our players have questions on how to approach that system properly.”