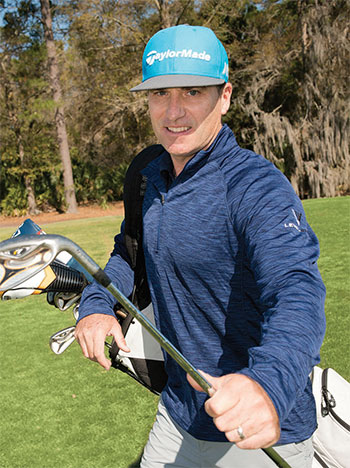 No, not those guys. The caddies. And Bluffton’s Mark Carens is proof of what a good caddy can do.

The great champions of the game of golf become revered for their athleticism, held up in a pantheon of the sports finest, their names becoming synonymous with the very concept of excellence.

Jack. Arnie. Tiger. Each a one-word shorthand for a near-mythical ability to captivate galleries with their skill and poise.

It’s only natural that in a sport whose very slogan puts the spotlight right on the players (“These Guys Are Good”), we hold a unique admiration for the players. We give them special jackets, we buy clubs and shoes and gloves with their names on them. We see our car-buying decisions influenced by how cool they look behind the wheel.

Which is a shame, because with all that adulation, we’re really missing out on the true heroes of the game: the humble caddy.

For example, Jack Nicklaus was a nice guy and all, but did he ever once handle dangerous wildlife in the pursuit of maintaining pace of play? Because local PGA Tour caddy Mark Carens sure has.

“Jonathan Byrd was hitting his third shot and we were 100 yards to the pin,” said Carens, describing an incident during the 2014 Players Championship at TPC Sawgrass. “There was this giant turtle right next to the pin so I just ran up and threw it into the lake. I saw the whole thing on TV that night and that’s when I realized it was a snapping turtle. His neck had gone pretty far back.”

He then added with a laugh, “I wasn’t thinking about that. I just didn’t want him to pee on me.”

Potential lacerations and/or soakings are just a few of the dangers facing the life of a caddy, said Carens. “I’ve seen caddies shoo alligators away with a rake when the ball’s too close to the water. My last tournament in California, my guy hit his ball into a tree so I had to climb up and see if I could get it. Whatever you can do to help your guy make the shot, you know?”

Carens turned pro when he was 18, spending 12 years playing the game before a one-off Web.com tournament led him to pursue a now 15-year career as a professional caddie. He lives in Bluffton with his wife and children, Mia and Luke.

“There are guys that just get lucky where they’re just in the right place at the right time when someone’s looking for a caddy, said Carens. “That doesn’t happen that much anymore. Caddies are taken more seriously. It’s a more professional business than it was 10 years ago.”

And that’s not just for their ability to frighten wildlife and scale trees. A good caddy, to hear Carens describe it, as much a psychologist as golf expert. “You can say the greatest thing in the world, then they hit a bad shot. It’s all experience. Your guy might be coming down to the last hole, and you see he’s tense, so you step up with a joke or try to get him relaxed and take his mind off it. If he does well, you know that’s what it was. But you could do that and he could lose his focus, so you have to get out there. The more you get used to being in the final groups, that’s when you learn what you can see.”