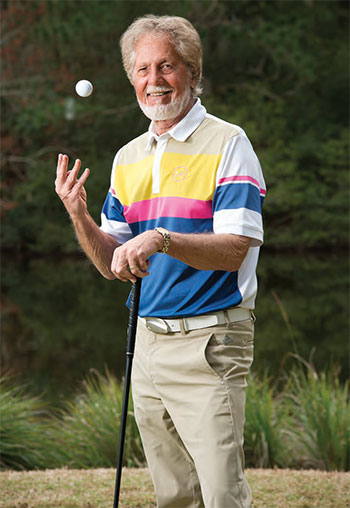 Bob Collar is an energetic fellow. He walks quickly and talks fast, especially when the subject is the Lowcountry Golf Hall of Fame. That’s his baby.

Collar, 68, started the hall of fame last year to honor the great golfers who have called this area home or whose work has elevated the game.

To create the hall, he sought advice from people like Cary Corbitt, vice president of sports and operations at Sea Pines Resort, and Mike Harmon, director of golf at Secession Golf Club. The standards for nominations are steep, and a 75 percent vote for induction even steeper.

This year, the hall will induct Corbitt and Karen Ferree in recognition of their golf careers and their work as co-founders of the Hilton Head Island Junior Golf Association.

Collar set up a small hall in The Shops at Sea Pines Center with photos of last year’s inaugural inductees. But he envisions a much larger facility that includes a museum of local golf artifacts, including flags from the more than 50 courses in the region.

Golf has always been a part of Collar’s life. He started playing at age 11, and by age 16 was the club champion at his family’s country club near Pittsburgh.

“I saw this culture unfold before me and I loved it,” Collar said.

He played briefly for Clarion University and Grove City College before he and a friend headed south so they could play year-round. They ended up caddying in Miami.

Shortly thereafter, Collar was drafted and served on special services for the U.S. Air Force. Yes, that meant he played golf for Uncle Sam throughout Southeast Asia.

After his service, he eventually returned to the Pittsburgh area, working in the steel industry. During a downturn in the mid-1990s, he and his wife, Brenda, agreed it was time to move with their two children to Hilton Head, where they had spent vacations.

He ran a home renovation company for nearly 20 years, but now dedicates his time to golf, either bolstering the hall of fame, planning amateur tournaments or playing a round to maintain his 1.6 handicap.

The hall is atop Collar’s work for the past 11 years as director of the popular Hilton Head Island Amateur Golf Association. He’s in charge of planning seven annual tournaments for its 266 members.

One of his favorite memories was when the amateur team beat the area club pros in the Honors Cub after a long losing streak.

“It was like winning the Ryder Cup. We were running around yelling, ‘We’re No. 1!’”

It was at one of those events that prompted the idea for the hall of fame.

“We’re surrounded by some of the best courses in the world with some of the world’s best players. We need to honor that,” he said.

And a local golf hall of fame was born.