LPGA Pros in the Fight to Eradicate Breast Cancer take to Daufuskie’s Haig Point on September 22. 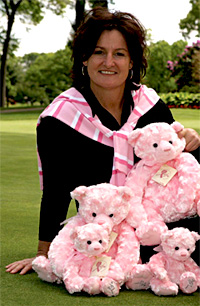 The LIFE (LPGA Pros in the Fight to Eradicate Breast Cancer) in the South event, hosted by the Val Skinner Foundation, will take place September 22 at the Haig Point Golf Club on Daufuskie Island. LPGA pros scheduled to participate include Hall of Fame members Beth Daniel and Nancy Lopez, and pros Laura Diaz, Christina Kim and Brittany Lincicome, among others.

A clinic, titled LIFE’s Lessons, will be offered to sponsors who are still learning to play golf. This clinic will be hosted from 11 a.m. to 12:15 p.m. by former US Open and LPGA champion Jane Geddes and South Carolina Teacher of the Year Krista Dunton.

Rinaldi had a 15-year career on the WTA tour where she reached a career-high ranking number seven in the world. She was the youngest player to win a match at Wimbledon in 1981, a record that stood for a decade. Rinaldi won three singles events and two doubles events.