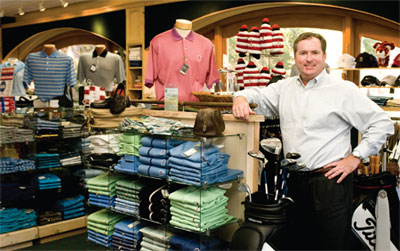 So, it’s no wonder Harbour Town’s PGA Head Golf Professional, John Farrell, says that now is a more exciting time than ever at Harbour Town. And if someone should know, it would be Farrell, who’s been a dedicated member of the Harbour Town Golf Links staff since 1991.

A golf enthusiast since the age of seven, when his father introduced him to the sport, Farrell, 46, said he enjoys life on all sides of the greens.

“I knew early on that I didn’t want to just play,” Farrell said. “I like the business of golf.”

Farrell moved to Hilton Head from Pittsfield, Mass., where he grew up the seventh of nine children, in 1984. For him, choosing the island was a no-brainer. “The reputation for its golf courses and golf professionals was fantastic,” Farrell said. “And it still is.”

Once relocated to the island, Farrell took a job at the Shipyard Golf Course, which was hosting a Senior PGA tournament at the time. This gave Farrell his first taste of professional tournament action – further cementing his desire to be involved in the sport.

Now, with 12 Heritage Tournaments under his belt and the 13th on its way, Farrell’s attraction to the golf world is still as strong.

“There’s never been a day when I didn’t want to go to work,” Farrell said. “It’s a real pleasure to be around the game.”

Farrell said he also enjoys the variety of his job – like at last year’s Verizon Heritage tournament, when his primary focus required a change from monitoring retail sales and player accommodations to monitoring crowd safety due to the powerful winds that resulted in suspended play.

“I like the challenge of not knowing,” Farrell said. “It’s not all predictable.”

But each year it all boils down to one thing. “It’s all about the people.”

From the year Nick Price took the time to get to know each member of the locker room staff or the time Davis Love III befriended a group of children on the driving range, Farrell said each tournament represents a great set of memories.

The charitable component is also a significant arm of the tournament. According to Farrell, the Heritage Classic Foundation has donated more than $16.6 million to various area charities since it was organized in 1987. Last year alone, the not-for-profit organization gave $1.8 million to charity.

And this year could be even better, considering the excitement ramping up at Harbour Town. Last year’s opening of Sea Pines’ Heron Point Golf Course, home of this month’s Pro-Am tournament, and Farrell’s designation as the 2007 recipient of the South Carolina Golf Association’s Tommy Cuthbert Award, an annual award given to an exceptional golf professional in South Carolina, are recent highlights for Farrell.

A flattered recipient, Farrell said Cuthbert, who was the director of golf at Kiawah Island Golf Resort, was a genuine example of a Southern gentlemen. “I am honored to receive an award that bears his name,” he stated. Having spent half of his life living in the world of golf on Hilton Head, Farrell’s secret to enjoying a sport with which so many have a love/hate relationship is simple: Optimism and a good attitude are key.

“Just go out and have fun,” Farrell said.