Since 1969, the PGA Tour has been coming to Hilton Head Island to test the world’s best players at the Harbour Town Golf Links, a Pete Dye masterpiece that the golfing community has claimed as the birthplace of the modern golf course. It’s a perfect fit to the state that was the first to recognize the game of golf, dating back to 1786 with the South Carolina Golf Club in Charleston, and the traditions of the game of golf are alive and well at Harbour Town.

The golf course was the central focus of the Sea Pines development and was the vision of Charles Fraser, the mastermind behind Sea Pines and the development of Hilton Head Island. He wanted the world to know that South Carolina was the first state to recognize the game of golf, and Fraser wanted a course that would complement this piece of history. He relied on the wisdom of Jack Nicklaus as a design consultant, and hired at the time the relatively unknown Pete Dye as the main architect. The idea was to produce a golf course that was reminiscent of the old courses of Scotland, complete with small, undulating greens and unforgiving greenside bunkers known as pot bunkers. The final product was a course that embraced the old traditions of golf course design with a progressive, modern edge that stood apart from the courses in the United States at the time.

The tournament was originally scheduled to debut at the Ocean Course at Sea Pines in 1968 but was pushed back one year so it could be hosted at the newly constructed Harbour Town. The tournament was held Thanksgiving weekend, 1969, and the inaugural event was won by Arnold Palmer. This put Harbour Town on the map and proved that the course was a worthy challenge to the world’s greatest golfers. It immediately gained quite a bit of publicity for the Sea Pines development and for the island itself, making Hilton Head a household name.

The tournament was an instant success and produced such winners as Tom Watson, Jack Nicklaus, Johnny Miller and Nick Faldo. In the mid eighties, the Sea Pines Company ran into a bit of financial trouble, causing the future of the tournament to be in jeopardy. Charles’ brother, Joe Fraser, came to the rescue with a few investors and founded the Heritage Foundation, the governing body of the Verizon Heritage Golf Tournament, and the tournament has since matured into one of the best events on the PGA Tour schedule.

The Heritage Foundation immediately made an impact on Hilton Head Island by raising $133,695 for charitable organizations in 1987. That number has since grown to a staggering $1.9 million dollars in charitable funds with over $200,000 dollars going to nine local area charities. The total number of dollars raised by the Verizon Heritage Golf Tournament has raised $14.75 million since 1987, making this event more than just a golf tournament. The Heritage Foundation has made an incredible impact for those in need. In 2006, the Heritage Foundation donated $1.3 dollars to 98 non-profit groups in Georgia and South Carolina, and this year charitable donations are expected to topple last year’s record of $1.9 million dollars. 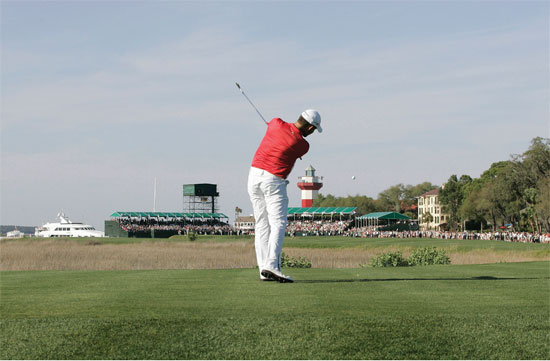 The tournament itself has hosted some of the world’s best players, including some true legends of the game. Davis Love recorded his first PGA Tour victory here and has won a total of five Verizon Heritage titles. Only Hale Irwin has come close to that number with three victories. Only Davis Love and the late Payne Stewart have successfully defend their titles back to back with Love winning in 1991-92, and Stewart in 1989-90. The list of previous winners reads like a who’s who in golf: Johnny Miller, Jack Nicklaus, Hubert Green, Graham Marsh, Bernhard Langer, Fuzzy Zoeller, Greg Norman, Bob Tway, Nick Price, Stewart Cink, Justin Leonard and The Boss Of The Moss, Loren Roberts. Spanish Moss is found in almost every tree on Hilton Head and in the surrounding area and it often makes its way onto the putting surface at Harbour Town. Roberts is well known for his excellent putting ability, and after his 1996 win at which he put on a putting clinic for 72 holes and won with a total of -19 under par 265, he earned the nickname Boss Of The Moss.

Since 1969, the only two players who have won a major and not participated at Harbour Town are Paul Lawrie and Ian Woosnam, and this year Woosnam has committed to playing. Maybe someone should call Lawrie and tell him Van De Velde might be there. Previous champions of the Verizon Heritage have a total of 67 majors under their belt, and all members of previous Ryder Cup teams since 1969 have participated at Harbour Town. Total number of PGA Tour victories by previous Verizon Heritage champions? 338. That’s an average of twelve victories per player.

One of the greatest attributes of the Verizon Heritage is that is always falls on the week after the Masters in Augusta, Georgia. The scheduling is a blessing because it puts some of the world’s greatest players from around the world a mere three-hour drive from Hilton Head; the Verizon Heritage is a great relaxer for a lot of players escaping the pressure from playing at Augusta. It also allows PGA Tour members to bring their families to the tournament and enjoy some quality family time in a sport where the players are constantly on the road and away from their families. The island is a perfect place for everyone to be together while Dad goes to the office and tries to win $972,000. Some of the wives of the players hold an annual tennis tournament on Hilton Head during the tournament, and the kids can always enjoy the beach and a variety of outdoor activities. The Verizon Heritage is kind of like Spring Break for the families of players on the PGA Tour, and Hilton Head Island is the perfect venue for such a celebration. 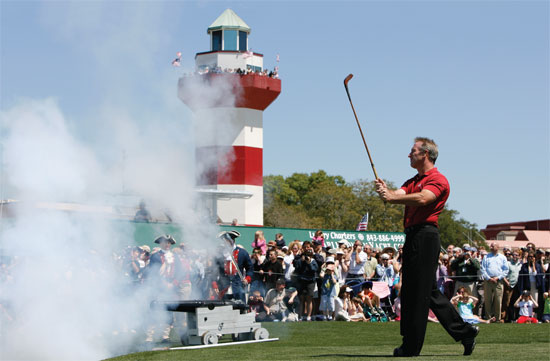 Behind the scenes at the Verizon Heritage are 1,200 volunteers who really make the difference. They do everything from player shuttle services to manning the concessions. Without them there would be no tournament, and no one understands that more than tournament director Steve Wilmot. Joining the Heritage Foundation in 1997, Wilmot has seen an increase of almost four million dollars raised for the tournament purse.

“We hope that this increase will once again assure us a quality field of the world’s top professionals,” said Wilmot. “Not only do we bring the best golfers in the world, our special exemptions into the tournament allow some of the best amateur players to test their skills against the pros.” Wilmot is also the tournament director for Belfair’s Player’s Amateur, held at Belfair’s West course in nearby Bluffton. Now one of the best amateur tournaments in the United States, the winner earns an exemption into the following year’s Verizon Heritage tournament. Wilmot also grants a special exemption into the tournament for any amateur player who exemplifies the professionalism and the attitude that best matches this prestigious event.

If you are planning on going to this year’s Verizon Heritage, here are a few tips to ensure an enjoyable day on the links; always remember that cameras and cell phone are never allowed from Thursday through Sunday, but for practice rounds, cameras are acceptable. Do not bring any coolers, signs or banners, or backpacks larger than a small purse. Always display your badge when on the grounds and remember that although it’s a rather relaxed atmosphere at the tournament, be respectful of the players and make sure not to interfere in any way. Stay behind the ropes and follow the directions of tournament marshals.

Autographs are to be conducted before and after the player has played and never during the round. Remember, this is the player’s office, their place of work, so treat them as you would want others to treat you at your place of work. Parking is a bit limited, so if you plan on driving, arrive early or take one of the many shuttles available for spectators. 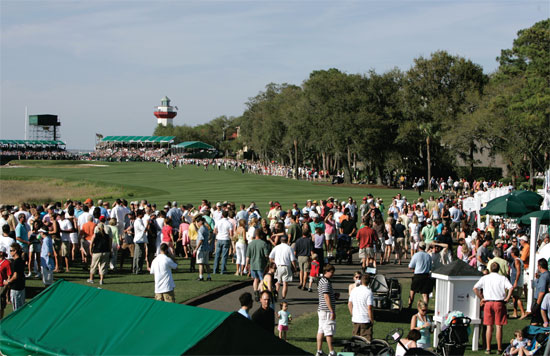 Ticket prices and other details can be found at www.verizonheritage.com and any other information concerning the tournament can also be found at this site. Technologically challenged? You can also call 1-800-234-1107, or at (843) 671-2448 locally, to inquire about tickets and general information concerning the tournament. Badges can also be purchased at the tournament headquarters, located at 71 Lighthouse Road, Suite 4200. Any tickets purchased prior to the event by phone will be available at Will Call in front of the Sea Pines welcome center, located just before the main entrance to Sea Pines on Greenwood Drive from Tuesday through Sunday.