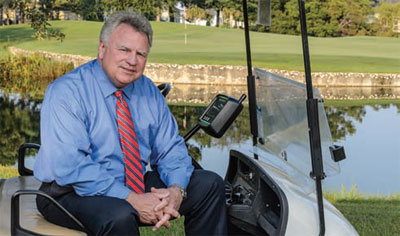 Since his 2011 purchase of Pinecrest Golf Club and subsequent acquisition of Is land West soon thereafter, John Brown has made an indelible mark on the Hilton Head/Bluffton golf industry in a very short period of time.

His most recent move, however, has absolutely changed the landscape of golf membership in the region. Brown, the co-founder and president of Brown Golf Management, assumed ownership of popular Bluffton sister courses Eagle’s Pointe and Crescent Pointe on Aug. 1 through a venture-capitalist partnership, greatly increasing the company’s profile in the region’s vital golf industry.

In fact, not only does the purchase create a foursome of Lowcountry layouts to offer its growing membership base and its daily-fee players, it makes Brown Golf the second largest golf course operator in the Hilton Head region behind only Heritage Golf, which has six island facilities.

As a result of the purchase, every one of the operator’s 520-plus members will have access to all four courses as part of their current membership program with no increases in annual or monthly dues forthcoming, said Brown.

The end result is one of the strongest and most unique non-equity golf club membership programs in the region that will benefit golfers of all income levels.

“We’re going to operate all four clubs as one unit,” Brown said of the integration of Eagle’s and Crescent with Pinecrest and Island West. “From a membership perspective, all of our members will have access to every one of our clubs here in this market.

“We haven’t changed our pricing on that really since we had only one club. That’s been our philosophy on membership since we began.”

Both courses, which have been part of the Bluffton golf landscape for more than 15 years, mesh nicely into Brown Golf’s existing 36 holes and into the company’s philosophy of mixing strong value with quality golf and consistent conditioning.

Like Island West and Pinecrest “The Pointes” have full-service clubhouses, sizeable practice facilities and layouts that are challenging but fair for players of all levels.

Crescent Pointe, Brown said, needs some improved landscaping and some work on its overall conditioning as well as its bunkers. That work is already underway.

“These are two pretty darn good golf courses,” Brown said. “We’ll do a good bit of clean up, but from the golf course perspective we’re not planning any major changes.”

The addition of the two new courses along with the existing membership benefits and affordability, have had an immediate impact on the growing company. In August alone, 115 new members were added over and above the 75-plus it inherited at Eagle’s Pointe and Crescent Pointe combined.

“We’ve seeing more young families join and that’s a great thing not only for us but for the game,” he said. “We’re creating an affordable and enjoyable golf and social environment unlike anything else in Bluffton.”

Those new members will benefit from an aggressive instruction program that Brown rolled out when he took over at Pinecrest and has built upon since. Every member and their extended family receive free and unlimited instruction from Brown Golf’s teaching team, which is led by Director of Instruction Terry Miskolczi.

The idea, Brown said, is to increase golfers' comfort level with the difficult sport and to keep them enjoying it much longer than they would without lessons and affordable opportunities for improvement.

“Golf is a difficult game and access to quality affordable instruction has been a barrier to the sport’s growth,” Brown said. “We see our instruction program as a great retention tool for us. Not only are we helping our members improve, we’re increasing their enjoyment of the game and that will keep them playing more often and for a longer period of time.”

While membership is his primary focus, Brown is also excited about the opportunity to not only increase daily-fee play among locals, but resort business from the island as well.

Brown Golf will extend its year-long local rates for golfers from Beaufort, Jasper and Chatham counties to both Crescent and Eagle’s Pointe and at the same time will take a more aggressive approach toward attracting out-of-market play with 72 holes of quality golf to package and present.

“We’re going to blend the two philosophies of serving our local golfers while also appealing to the visitors who come here every year,” Brown said. “We have an opportunity now to widen the appeal of our golf courses and that will give Bluffton a larger voice with the visiting golfers as well.”

The value-oriented, growth-of-the-game approach has not only served Brown well in the Lowcountry, but well beyond as well.

Coupled with its local layouts, the company owns nine golf courses in Florida, South Carolina, North Carolina and Pennsylvania, and was expected to close on its 10th facility in Albany, Ga. in mid- to late September.

In addition to those facilities, Brown Golf also manages six others in the Northeast bringing its total sphere of influence to 16 golf courses. The company has also completed numerous consulting projects for courses looking to streamline operations.

While Brown acknowledges the growth of his company may slow a little bit to allow for the operations to adjust, further expansion in the near future is a distinct possibility — and that includes in the company’s own Lowcountry backyard.

“Obviously, we’re very pleased with our footprint here right now,” Brown said. “But I don’t think we are done in this market yet. We’re still looking for opportunities that fit our philosophy.”

Given the speed with which Brown Golf Management has grown in just three short years, who would expect anything less?