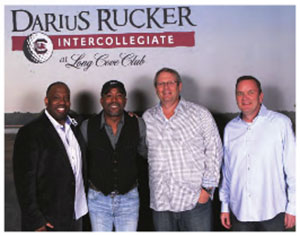 Country music icon Darius Rucker returns to Hilton Head Island this month to once again support the collegiate golf tournament that bears his name. Yet with all due respect to the former Hootie and the Blowfish frontman, the true stars of the week will again be the talented women golfers walking the fairways and stalking the greens of the famed Long Cove Club.

For the fourth consecutive year, the fast-growing Darius Rucker Intercollegiate will be held March 5-8 on the south end of Hilton Head. As in the first three years, the tournament will feature many of the top collegiate teams in the nation, highlighted by defending champion Duke University, SEC powers University of Alabama, University of Georgia and Louisiana State University, and ACC stalwarts University of Virginia, Wake Forest University and University of North Carolina. The University of South Carolina is once again the host team, and is among the favorites to capture the tournament title for the first time.
“I expect to see a lot of great golf played here during this tournament,” said Bob Patton, Long Cove’s director of golf and one of the driving forces behind bringing the event to the island several years ago. “We try each year to attract the strongest field we can to the event, and this year, led by the defending champion Duke, is no different.”
The 54-hole tournament, which has been played at the Pete Dye-designed Long Cove Club since its inception is free and open to the public. The stroke play event will again be preceded by a practice round on March 5 and the traditional invitation-only live performance by Rucker at the Arts Center of Coastal Carolina — a staple of the event.
“When we had the idea of starting this tournament, we reached out to Darius about putting his name to it, and he quickly came on board,” Patton said. “The private concert he puts on is really a highlight of the week, and it’s something the players, coaches and parents look forward to. He has really been great to this event.”
Attracting some of the best teams from several top conferences, including Arizona State from the Pac-12, the Rucker Intercollegiate has quickly risen among the ranks of spring-season women’s collegiate golf events.
That fact was evident during the 2014 tournament, which was ultimately dominated by the Lady Blue Devils. Not only did Duke win the team competition, but then-freshman Yu Liu staged a final-round rally to wrestle the individual title from former Hilton Head Islander and Alabama star Stephanie Meadow. Meadow turned to the LPGA Tour at the close of her senior year at Alabama and went on to a top 10 finish at the U.S. Open last June.
Having also turned pro following her freshman season, Yu won’t be on Hilton Head to defend her title, but the Lady Blue Devils still return plenty of talent capable of repeating in 2015. To accomplish that, however, the reigning 2014 NCAA champions will have to deal with at least 10 other teams that are ranked among the top 25 (as of late January rankings) by Golfweek.
That list is led by the Lady Gamecocks, who entered February as the No. 2 team in the nation. South Carolina is led by the duo of Nanna Madsen and Justine Dreher, who are ranked fourth and 14th respectively in Golfweek’s individual rankings.
“I know they feel really good about their team this year,” Patton said of South Carolina. “It would be great to see them challenge for the title. We have a lot of members that are Gamecocks.”
Also ranked among the top 10 are Arkansas, Mississippi and Wake Forest. Ranked among the top 20 are Vanderbilt, Tennessee, Virginia, LSU and Auburn. Alabama, the 2012 and 2013 Rucker Intercollegiate champion, was 25th in early February.
“There are a great number of teams capable of winning this event, including Duke, who doesn’t rebuild, they reload,” Patton said. “I have no doubt the tournament won’t be decided until late (on Sunday).”
The competition for the 2015 individual title will be just as fierce given the depth of the field. Led by Duke’s Leona Maguire (No. 3) and Carolina’s Madsen, the talented field includes 10 players ranked among the top 25 in the sport. Those golfers will once again challenge the formidable Long Cove course that has proven to be such a quality home for the region’s only collegiate event.
The Dye course can stretch to more than 7,000 yards, although it won’t play nearly that long for the Rucker Intercollegiate. Players will, however, be forced to deal with the multiple hazards, strategic bunkering and fast-rolling, undulating greens that truly make the tract so special. In the event’s first three years, golfers have found it difficult to get much under par, and a similar challenge likely awaits this year.
“The golf course will certainly be a challenge and a good test,” Patton said. “But these girls are really talented players. I sit on the tee and marvel how far they can hit the ball. Some of them hit the ball out there 300 yards.”
If the first three years of the Darius Rucker Intercollegiate are any indication, Patton’s assessment of what we’ll see at Long Cove this month is spot on. With the best collegiate women golfers taking on one of the most respected courses in the country, how could it possibly be anything other than must see golf for a fourth consecutive year.