It was a stupid crash, Chris Butler recalls, a fluke pileup during the penultimate lap of the Clásica de Almería race Feb. 12 in southeastern Spain.

From that stupid crash came months of stupid luck.

The accident left him with a fractured elbow, which would have been bad enough, but things got worse for Butler, a 29-year-old Hilton Head Island native and Hilton Head Christian Academy graduate. He wound up losing more than three months of his season to the injury.

As is often the case, though, it could have been much worse. 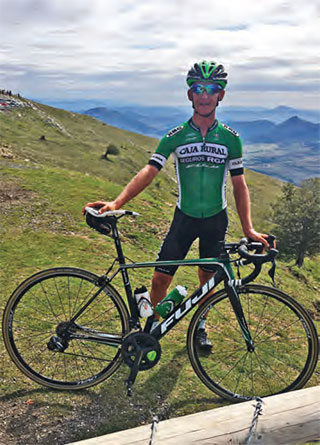 Butler was a latecomer to the sport of cycling, but he quickly made up for lost time. He bought his first road bike at age 19 and joined the club team at Furman University. Less than three years later, he was riding professionally and training with legendary cyclist George Hincapie. By 2011, he was competing in the top European stage races for the acclaimed BMC Racing team.

After his meteoric rise, Butler’s career leveled off. He continued to improve, but found himself bouncing between teams. After spending 2016 riding for Israeli outfit Cycling Academy Team, Butler signed in January with Spanish team Caja Rural, his fourth team in four years. Though this nomadic existence has made for an interesting life —Butler has raced all over the world and lived in Hong Kong, Israel, Italy and Spain — he hoped to find some stability with Caja Rural.

Then came the stupid crash.

Butler was toward the front of the peloton, which was slowly maneuvering around a roundabout when another rider came in hot, flying off his bike and into Butler, who did what he calls a “Macho Man Randy Savage elbow drop on the asphalt.”

Three weeks after having surgery to repair the fracture, Butler found himself under the knife again when the rod and wire holding his elbow together shifted. The surgeon opted for a different method the second time around, meaning Butler would be prohibited from outdoor cycling for seven weeks.

Then in mid-April, doctors discovered that Butler had developed a rare, often fatal bacterial infection, leaving him virtually bed-ridden for three weeks while he was pumped full of antibiotics. Butler had gone from averaging 100 miles a day on his bike to spending the better part of a month in a hospital bed.

His doctor said Butler’s season was over and that he should be happy to be able to take leisurely walks for the rest of the year. Butler disagreed.

“I’m pretty headstrong,” he said. “Those weren’t the terms I wanted to go out on.”

As soon as he was able, Butler resumed training, despite the brace on his surgically repaired elbow. He set his sights on joining the team for its trip stateside in August to compete in the Tour of Utah and the Colorado Classic — the two biggest stage races in the U.S. His goal was just to finish both races, Butler said, but he defied expectations in Utah, finishing eighth overall to lead the team and fourth among American riders.

He found similar success in Colorado, finishing 16th overall and seventh among Americans. Finally healthy and legs well-rested from his time away from his bike, Butler has high hopes for the rest of the 2017 season and beyond.

He also has been buoyed by countless notes from friends and family back on Hilton Head, where his parents still live.

“So many people have invested in me, and a lot of people back home are living vicariously through me,” Butler said. “This is my God-given talent. This is what God has given me to do, so I’m trying to honor that and give it the best I have.”