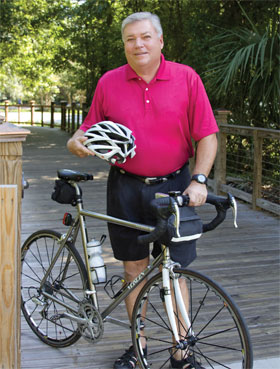 Immediately after relocating to Hilton Head Island, Frank Babel began looking for a cause.

“(Professionally), I traveled all the time, so it was hard to do community service,” said Babel. “When I retired here, I wanted to make a difference.” It didn’t take long to find that calling. An avid bicyclist, Babel has become one of the island’s foremost advocates for bicycling safety and awareness. He founded an advocacy group with local bike shop owners, has been elected to a statewide cycling coalition and works with numerous local government agencies on bikerelated projects. But his vision continues to grow.

“There’s a saying: ‘If you build it, they will come,’ ” said Babel. “And they are coming. The pathways are packed.”

Like many of his generation, Babel rode his bike to school and around his neighborhood as a boy. But it wasn’t 1990, when he worked in Dallas as a business developer for Electronic Data Systems, that he really became a fixture at trails and races.

Babel moved permanently to Hilton Head five years ago, but shortly after his relocation, he began noticing that the island’s web of pathways was often unkempt, even sometimes filled with debris. He also noticed that there were no maps tying the beaches, parks and pathways together. That’s where Babel spotted his opportunity.

The first thing he did was begin writing reports to Beaufort County Parks and Leisure Services about trouble spots on the pathways. His initial tactics, he admits, were a bit abrasive. “At first there were some people who thought, ‘Who is this guy?’ ” said Babel. “At the beginning I was stupid about it. I criticized more than I congratulated.”

But Babel soon settled into more effective methods, and before long was charged with creating that new map, one that included pathways, parks and beaches. Next, he set out to increase the number of bike kiosks on the island, of which there are now about 40.

Still, Babel began to realize that though going alone might help with individual problems, it wouldn’t do much to change the overall cycling outlook. So in conjunction with local bike shop owners, he launched the Squeaky Wheels Cycling Advocacy Group, which gave a greater voice to pursuing improvements in safety and awareness on the island. Since then, he’s taken his quest to the state level, having been elected one of four Lowcountry representatives on the board of directors of the Palmetto Cycling Coalition.

That’s good news, since there’s plenty of work to do. Babel’s next big project, the fourth annual Pedal 4 Kids event, returns Sept. 25. Staged in conjunction with the Boys and Girls Club, it’s a recreational ride of various lengths that typically attracts up to 400 riders. In its first three years, the event raised a combined $100,000; Babel said that as of early August, donations for this year’s edition had already topped $40,000.

And he remains driven by his grand vision for the island: recognition as a ‘Bicycle Friendly Community’ by the League of American Bicyclists, a national advocacy group founded in 1880. Currently, of the 130 cities and towns that claim the recognition, only three are in South Carolina. Babel wants Hilton Head to become the fourth. “I think we could get it in 2011,” he said.

Though retired, Babel says he works nearly 30 hours a week at his new “job.” He jokingly laments his golf handicap has dropped from an 8 to a 16 and that he spends less time on his bike than before. But if that means creating opportunities for other riders on the island, it’s worth the effort. And the old business executive returns when describing the work that remains: “We’ve got the hardware built,” said Babel, “now let’s build the software.”

Registration is open for the Lowcountry’s largest bicyclist event, benefiting the Boys and Girls Club. Pedal 4 Kids begins at 7:30 a.m. Sept. 25 at Hilton Head Island High School. The event offers four different routes for bicyclists of all ages and skill levels: a 40-miler, a 20-25-miler, a 10-miler and a family fun ride.
Cost is $30 for adults and $10 for students. Children 5 and under ride free.
Details and registration: 694-3197, www.bgchhi.org