FACT
The Town of HHI spends $175,000 per year maintaining bike trails and bike lanes. Since 2010, it’s spent $1 million on bike trails, including construction and rights of way. 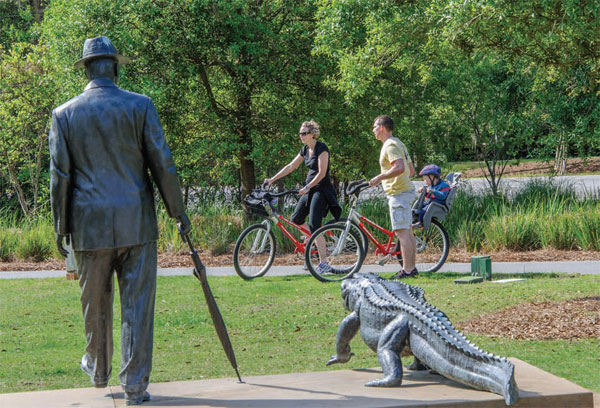 Tooling around Hilton Head Island on beach cruisers is nearly a requirement to experience the true Hilton Head.

From miles of beaches to more than 100 miles of paved pathways, it’s the way to get around, relax and enjoy the scenery. But it didn’t happen overnight.

Like much of the ambiance that makes Hilton Head Island a top family destination, it started with island developer Charles Fraser. 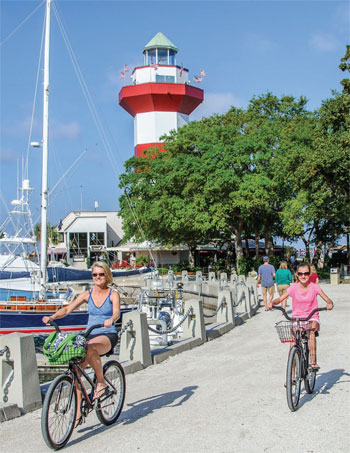 “We changed the name from bike paths to leisure trails and widened them so they would accommodate both purposes — pedestrians and bicyclists,” Ovens said.

“We tried to connect all of the systems, to put a net over the area if you will,” Ovens said.

Efforts were somewhat constrained where lots had already been platted and sold because some owners objected to a portal that would bring bicyclists and pedestrians past their windows.

But the rest of the development was a blank canvas, Ovens said.

Designers also had a lot of room with which to work: The development spans 4,600 acres.

“Fraser took a quarter of it for open space,” Ovens said, noting it was an unheard-of commitment. People think most of that open space is consumed by the 600-acre forest preserve, but that’s only half of the area left blank, Ovens said. That acreage became the foundation of the 15-mile trail system.

“Charles wanted to keep the trails away from the road,” Ovens said. “He didn’t like that, with them right next to the road.”

Instead, he wanted the trails to weave among the trees and give bicyclists and pedestrians a closer encounter with nature. He chose asphalt over concrete because it blended in better and wouldn‘t crack like concrete.

“It was brilliant at the time,” Ovens said. “He didn’t do a lot of sporting activities, but he saw their importance for a family-oriented destination.”.

By 1980, the 1,500-bike rental fleet in Sea Pines and Hilton Head Plantation sold out often, according to records kept by Truitt Rabun, a land planner who moved to Hilton Head in 1972.

Despite the popularity of the trails in Sea Pines and Hilton Head Plantation, they pretty much ended there.

“By the late 1970s, there was only one path on a public road, the one from Sea Pines to Coligny Plaza,” Rabun said. Sea Pines built it with the hopes others would maintain it, but no one did.

To try to extend the trail system beyond the gates, Rabun and other bike enthusiasts formed Pathways for Safety Committee, an offshoot of the Hilton Head Island Chamber of Commerce, to plead for funding from anyone who would listen. But because Hilton Head Island was then just an unincorporated part of the county, it wasn’t a high priority, despite repeated, well-researched appeals.

The group rallied support from all of the resorts, the Sierra Club, land planners, national biking groups, even Palmetto Electric, which was amenable to allowing bike paths along their utility rights of way, Rabun said.

They often cited seeing a woman pushing a baby stroller in a traffic lane of Pope Avenue because she had no other choice.

The arguments for sidewalks and biking trails were sound, but the money was absent.

The state attorney general had ruled that state highway funds couldn’t be used for bike paths because users didn’t pay gas taxes, which in turn fed those coffers.

Federal grants usually required 50-50 matching and ongoing local maintenance. There was no kitty for the matching funds and no entity that could promise maintenance.

Seven years of work resulted in little. The S.C. General Assembly approved funding in 1983 for a single mile of path along Pope Avenue.

“The only way bike paths were going to happen is if there was a town,” Rabun said he realized in the early 1980s.

Once the town was formed in 1983 and was able to levy taxes, it built bike and leisure paths with abandon. The town built miles and miles of pathways, but then ignored them.

Frank Babel, a retired IBM executive from Dallas who moved to Hilton Head about eight years ago, immediately noticed the poor condition of the bike trails. 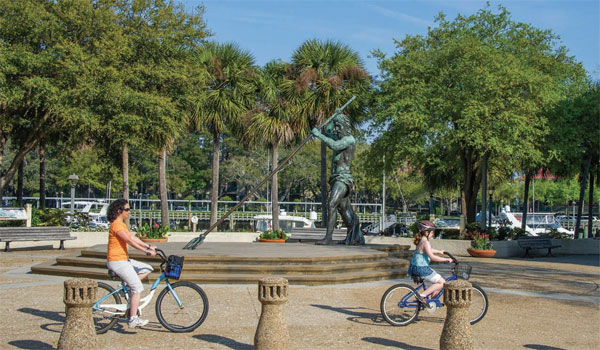 “I traveled a lot. When I started riding here, I was distressed. There was a lot of debris and root and branch intrusion on the paths and a lot of the dots weren’t connected.”

Babel, now co-chairman of the HHI Bicycling Advocacy Committee, began a weekly ride to chronicle the condition of the trails and reported back to the town.

“The town at that time was just building pathways,” Babel said. “They were doing the hardware, but not the software, so to speak.”

Babel also looked for a trail map, but instead found maps for beach access and others for parks.

“The beach map had no access points for bikes,” Babel said. “I found a bike map that was mimeographed that you could barely read and didn’t show the beaches or the parks.”

Babel spoke up at public meetings to raise the need for a bike trail system.

He got to know bike shop owners and other bikers and formed a community group called Squeaky Wheels Bicycle Advocacy Group. “It gave me an umbrella organization to deal with island issues,” he said.

He went to the Greater Island Council, but didn’t get a lot of attention there either. “These are people who want to talk about roads, not bikes, so I was a pain there, too.”

A lightbulb went off for Babel when he heard that Spartanburg earned one of the state’s first Bike-Friendly Community designations from the League of American Bicyclists about six years ago.

“I was complaining about anecdotal things,” Babel said. Now he and the group had a tangible goal that provided a framework and milestones to elevate the status of biking on the island.

“I worked for EDS and sold locomotives to countries. I’m used to big deals. I don’t play checkers, I play chess,” Babel said.

They started working on the planning and the league’s five Es: Engineering, Education, Encouragement, Enforcement and Evaluation and set up volunteer forces to address those issues.

A plethora of bike clubs emerged, the largest being Kickin’ Asphalt, which was formed in 2006. Kickin’ Asphalt set up a fundraiser for the Boys & Girls Club called Pedal 4 Kids, and they helped maintain the public trails. With guidance from the statewide Palmetto Cycling Coalition, bike safety classes sprouted for all ages and level of riders.

Eventually, the Hilton Head Island-Bluffton Chamber of Commerce also realized that biking was a primary reason people came to Hilton Head, along with golf, tennis, dining, fishing and the beach. It too began promoting Hilton Head’s biking appeal on its website and promotional materials.

By the time the town took up the charge in 2010 to get a Bike-Friendly Community designation from the League of American Bicyclist the following year, much of the work was already underway on all fronts: maintaining trails, adding well-marked pedestrian crossings and safety islands in the middle of busy streets, putting up stop signs for bikes and walkers at road intersections and sprinkling the island with bike racks.

Not only did the island get designation as a bike-friendly community in 2011, it got the state’s only silver award. Six South Carolina cities sport bronze awards.

“We formed another committee, the HHI Bicycling Advisory Committee, so we wouldn’t lose momentum,” Babel said. “We want to make the island safer and more bike-friendly for the entire island.”

“It’s important to note that it took a lot of yeoman’s work by individual volunteer committee members and town staff in developing our bicycling- friendly infrastructure to take a swing at this designation and hit a home run with the Silver Award with our first application,” Thomas said. 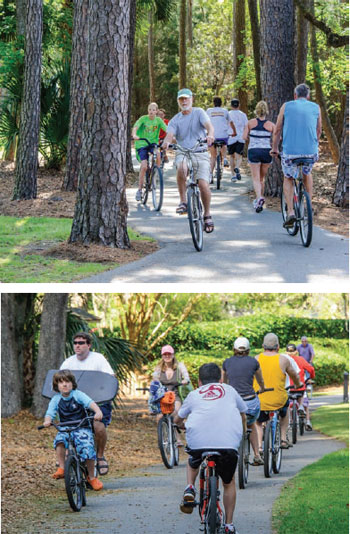 Today, Hilton Head has 112 miles of bike trails, paths and lanes, with 50 of those miles in gated communities.

“The last 10 to 12 miles have been really important connections,” Babel said, citing those along Mathews Drive and Pope Avenue.

Another new draw is a 2-mile off-road trail at the town’s Crossings Park, but it’s up to volunteers to maintain it for now.

There is no question every entity on Hilton Head Island sees the popularity of biking on the island.

“Biking is one of the most popular activities visitors do, no matter what their age, no matter how long it’s been since they were on a bike,” said Rob Bender, director of recreation at Sea Pines Resort.

“The other beauty is the ability to ride on the beach. It’s unique. We encourage our visitors to enjoy that.”

The resort is more than willing to do the extra work to clean the saltwater and sand off their rental bike fleet.

“We do a good job of cleaning, maintaining and replacing bikes when needed.”

Demand for bike rentals within the resort has gone up 25 percent in the last three years, Bender said.

In fact, there are so many bikes in Sea Pines, they ask riders to stick to the trails rather than roads and don’t allow people to pedal into the resort.

“You need to be staying as a guest to bike in. Otherwise you have to bring your bike on your car,” Bender said. “It’s because of the limited amount of trails.”

However, they are considering adding trails to the forest preserve.

It’s all an effort to draw generation after generation of families to Hilton Head Island.

As Bender said, “You talk to people who vacationed here as child, and riding bikes along the beach and the trails are their fondest memories.”

And now there is an island-wide, well-maintained trail system that welcomes even more riders.