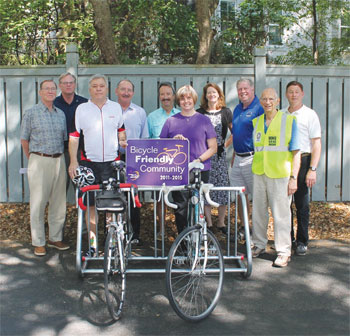 There is a group that never wants Hilton Head Island to forget about the importance of bicycling to the local economy.

The HHI Bicycling Advocacy Committee, formed after the island earned a silver award in 2011 as a Bike-Friendly Community from the League of American Bicyclists, tirelessly creates and promotes bike-related events and efforts in order to weave bicycling into the fabric of life on Hilton Head.

They’ve been working with the Town of Hilton Head and others to update traffic signs, kiosks, websites and brochures about bicycling on the island. The island has about 50 bicycling “gadflies” to thank for encouraging the town to add pedestrian-crossing signals, putting in more crosswalks and adding safety islands in the middle of busy roads.

“The group began meeting informally at the chamber to coordinate the application effort in 2010, as well as discuss issues around bicycling safety, infrastructure and promotion of bicycling in our region,” said Susan Thomas, co-chair of the BAC and senior vice president of the Visitor and Convention Bureau.

Thomas is a biker herself. “I consider myself to be a weekend warrior rec rider, but I have aspirations to become more active in longer group rides if or when my work life slows down just a bit.”

The BAC’s goals for 2014 fill a seven-page spreadsheet, from making biking more visible to the community to staging more safety classes to setting a baseline for bicycle use.

Because of the biking group, the town is investigating a bike share program as found in many major cities.

Part of its work is to ensure a successful renewal next year of the Bike-Friendly Community designation, said Marcy Benson, the town’s senior grant administrator.

Hilton Head’s designation is unlikely to rise above silver because a gold designation has significant benchmarks related to how many employees ride to work, said Charles Sampson, a member of the Bicycle Advisory Group.

“More people are biking,” said Frank Babel, co-chair of the committee, adding that the BAC trained 40 ambassadors to help people get where they want to go via bike and illustrate the appeal of bicycling on Hilton Head.

Babel uses the RBC Heritage golf tournament as an example of biking’s growth. The tournament let bikes in for the first time three years ago and 500 bicyclists entered Sea Pines. The next year, 2,800 arrived, and this year, 3,800 bikes were pedaled in, despite the rainy weather.

The town, with the help of the BAC, intends to make all community events — including the Concours d ’Elegance this fall — bikefriendly by carting in portable bike racks by the trailer load.

Today, there are 30 bike rental businesses on the island, for a combined fleet of 20,000 bicycles. Add the roughly 5,000 to 10,000 bikes people bring with them strapped to their vehicles and those owned by residents and that’s a lot of bikes, Babel said.

But the committee still has a lot of work to do.

“For active cyclists, our infrastructure is weak. The people in Spandex want to go fast,” Babel said. “They do it for the exercise.”

The BAC will boost its awareness efforts for motorists to make biking on roadways safer.

“The emphasis has been recreational bicyclists. They are our bread and butter,” Babel said.

Two other groups of bikers need attention, too: Commuters and off-road.

At present, most commuters are service workers who get to work via the pathways. To encourage other commuters, the committee helped set up lots where people can park their cars at Jarvis Creek and Coastal Discovery Museum at Honey Horn and jump on their bikes to travel to the rest of the island.

As biking gets more popular, who knows where it will lead.

“I would love to show real estate on bikes, but it gets a little hot,” said Sampson, who is the owner of Charles Sampson Real Estate Group. “Biking is something that when I meet brand new prospects, the package I give them isn’t just about the real estate, it’s the lifestyle: arts, the symphony, outdoor activities, fishing, kayaking, golfing, walking and biking.

“It’s just another arrow in the quill to say the lifestyle is pretty cool. A lot of people ride in Colorado, but there are mountains out there. It’s pretty flat and easy to ride here.”

And getting safer every day.