Makenna Mason grew up on the volleyball court — or nearby — hanging around while her mom coached the middle school team at St. Francis Catholic School. She eagerly awaited her ascension to fifth grade, when she could join the team.

But she didn’t grow up — physically — for a few more years, so the shortest player on the team latched onto the libero role reserved for a defensive specialist who can substitute freely on the back row.

Then came a growth spurt, giving Mason the opportunity to thrive in a new and vitally important role as a setter. It’s a job that demands crisp communication, quick instincts, and consistency on every point, and the soon-to-be star was more than ready to take it on.

“It’s very frustrating to start a new position, and there’s also so much pressure on the setter,” Mason said. “You have to get the perfect set for the hitter.” 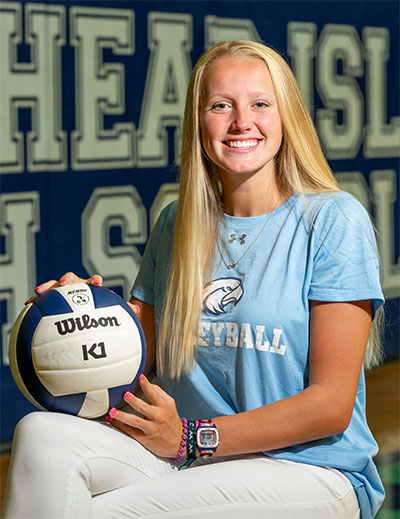 Now heading into her senior season at Hilton Head Island High School, Mason has come about as close to perfecting the role as possible. She already has a state title on her resume, and the reigning SCHSL Class 4A state volleyball player of the year (she had 840 assists in leading the team to the Lower State final) is ready to take on a new challenge — leading a new group of Seahawks back to the title match.

Not every player is skilled, knowledgeable, or confident enough to excel at the setter role, but Mason quickly showed she could handle it all. She absorbed all she could from veteran players like Brooke Simons and state-champion coach Garrett Talarczyk.

Like a master chess player, Mason always seems to be one move ahead of her opponent on the other side of the net, putting the ball in the optimal spot for her teammates to make the play. Her upbeat personality and excellent communication skills make her a paramount fixture in the lineup, and her unmatched work ethic on the court emulates the always-grinding mantra of her coach, who pushed her to elevate to the next level, both physically and mentally.

“Coach T’s favorite thing is the mental side of the game,” Mason said. “He tells us, ‘You’ve gotta have a strong mindset.’ He also cares so much about us being a family and a team.”

After a terrific freshman season at Hilton Head High, Mason set her sights higher. It helped having an elite attacker (Ady O’ Grady ) with the skill to put a ball away from anywhere.

Mason’s and O’Grady’s connection on the court was a thing of beauty in 2020 and propelled the Seahawks to their first state championship since 2016.

The rest has gone by in a flash. Suddenly, Mason is the star of a new group of Seahawks and she’s being counted on to lead them back to the top. Talarczyk’s squad lost seven seniors from last year’s team, giving an extra complextion to Mason’s job description.

“I never thought I’d see the day when I would be the oldest,” Mason said. “Hopefully we grow a lot this year. We’ve got a good group of girls. It’s more of a defensive team, but I’m excited.”