If you’ve been to a sporting event in Beaufort County in the past two decades, there’s a good chance you’ve seen Mark Rennix. If you’re the type who must let officials know every time they missed a call — or made a borderline call one way or the other — you’ve probably yelled at him.

No matter: while the county and the country are mired in a dire shortage of willing officials, Rennix, 63, presses on.

You might find him behind the plate chatting up catchers in the youth rec league or the burgeoning Beaufort County Adult Baseball League one night, calling a rec soccer game the next, and on the ladder officiating volleyball the next.

On Friday nights in the fall, you can guarantee he will be striped in black and white under the lights somewhere. Basketball season used to be the one time you knew where Rennix would be on a given night, but last year he gave wrestling a shot after hearing of a pressing need for referees to allow local teams to compete. 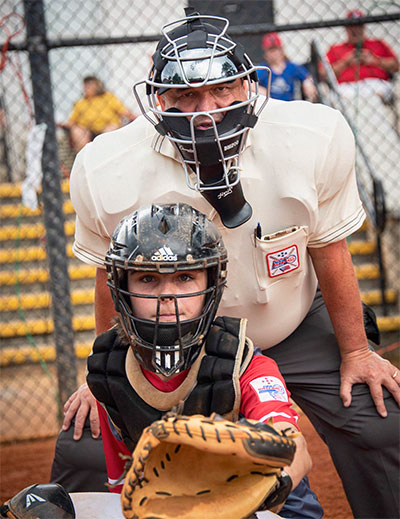 “It was a lot harder than I thought,” Rennix said, noting how often the balance of the match hinges on a borderline call from the lone official — not to mention the physical nature of the gig. “My knees would hurt after every night because I was getting up and down, up and down off my knees.”

Sports have ruled his life since a young age. Growing up in Lower Merion, Pa., — the hometown of late NBA legend Kobe Bryant, he’s quick to point out — Rennix played every sport but excelled in soccer and track in high school. He earned an opportunity to play soccer at NCAA Division III Virginia Wesleyan.

After college he took a job in Virginia Beach with the landscaping company TruGreen, and transfers led him to Little Rock and Fayetteville, N.C., before an opening became available in Bluffton.

“We had family here and already came down every summer to visit and play golf,” Rennix recalls. “It was a no-brainer.”

The family quickly put down roots, and Rennix, who had started coaching his son in Dixie Youth Baseball in North Carolina, was drawn to the local sports scene. Dissatisfied with what he saw, he decided to become part of the solution.

“When I started going to his games, especially basketball, what I saw was … it wasn’t very good officiating,” Rennix says with a laugh.

He went through the training to become an official for the county recreation department and soon ventured into calling local private school basketball games, as well as high school and college soccer matches. He eventually branched out to football, volleyball, and most recently, wrestling. He also serves as the coordinator of officials for the county, handling the administrative tasks of hiring, scheduling, and managing officials across numerous sports.

It’s a tall task, but one he relishes.

Rennix hopes to see more athletes in the area take up officiating when their playing careers end so future generations can continue to play.

Rennix has come to truly value his time in stripes.

“I love working with kids and having fun on the court, the soccer field, or the baseball field,” he said. “I especially love being behind the plate when I’ve got a catcher there and we can sit there and talk about the game and have fun. That’s just different, and it’s the best.”