Around here there are some things you can set your clock by each spring — the azaleas blooming right on time, the weather being perfect for sundresses on Saturday at the RBC Heritage and Hilton Head Prep scooping up state titles on the tennis courts.

It came without much fanfare, but the Dolphins claimed their seventh consecutive state championship in boys tennis in May, rolling past Porter-Gaud in the SCISA Class AAA finals to cap off another dominant season for a Hilton Head Prep program that is simply on a different level due to its proximity and relationship with multiple world-class tennis academies on the island.

Later in the month Hilton Head Christian Academy’s girls soccer team ran it back, repeating as SCISA Class 2A champs with an impressive 3-1 win over Christian Academy of Myrtle Beach to cap off a thrilling high school sports season that saw teams around the Lowcountry claim region and state titles while their stars put up historic stats.

While the majority of SCISA tennis programs are scraping to find six players to fill out a full lineup, Hilton Head Prep had the luxury of rolling out a different slate every day of the week and still dominating the competition.

The Dolphins’ roster boasted 18 players, many of whom will play at the next level, and they employed all of them at some time or another, matching the lineup to the day’s opponent to create competitive matchups that challenged both teams.

They didn’t just beat up on fellow private schools, either, knocking off Class 4A foes Hilton Head High and Beaufort High, which reached the state semifinals in the second-largest classification in the state.

HHCA’s girls soccer program has not yet enjoyed the same kind of dynastic reign as the Dolphins’ recent run on the court, but the Eagles might be on their way — and when you factor in the fact that a number of the team’s standouts also star for the four-time defending champion basketball team, well, it’s kind of a thing.

Despite enduring its second coaching change in as many years — co-head coach Laurie White took the reins in 2022 after working alongside Rosa Smith a year ago — HHCA girls soccer marched to a 17-3 record this spring, with all three losses coming against SCISA Class 3A opponents. Two of those three losses came in the final two games of the regular season, when the Eagles were shut out by Hilton Head Prep and Pinewood Prep while leading scorer Abby Peduzzi was away from the team following her grandfather’s death.

When Peduzzi returned for the playoffs, the Eagles outscored their three postseason opponents 18-2 — and they lose only three seniors.

“I knew these girls had the heart and certainly had the team chemistry to run it back this year,” White said. “Watching them grow together and build up the confidence in their underclassmen was a big strength for our team.”

Not every feel-good story has the ultimate happy ending, but falling short of a state championship does not constitute failure, and a number of teams across the area gave us thrilling runs that nearly resulted in glory.

Hilton Head Prep’s golf team dominated all season long, showcasing its depth by splitting the lineup and still winning meets against solid competition, but the Dolphins came up three strokes short of another state title in a rain-shortened SCISA Class 3A meet, falling to Trinity Collegiate.

John Paul II’s boys soccer team made its first appearance in the SCISA Class 2A finals, as former Bluffton High School coach Josh Fox led a veteran Golden Warriors squad to the brink of a title before falling 3-2 to powerhouse Oakbrook Prep.

HHCA and Heritage Academy tennis finished as state runners-up in SCISA 2A and SCISA 1A, and Hilton Head High’s girls soccer and boys and girls lacrosse programs had stellar seasons with solid postseason showings along with Hilton Head Prep’s baseball team.

The SCHSL state track and field championships were underway as we reached our deadline.

For a list of top achievements, including standout performances from May River’s Fareed Abdullah and Macey Dowe and Hilton Head’s Franklin Holland, visit sc.milesplit.com.

Here’s a look at some of the area’s top high school sports stars of the spring. 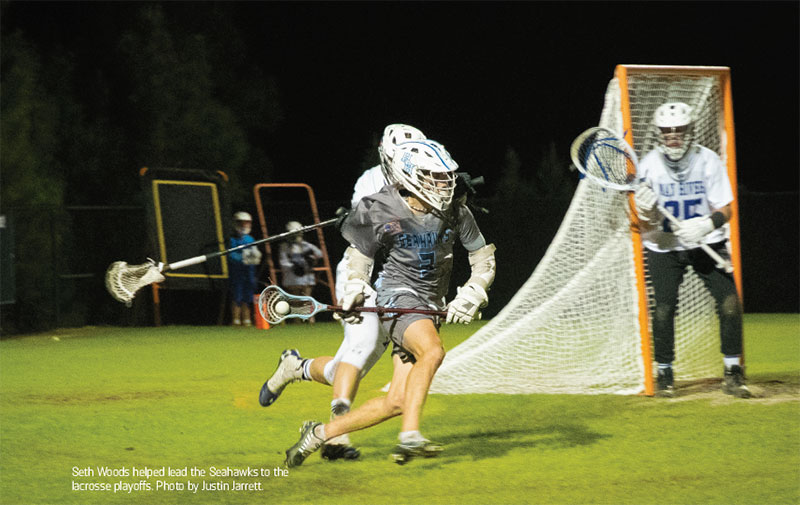 Reagan Marchant, HHIHS softball: When Marchant joined the Seahawks, she immediately lent legitimacy to a struggling program, which has used the momentum to build a solid supporting cast around the future South Carolina Gamecock. Marchant was the centerpiece. She played shortstop and loomed large in the heart of the order, batting .625 with a .709 on-base percentage and 19 extra-base hits in 64 at-bats. Those included 11 home runs and she drove in 40 runs. Mercy.

Abby Peduzzi and Bless Hurtado, HHCA girls soccer: Sure, Peduzzi scored 40 goals (not a typo) this season, but she was the first to say that her junior classmate Hurtado was a big reason why. Indeed, the duo hooked up twice in the state championship game for two more of Hurtado’s incredible 26 assists along with 17 goals.

Brooks Van Esselstyn, MRHS boys lacrosse: We got a little taste of what Van Esselstyn was capable of as a freshman in 2020, when he scored 17 goals in six games in a shortened season, and he put up 40 points across nine games as a sophomore. The Sharks star took it to another level as a junior in 2022, scoring 67 goals and racking up 42 assists in 17 games for an average of 6.4 points per contest. Senior year should be fun.