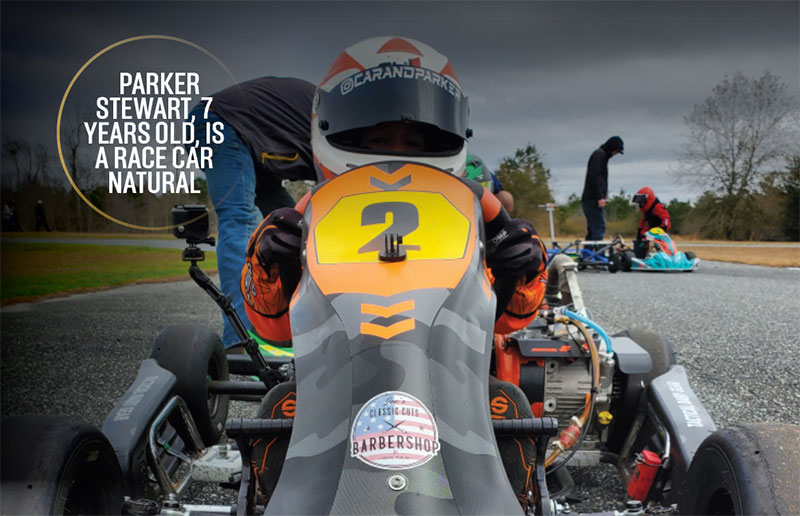 It was almost a given that Parker Stewart eventually would climb behind the wheel of a race car. It was in his blood.

But even his dad — a professional driver himself and the son of a race car driver — didn’t expect it to be at age 3.

That’s when Bluffton residents Doug and Amanda Stewart bought an entry-level kid kart for their daughter, Libby, who had just turned 5, the minimum age to be eligible to compete on the junior kart circuit. Libby didn’t have much interest, but her parents could hardly keep her little brother out of it.

“Parker was 3, and he kept asking if he could drive it, because that’s all he wanted to do,” recalls Doug, who initially decided the 40-mph top speed was a bit much for a 3-year-old. “He begged and begged and begged for a couple of months.”

Parker wore him down, and Doug’s eagerness to see what his son could do got the best of him, but putting Parker behind the wheel safely required some modifications.

“We put some pedal extensions on it because he was way too small to reach the pedals,” Doug says. “I had to stack foam behind his back so it would push him forward in the seat far enough. And I put a remote control shut-off on the engine in case he took off and looked like he was going to kill himself. I could completely shut the motor down.” 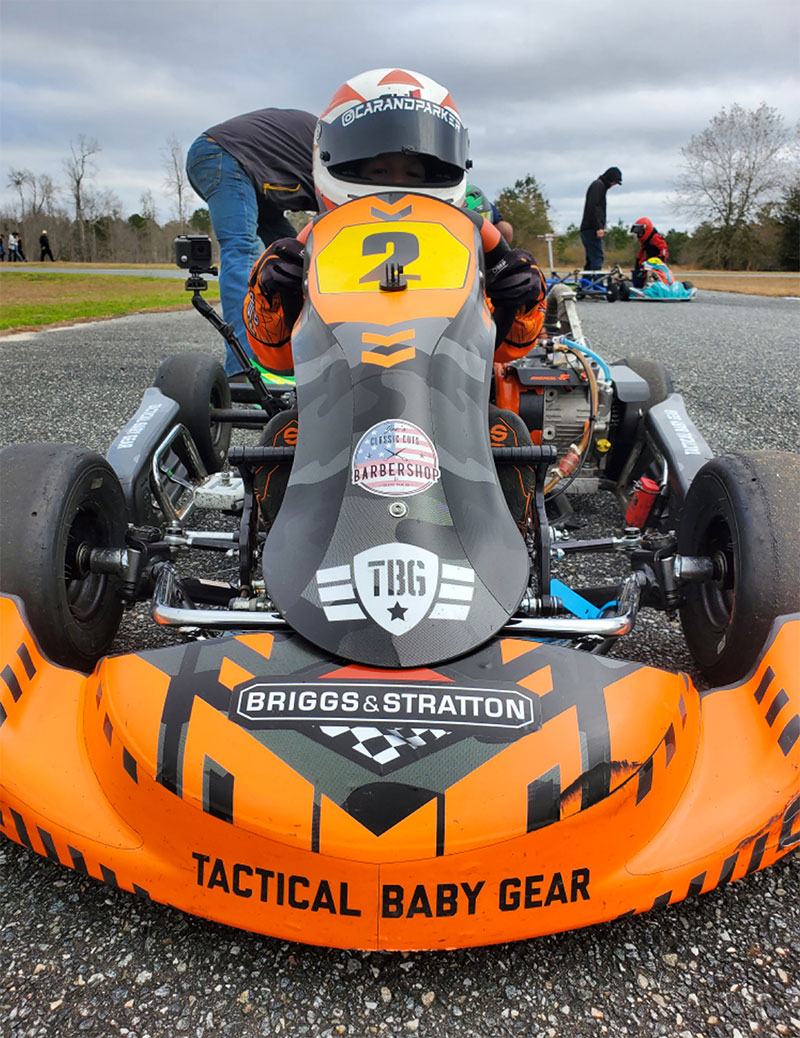 “He took off out of the driveway full throttle and never looked back,” Doug beams. “It was like he was a natural.”

It has been about four years since Parker Stewart first bolted out of the driveway on four wheels, and almost three years since he started competing — and mostly winning — a year before he was eligible, which proved as simple as saying he was 5 at registration.

Parker got that first taste of competition at age 4, when he won every race he entered in a series in Jacksonville, beating kids up to four years his senior and cluing Doug into the fact that he had a special talent on his hands. Later that year the family attended Kart Week in Daytona Beach and met Nitro Kart founder Nick Tucker, leading to Parker becoming a Nitro Kart factory driver.

And, boy, does he put his kart’s best foot forward.

Through mid-February, Parker hadn’t lost a race in 2022, and that includes three national-level events. If he wins again March 3 at Charlotte Motor Speedway, he could lock up the Cup Karts North America South Division title — with nearly 10 months left in the year.

Parker is a tiny ball of energy like many 7-year-old boys. He usually sports a mohawk and a mischievous grin, and he’s funny and gregarious. His racing hasn’t prevented him from a traditional childhood thus far — he plays football for the Bluffton Bulldogs and attends public school — but that is likely to change soon. 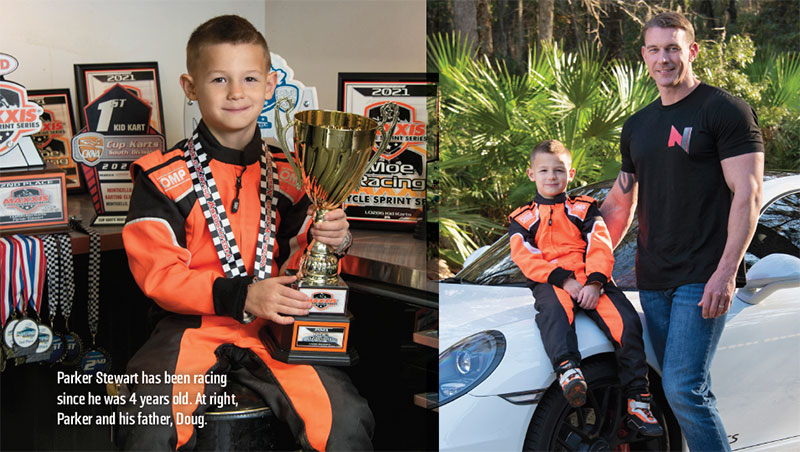 After dominating the regional competition, Parker needs to challenge himself with more national races and seek out better competition around the country. He has mostly raced on the East Coast until now — from Ohio to South Florida — but this year’s 30-race schedule could include a trip to Las Vegas. Home-schooling is imminent.

Only eight of this year’s races are in kid karts, while the rest are split between cadet and Micro Swift events, the next logical progression on a timeline that sees Parker getting seat time in a proper F4 car when he’s 13. This will give him a year to adjust before he can compete and continue on the path toward his dream of becoming an F1 driver.

“I just like when I’m on wheels going fast,” Parker says. “When I don’t spin out and never even finish the race. It’s happened before!”

As a professional F2000 driver who didn’t turn pro until his 30s, Doug is amazed at Parker’s natural ability and racing instincts at such a young age.

“I’ve been coaching adults for about 11 years now, and I see things in him and I can get him to understand things and do things that I can’t get adults to do,” Doug says. “There’s some things in racing that can’t be taught — they’re innate. And he has that.”

On the first weekend of February in Monticello, Florida, Parker was locked in a duel with rival racer but off-track best bud, Cooper Mull. Both were driving Nitro Karts with identical specs, but Cooper’s was running hotter — about 1mph faster at top speed — so every time Parker created a gap, Cooper chewed it up in the straight.

“You’d think that there’s no way to possibly pass, and there wasn’t,” Doug says. “But Parker found a way. He put his two inside wheels in the dirt, two wheels on the curb and made a pass and won the race. You can’t really teach that, and you wouldn’t teach that. I’m never going to tell one of my students to put their wheels in the grass. But you know, you either go by the rules and settle for second place or make things happen, and he just makes things happen.”