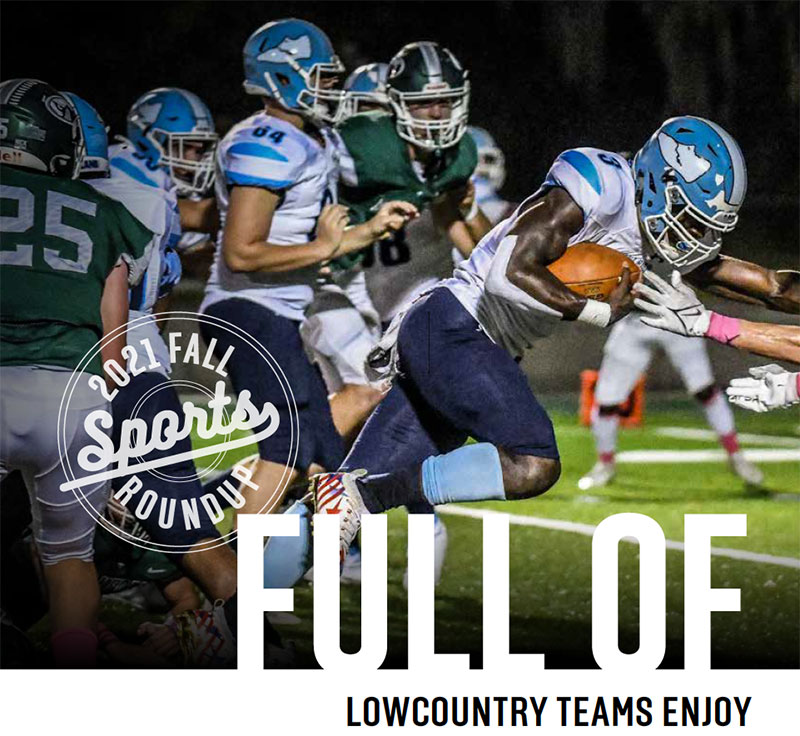 A Lowcountry star was crowned South Carolina’s Mr. Football for the first time, and a local squad capped off a second straight perfect season with a state title this fall — and that was just on the gridiron.

It was a terrific fall sports season in the Lowcountry, with the girls golf teams at May River and Hilton Head Prep joining Hilton Head Christian Academy’s football squad as repeat state champs and numerous student-athletes racking up individual honors.

He’s the first in the Lowcountry to ever achieve the distinction. 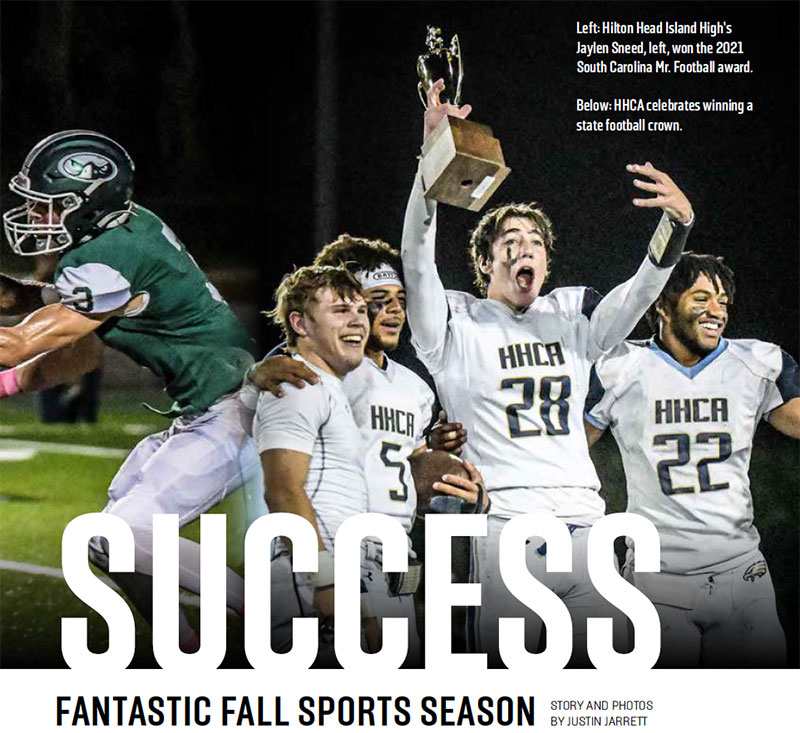 “He’s unselfish on the field, in the classroom, and in the community,” HHIHS head coach BJ Payne said. “He does all the right things. On top of being an awesome human being, he’s a great football player.”

Sneed was also named as a finalist for the High School Butkus Award and a semifinalist for the Maxwell Club National High School Defensive Player of the Year Award. He has also exceled in the classroom and in the community, carrying a 3.6 grade point average while taking time to volunteer at his church and across the Lowcountry. He committed to the University of Notre Dame in July.

HHCA captured a state crown for the second straight year, remaining undefeated since falling in the SCISA 2A title game in 2019.

The girls golf teams at May River and Hilton Head Prep had little trouble defending their state titles, as the Sharks cruised to a 44-shot win in the Class 4A state meet at Crescent Pointe Golf Club and the Dolphins won their third straight SCISA 3A title by 108 shots. 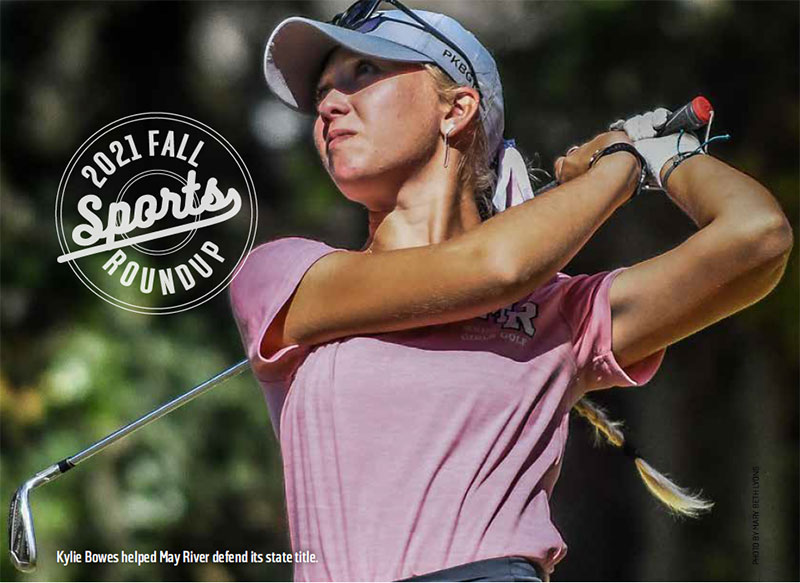 May River’s Kylie Bowes tied for second with a 36-hole score of 5-over-par at Crescent Pointe, while Hilton Head High surged to a runner-up finish behind the Sharks with Seahawks standout Alexia Milbrandt finishing fourth to join Bowes and May River teammates Robbin Zetrouer and Claire Green on the All-State team.

Hilton Head Prep broke 300 on both days of the SCISA state meet and ran away with a third consecutive state championship. All five Dolphins finished in the top 15, with sophomore Bridget Wilkie leading the way and winning the individual title by four shots. Wilkie made only four bogeys in 36 holes — and nothing worse — and countered them with six birdies in a stellar performance. 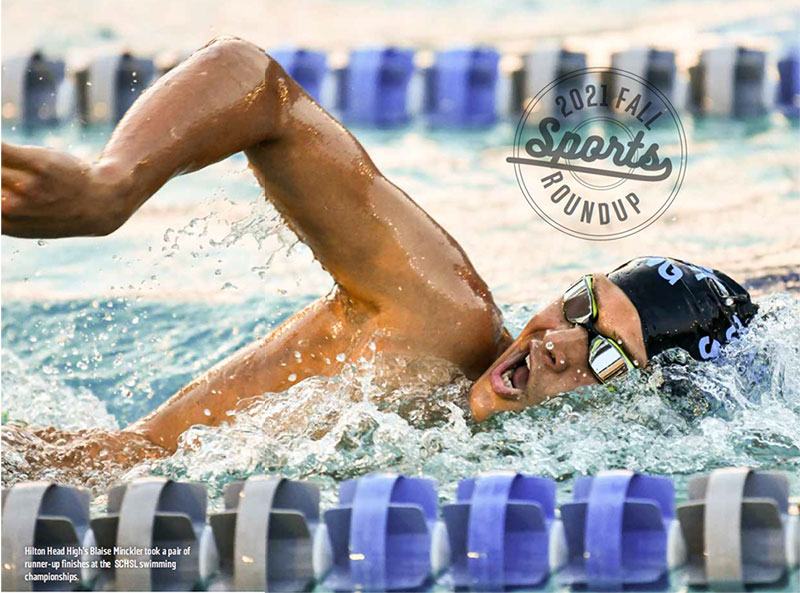 Ussery won the 100 breaststroke and the 200 freestyle — the latter by 27 seconds — and joined Eidson, JP Reed, and Wells Sharpe on the runner-up 400 free relay and third-place 200 free relay to lead the HHCA boys to a strong third-place showing in the Class 2A/1A standings.

Eidson also placed second in the 200 individual medley, and Sharpe finished second in the 100 fly and the 100 back, finishing just two seconds off the pace in the latter race.

At the Class 4A boys meet, Hilton Head High’s Blaise Minckler captured a pair of runner-up finishes to lead the Seahawks to a fourth-place showing. Minckler was the area’s top representative, finishing second in the 500 free and 100 breaststroke and contributing to a third-place finish in the 400 free relay and a fourth-place showing in the 200 free relay. Jackson Voelkel, Christian Naddy, and Dylan Magda joined Minkler on both All-State relays, and Magda claimed fourth in the 200 IM.

In the Class 4A girls meet, May River’s Shelby Gourley captured a state title in the 100-yard breaststroke, and Hilton Head High and May River claimed top-four finishes in the team standings. Gourley edged AC Flora’s Hannah Montgomery for the 100 breaststroke title, finishing in 1:05.75.

QUEENS OF THE COURTS

Emily Ruckno’s quest for a state singles championship came up just short for the second straight season. The Hilton Head Island High School junior fell to Socastee’s Brooke Rodgers in the championship match at the Florence Tennis Center to earn a runner-up finish and the Coach’s Sportsmanship Award.

The Seahawks volleyball team also came up short in its drive for a second straight state title, but Makenna Mason was named the Class 4A Player of the Year and was joined on the Class 4A All-State team by teammate Ady O’Grady.

CLOSE TO A CROSS COUNTRY CROWN

On the cross-country course, Anya Arroyo earned state runner-up honors for the second year in a row, powering May River’s girls to a third-place finish at the SCHSL 4A Cross Country Championships at the Sandhills Research Center in Columbia. Bluffton’s girls placed in fourth place, and Hilton Head High led the boys’ contingent in seventh.

The Lowcountry also produced a runner-up finish in the SCISA meet, where Gabbriella Jimenez (22:31.12) led Heritage Academy to a second-place showing in SCISA 1A, taking second individually and first among all scoring runners.