In retrospect, the post on GOAL Indoor Soccer’s Facebook page from Jan. 13, 2020, seems almost ominous. Photos of construction taking place on the massive facility off S.C. 170 are accompanied by a message that seems doomed in hindsight.

“Moving fast!!! Are you ready for March?”

None of us were ready for what would come two months later, when the world shut down as the COVID-19 pandemic took hold across the globe. Organized sports came to a standstill. We were advised to avoid crowded indoor spaces. Not exactly the prime environment to open an indoor soccer training facility.

But Mauricio Llambias marched on, and GOAL opened its doors in July 2020, giving players of all ages around the Lowcountry a place to train year-round, even on rainy days. Now, Llambias has a bigger vision for providing opportunities for future soccer stars in the area, launching the GOAL-Levante UD Academy through a partnership with the La Liga club in Valencia, Spain. 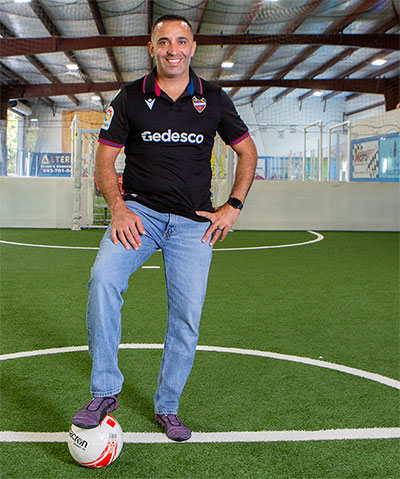 “It was hard at the beginning, very hard, but we kept it open; we survived,” says Llambias, who grew up playing the game in Uruguay before coming to the United States in his early 20s to play professionally. “Just to keep it open was a big thing.”

Llambias himself played at a high level, joining a first division club in Uruguay at age 16 and playing in his home country and Argentina before earning a tryout with the Charleston Battery.

After trying out with the Battery and the Wilmington Hammerheads, he was offered a contract with the Houston Dynamo before a knee injury ended his professional career.

Fortunately for Llambias, former Pearlstine Distributors (Anheuser Busch) had been a Battery sponsor during his time with the club and offered him a job in the Lowcountry. He continued to play amateur soccer and stay connected to the game, always dreaming of finding his way back to a career that incorporated the sport, but never finding the opportunity as he and his wife, Veronica, began building their own family.

“My plan was always there to create something like this,” Llambias says. “I wanted to do it in Uruguay, but another friend did the same thing, and I didn’t want to compete with him. Here it is more expensive, but I put in enough effort, I put 100 percent motivation on it. I had some savings from my playing days, and I put everything together and contacted the right people and made sure we could make it. It was a dream come true.”

The new business venture flourished through private training for players from local clubs, as well as birthday parties, tournaments for youth and adult teams, pickup games (drop-in for two-hour games Wednesday and Fridays), and weekly training for “Little Kickers” ages 5 and up, which includes a variety of drills.

“Youth soccer players focus more on perfecting the skills, so they perform them correctly in game situations,” GOAL’s website notes. 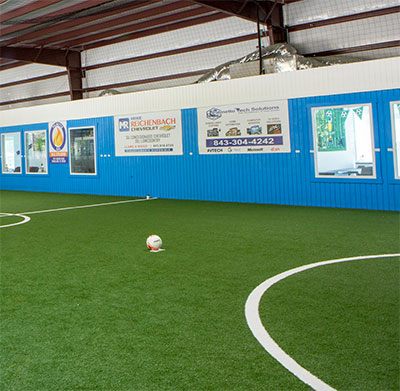 As the number of club players training at GOAL continued to increase, Llambias and the coaching staff at the facility began to wonder if they could form their own club.

“We’re always trying to do the best for the kids and for soccer,” Llambias said. “I started wondering what the best way was to give the kids more opportunities.”

Through some of his long-standing contacts in the soccer world, Llambias was put in touch with Levante Union Deportiva and the two parties struck up a partnership that will allow GOAL’s new academy players opportunities to learn from their big brother club in Spain.

Four players from the club’s 2007 boys team traveled to Valencia in September to train with Levante UD, and Llambias received a good report and says the big club has taken a particular interest in one player’s development.

Levante’s international training director plans to visit the Lowcountry in December to meet with the new academy’s players, parents and coaches and begin incorporating Levante’s training program at GOAL.