The Dublin native and recent Bluffton transplant had a dream of introducing his lifelong passion, Gaelic football, to the local community.

That dream was loaded with a couple of gigantic challenges. First, few people in the U.S., let alone the Lowcountry, know about the mashup of soccer, rugby and American football with a pinch of basketball.

That’s no problem for the 54-year-old former semipro player and coach who loves talking up the game. His biggest obstacle proved to be his own expectations.

“I don’t do things slow, I don’t have patience,” Archbold said. “My wife, Kristin, helped with the patience. We did a lot of research, got help from folks who had started a league in Savannah and we just started recruiting and talking up the game.”

The couple started with a meet and greet at Bluffton Trading Post just before Memorial Day 2020. Archbold’s passion attracted many curious ex-athletes to the early practices. Soon the word spread that this gnarly band of booters was having the most fun intown.

Just over a year later, the club had 18 players, elected a board of directors, and played their first-ever game against the Savannah crew. 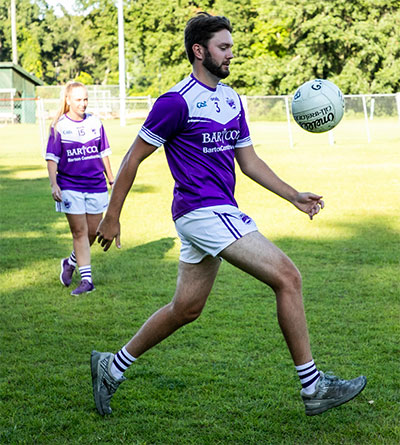 “The practices, I’ve never been so tired doing anything. The game was just as tiring, but it’s addicting,” said former pro rugby player and Bluffton Gaelic Club vice chairman Sean Ritter. “It works every muscle, scratches that athlete itch in ways many of us never experienced. Plus, it’s such a fun group of people.”

Archbold was looking for “anyone with a pulse” to start his search. While he may be a bit more discerning a year later in finding talent, the club founder said there’s room for everyone as the squad begins fall practices.

Think you want to give Gaelic football a try? Here’s the basics of what you’ll need to know before hitting the pitch.

THE TEAM: Traditional Gaelic football is played with 15 players, but the U.S. version is 13-a-side with positions and formations like soccer.

“We have half forwards and half backs, that’s the additional spots. But there’s midfielders and goalies just like soccer,” Archbold said.

THE FIELD: Traditional Gaelic fields are about 130 yards long, but most U.S. games are played on 100-yard football fields. Both ends have a goal and a crossbar above the goal.

THE BALL: A sphere that looks like a slightly large volleyball.

ADVANCING THE BALL: You can carry the ball, but can’t run with it more than four steps. At that point, you either bounce the ball, pass it, kick it or ‘solo’ it.

“You drop the ball to your toe and kick it right back into your hands,” Archbold said. “It might look like Riverdance but the top players make it look like second nature.”

PASSING: Players either kick the ball to another teammate or strike the ball with the side of a closed fist, using the knuckle of the thumb.

Kick it or fist it over the crossbar, it’s one point. Want to score in the goal? You can kick it in, or you can fist punch right after receiving a pass or picking the ball up off the ground.

“My Bluffton crew, they definitely got confused by all that,” Archbold said. “The final score is even trickier.”

SCORING AND GAME LENGTH: Game score is kept by showing the goals first and then the points. For example, a team that has zero goals and 21 points (0-21) beats a team that scores four goals and eight points (4-8).

FOULS AND TACKLING: Similar to soccer, a player can be cautioned or removed from the game. There are three types of fouls – technical fouls (rules violations), aggressive fouls (overly aggressive play or verbal abuse of opponent or referee) and dissent fouls (not complying with referee judgment or instructions).

Tackling is allowed far less than rugby or American football. Shoulder-to-shoulder contact and slapping the ball out of an opponents’ hands are permitted, but just about any other contact will be called as fouls.

There are no offsides and no corners kicks. Out of bounds balls are inbounded by a kick out of your hands.

It’s a lot to figure out, but don’t worry. Archbold, Ritter and the team are all about teaching up the newbies. Most of them were noobs just a few months ago.

Archbold hopes this introduction of the sport to the area is just the beginning.

“I want to get this in all the high schools, have youth teams and adult teams in every town, a countywide league,” Archbold said. “One day, I’d love to win a U.S. title with this bunch.”

But he’s ready to do the crawling before the full-out sprint.

“We want to get regular games going, get this crew ready for a rematch with Savannah,” he said. “It’s moving along well. I’m just happy to see folks excited about giving it a try. Once I get you on the field, I got you hooked.”

For more information on the team, visit blufftongfc.com.