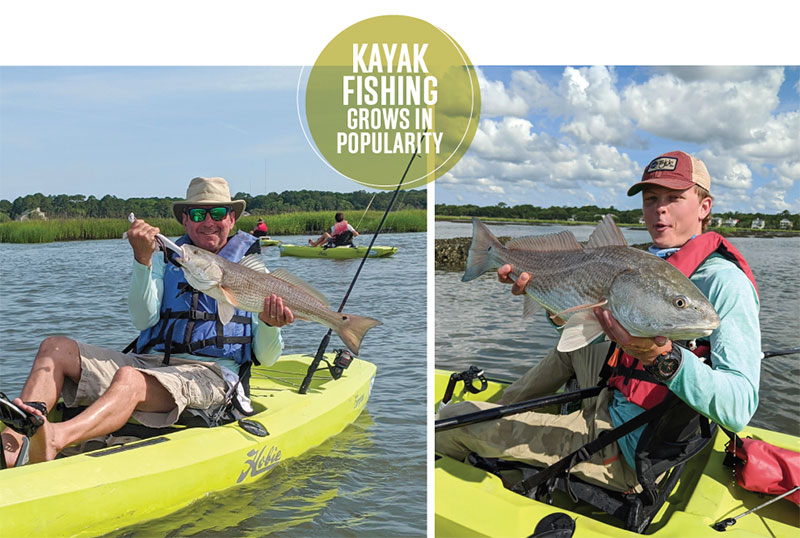 The Lowcountry has always been a paradise for fishermen and shrimpers, many of whom have made their living on their skill on the water, thanks to the pairing of the tidal marshes and creeks with ample opportunity for deep-sea and freshwater fishing.

And the kayak has long been an excellent mode of transportation in and around the calm waters of Broad Creek and other estuaries separating our sea islands.

Numerous charter companies lead fishing tours via kayak. If you’re over age 16, you’ll need to obtain a South Carolina Saltwater Fishing License prior to your trip through the S.C. Department of Natural Resources — a 14-day pass is $5 for residents or $11 for non-residents or you can snag an annual or three-year pass — and brush up on your casting skills, and you’ll be ready to rock.

Well, maybe don’t rock in a kayak, but you should be set for a positive experience, especially if you have a guide like Outside Hilton Head’s Wesley Hodges.

Hodges started as an intern at Outside in 2017 and has been a full-time guide since 2018. He knows his way around the local waters and has plenty of tips for first-timers and experienced anglers alike.

While the Hobie Mirage Pedal Drive kayaks (which are hands-free and specifically designed for fishing) used at Outside Hilton Head are intuitive and easy for most users of all ages to operate, fishing out of them can be another story for a novice angler.

For absolute newcomers, a traditional charter might be a better fit. On a charter boat, the captain can do as much as needed to help an inexperienced angler find success, but in a single kayak, you’re on your own.

“Kayak fishing can be challenging if you don’t have experience fishing,” Hodges says. 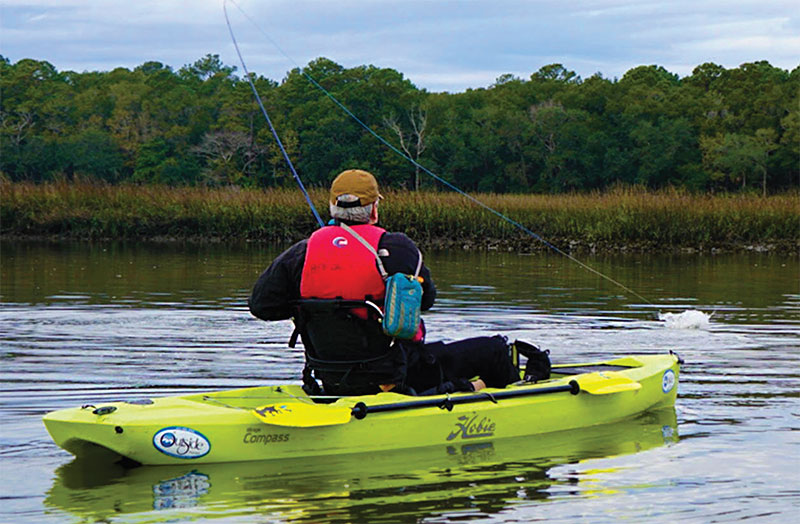 With that said, experienced anglers may find that being closer to the water and being able to work their way into remote honey holes provides a new thrill.

“My favorite thing about fishing from a kayak is access,” Hodges says. “You can get into a lot of areas that you can’t with most boats, and you can get there a lot quicker.”

There’s no fuel or major maintenance involved, and kayaks are much easier to transport than boats. Plus, the accessibility is a major boon when fishing the tidal waters around Hilton Head Island, where the prime fishing involves accessing shallow areas known as “flats” to sight-fish for red snapper, trout, and the occasional flounder.

“Fishing out of a kayak is a huge advantage as far as the types of water you can get into,” Hodges says.

But it does come with a bit of a learning curve, so it’s important that prospective anglers have some experience casting before trying to do so from a kayak. Reaching the areas where the fish will bite still requires some skill with the rod and the ability to cast a reasonable distance.

When you are ready to go out on your own without a guide, a newcomer to kayak fishing has a few tips. Bluffton resident Renato Bruto da Costa is a longtime angler who recently bought a kayak and began paddling and fishing in the May River and around Pinckney Island.

His advice for newbies is to plan ahead, pack lightly, and organize smartly. Only bring the optimal equipment for the species you’re targeting, have important tools like pliers in a handy spot, and pack a small anchor to keep the kayak from drifting when you find a good spot.

More than anything, have fun and enjoy the time on the water.

“I love it,” Bruto da Costa says. “It’s so much better than shore fishing.”