Trying to build the next generation of Hilton Head Island’s rowing community was enough of a challenge before the concept of social distancing became a ubiquitous phrase in the vernacular.

But Dave Erdman and Chuck Yocum have kept paddling.

HHI Crew has been a mainstay since 1995 — save for a brief hiatus in the mid-2000s — but the COVID-19 pandemic presented a new challenge, and right when things were really starting to sail. Yocum rejoined the organization in September 2019, and the program flourished, drawing rowers from throughout Beaufort County and across the Savannah River.

Then the pandemic hit.

The roster dwindled in the midst of uncertainty, but Erdman and Yocum charged on. Limited to rowing singles because “fours” and “eights” put rowers in close proximity and the physical exertion required makes wearing masks impractical, the team kept training, even with all the races on their schedule called off.

When they are able to get back in the bigger shells, the individual work should be beneficial.

“Rowing in a single improves your stroke,” says Erdman, who has been involved with the program since the outset. “You have nobody to blame but yourself.” 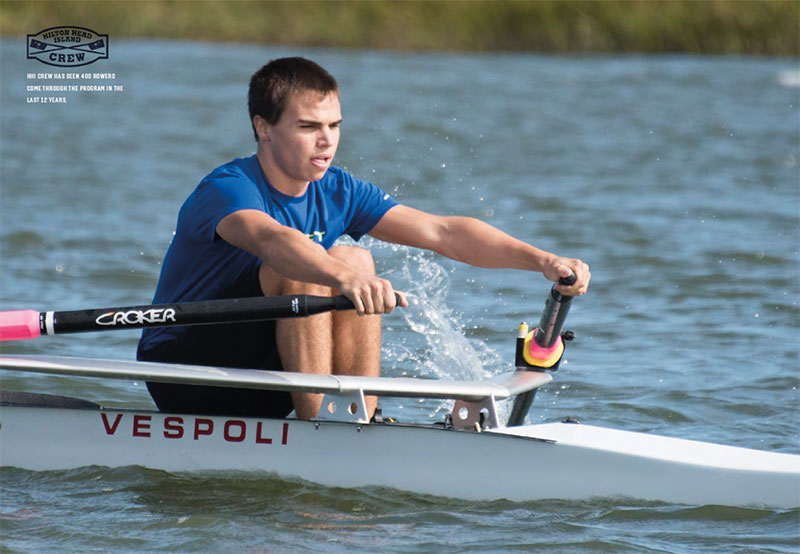 The club started at Hilton Head Island High School in 1995 and enjoyed a solid 10-year run before a change in state funding rules pushed high school club sports to the fringes.

leftover equipment and facilities to use.

Now operating under the umbrella of the not-for-profit Palmetto Rowing Club, HHI Crew showed steady growth and was poised for a big season before the world turned upside-down. Erdman and Yocum had to devise a new plan in a hurry.

The Palmetto Rowing Club agreed to offer its 15 singles shells for use, and 23 devoted young rowers set out from the Old Oyster Factory in two shifts a day to hone their craft.

Although they couldn’t travel to events in hubs like Charlotte, Atlanta, and Jacksonville, Fla., the rowers had a chance to see their hard work put into action with an intrasquad race to cap off the fall season.

“I think we’ve had a very good season considering all the challenges we were facing,” Erdman said.

And they’re not letting up. 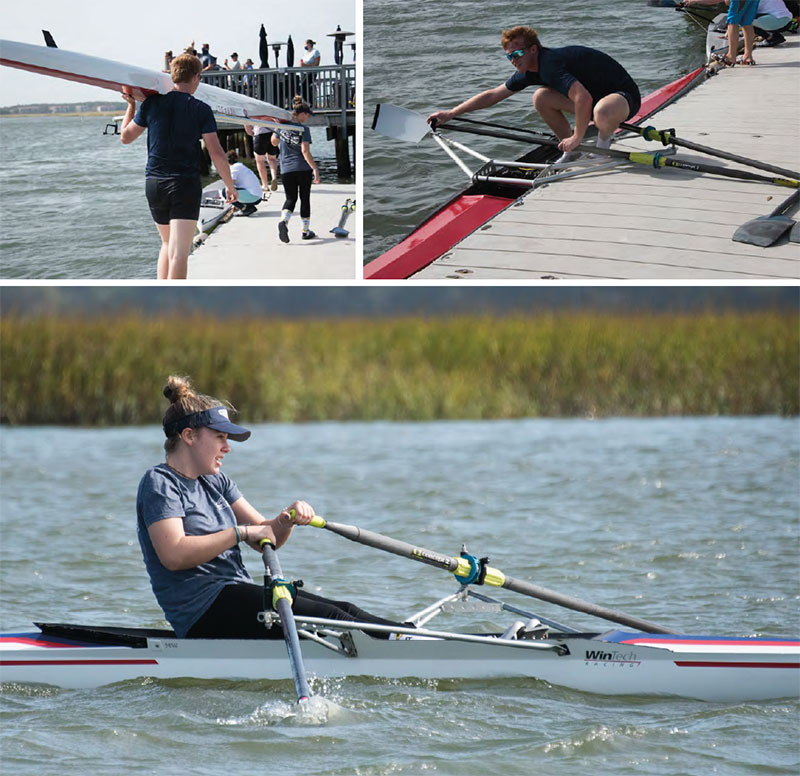 There are no after-school practices until spring, but Yocum is running land-based workouts four days a week to keep the rowers in shape, and the club has planned several learn-to-row events in an effort to introduce more middle school and high school students to try the sport.

Both Erdman and Yocum rowed in high school and college, so they’ve seen first-hand the benefits the sport offers and want to pass those perks on to a new generation.

“Not only success on the race course and what that means to a young person growing up, but also I see how the bond of rowing between the people that are on the team is something that has to be experienced,” Yocum said. “It’s a lifetime bond formed between the participants, and it’s something you can’t manufacture.”

During a season without formal competition, and with a unique set of challenges to overcome, Erdman and Yocum have seen that bond growing even closer among their team, and they’re excited to see what lies ahead.

“The kids learn life, leadership and confidence skills, and that’s going to help them throughout their lives,” Erdman said.

And he would know. He has seen nearly 400 rowers come through the program during the past 12 years, and while seven have earned scholarships to row in college, Erdman is prouder of another statistic — the program’s perfect high school graduation rate.

“I just enjoy working with the kids,” Erdman said. “It’s a cliché, but they do keep me young.”