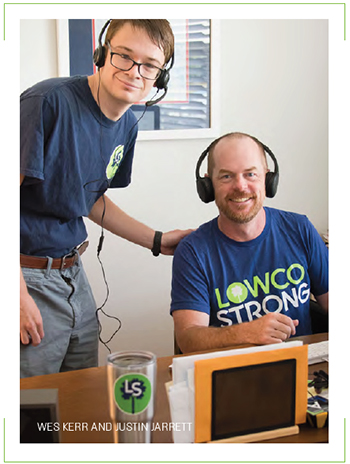 When Justin Jarrett launched Lowcosports.com in 2017, his vision was to promote the athletes and teams of Beaufort and Jasper counties.

The platform has thrived thanks to Jarrett’s insatiable passion for highlighting the stories of the Lowcountry, and an audience hungry for quality local content.

But the website was always just part of Jarrett’s plan to connect the community.

Last year, with the help of Wes Kerr, Jarrett took another step in engaging the audience by launching the LowcoSports Lowdown podcast.

From interviews to high school football previews and recaps, the podcast offers a different medium for student-athletes and coaches to share their thoughts and gives listeners a primer on what’s happening in the local sports scene.

Momentum is growing. The fledgling podcast originally had about 20 to 30 listeners a week, but Jarrett said a year later, with five episodes weekly, the audience has grown to 300 to 400 listeners.

Jarrett said he enjoys giving the kids in the area an outlet.

“I like the idea of amplifying the voices of the student-athletes and young people and put them in situations that will help serve them later, like in job or college interviews,” he said.

The podcast might not have taken off without Kerr, a graduate of Hilton Head High and Davidson College.

Kerr had just started his own podcast when he was introduced to Jarrett. They quickly realized they had similar goals and agreed to unite. They had an initial meeting on a Tuesday. Six days later the first episode was released.

Jarrett said Kerr’s work goes beyond just being the co-host.

“He does so much research and homework before shows,” Jarrett said. “He spends hours on production and he’s just brought so much energy; his energy raises my energy. He's helped take LowcoSports to a new level.”

The coronavirus pandemic threatened to stunt the podcast's growth, but after a spring season without sports, Jarrett realized people were spending more time at home and were looking for ways to be entertained.

The podcast’s audience increased during the pandemic, with Jarrett, Kerr and Carlo Perruzza, a graduate student at Georgia Southern University, able to interview more guests. The start of the high school football season has been a boon for the podcast’s popularity.

“High school football has given us a huge boost,” Jarrett said.

The podcast, which touches on all sports, has included interviews with current standouts, such as May River football star Ahmed Green and Whale Branch girls basketball star Zhani Thompson, and also keeps the Lowcountry updated on athletes who thrive after they leave the area.

A recent guest was Nyles Pinckney, a former Whale Branch football standout who is an integral contributor on the Clemson football team. He was part of the 2018 squad that won the national championship.

“I don’t think we should stop celebrating our kids after they graduate from high school,” Jarrett said. “We like to showcase them after they have gone on to bigger things."

The talk is primarily sports, but Jarrett and Kerr don’t ignore major events happening in the country.

Jarrett invited both onto the podcast.

"We saw kids that we cover out there leading the protests,” Jarrett said. “We talked to them about being athletes, about being Black in America and in Beaufort County and what that entails. That was important; those kids aren’t just athletes.”

Jarrett said the podcast is apolitical, but he believes it is important to recognize meaningful issues.

“I think if it’s relevant, if there’s something that affects them (parents and students), we should highlight that,” he said. “We are not just sticking to sports.”