Over Memorial Day weekend, John Burk felt a lump in his neck that turned out to be malignant. Five months later, Burk found himself thousands of miles away, at Old Trafford stadium in England, home of Manchester United Football Club.

No, the cancer didn’t get him. And he really wasn’t dreaming. As surreal as it felt, Burk’s journey was real. 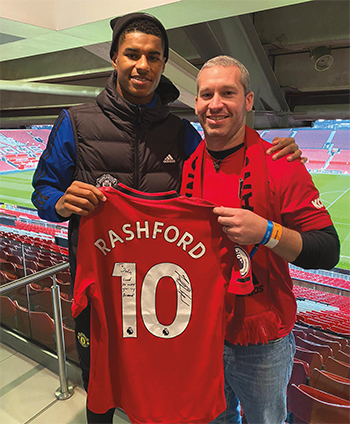 It all started on a Saturday, when Burk noticed the lump on his neck. His wife insisted he have it checked out. Through his and his wife’s connections — both have worked in the medical field — he had the growth examined on Thursday and the node removed the following Tuesday.

How could he have testicular cancer in his neck?

It turns out microscopic cells can be left behind when the testes drop from behind the kidneys as a young man goes through puberty, and some of those cancerous cells made their way all the way up to his neck. The fear was there would be more malignant cells elsewhere in his body, but Burk dodged that bullet. It appeared the cancer was confined to his lymph nodes.

Burk visited the same specialist in Indiana who treated cyclist Lance Armstrong’s testicular cancer, then returned home for a brutal nine-week chemotherapy regimen. When he returned to Indiana in September, everything looked normal.

“It’s still not a done deal, but even if it came back it’s still a 95 percent cure rate,” Burk said. “I never even had time to worry about anything.”

Burk grew up in Atlanta and now lives in Pooler, but his soccer roots have spread to Hilton Head Island. He has played with the Hilton Head Wanderers semi-pro team the past few years, teaming up with former Mars Hill College teammates Dan and Matt Waymont.

After Burk’s cancer scare, the Waymont brothers began raising money to take their friend on a journey to fulfill a lifelong dream — seeing his beloved Reds play at Old Trafford. They were able to fund the trip easily enough, but getting a ticket to see Man U in person proved more difficult.

It was Matt who had the idea to reach out to Rashford via social media, asking the star to help secure a highly-coveted ticket to a game against Brighton on Nov. 10. Matt sent the tweet on Sept. 15. Two days later, Rashford replied.

Other strangers lined up in the replies to donate their tickets, and requests to contribute funds for the trip began flowing in, along with lodging at Hotel Football, a stone’s throw from Old Trafford (thanks to owner and former Man U defender Gary Neville). Invitations to be a guest at top-tier restaurants in Manchester also came in, including one from former United star Rio Ferdinand’s Rosso Restaurant & Bar.

Burk had no idea. He wasn’t on Twitter. So when the story went viral and a friend sent Burk the link from the Daily Mail, he was certain he had been pranked.

“I’m reading it thinking someone went to a lot of trouble to pull this joke on me,” Burk said. “Then I realized, holy crap, this is actually real.”

Burk felt he was in heaven from the time he boarded the plane to England until the Brighton match kicked off. The group — Burk, Dan and Matt Waymont, and their brother Andy — enjoyed hospitality and delicious food and rubbed elbows with some of their favorite footballers. They took a VIP tour of Old Trafford, enjoyed a 3-1 Man U victory from Rashford’s private luxury box, and were featured in a short documentary of the experience posted on Rashford’s website.

It was, to say the least, a dream come true.

“It’s hard to put into words. Just an unbelievable experience,” Burk said. “Beyond lucky, regardless of the circumstances.”