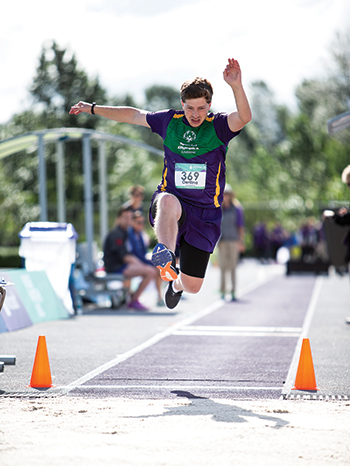 Cramer in particular won special praise for her efforts to encourage special-needs athletes. In April, David Bennett, then mayor of Hilton Head Island, recognized her with one of seven Honored Island Awards. “I thank Kathy Cramer for being a fierce advocate in improving the lives of special education athletes in Beaufort and Jasper counties, giving them a chance to engage in a healthy, active lifestyle,” Bennett said during the ceremony.”

More than 5 million children and adults with intellectual disabilities participate in Special Olympics events around the world each year. Founded in 1968, the organization helps participants to become physically fit and achieve their goals. The free program is open to those ages 6 and older, and Special Olympians compete at regional, state, national and international levels — often paired with an able-bodied athlete as part of a unified team. The Lowcountry’s Area 8 has sent four athletes to the past two Special Olympics World Games, and all four earned medals.”

There are about 480 children and adults in the Lowcountry who compete in Special Olympics events alongside volunteers from area organizations like Beaufort County Public Schools, the Beaufort County Department of Disabilities and Special Needs, and Programs for Exceptional People.”

Twelve local athletes and their partners will compete in the National Adult Unified bowling tournament March 6-7 in Las Vegas. Unified sports are when a Special Olympic athlete is paired with a typical person and they compete together.

Track and Field competition will take place at 10 a.m. April 5 at May River High School in Bluffton. About 300 athletes will compete.