“Junky waves — we love ‘em!” said Sewell, who has compared hydrofoil surfing to ice skating on a wave.

The surfboard Sewell had Matt Talcott use for his first time was actually a paddleboard with a slim inverted T-shaped hydrofoil underneath. A hydrofoil functions like — and even looks a bit like — a little airplane, according to Go Foil owner and designer Alex Aguera, a pro who has visited Hilton Head Island to surf with Sewell. The device is mounted on a rod beneath the surfboard. Many unfamiliar with the sport assume the surfboard is powered by a motor, but it’s not — hydrofoil surfing works using the laws of aerodynamics.

“Have you ever seen dolphins bow riding?” Sewell asked the Talcotts. “Hydrofoil is like that.”

The session started with Matt lying on his board, tow rope in hand as if he were water skiing. He quickly learned to pop up on his feet, standing sideways, and it wasn’t long before his board rose two feet out of the water. Only the inverted “t” was in the water — until it wasn’t, and Matt took a nosedive into the deep water off Pinckney Island.

Sewell jumped into the water and demonstrated an expert ride. With Matt driving the boat, Sewell gently guided the nose of the surfboard to help it rise above the water, and then let go of the rope. By pumping his legs, he rode the boat’s wake a good quarter-mile.

By the end of the 90-minute session, Matt was able to let go of the rope and keep surfing.

“It felt amazing,” he said, on a rest between rides. “You’re flying.” 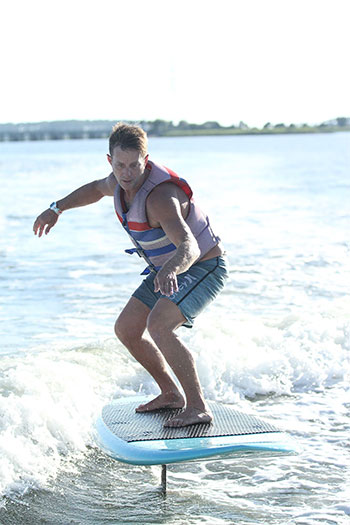 On the way back to the Pinckney Island boat landing, the sun was setting and Sewell told the Talcotts about his decision last year to return to Hilton Head full time and start Native Son Adventures, which also offers crabbing, surfing, fly fishing, charter fishing and other adventure trips.

After years living in Costa Rica and travelling as a guide on surfing, diving and fishing expeditions in New Zealand, Australia and the French Polynesian islands, home called to Sewell. He wanted to be with his family and island friends and to embrace the opportunities Hilton Head presents.

His love for teaching visiting and local children to throw a cast net, collect shark teeth, surf and respect the local environment comes naturally. Sewell’s parents, Hamp and Sis, helped shaped the community in Hilton Head’s early days. Sis founded the Kindred Spirits Enrichment Program for children at St. Luke’s Church, and Hamp is a former champion surfer who taught many local children to surf on North Forest Beach. Two years ago, Bryon Sewell created the famous plywood “Welcome home” sign that greeted Hilton Head residents as they returned to the island after Hurricane Matthews. Now, this native son welcomes others to enjoy the Lowcountry every day. 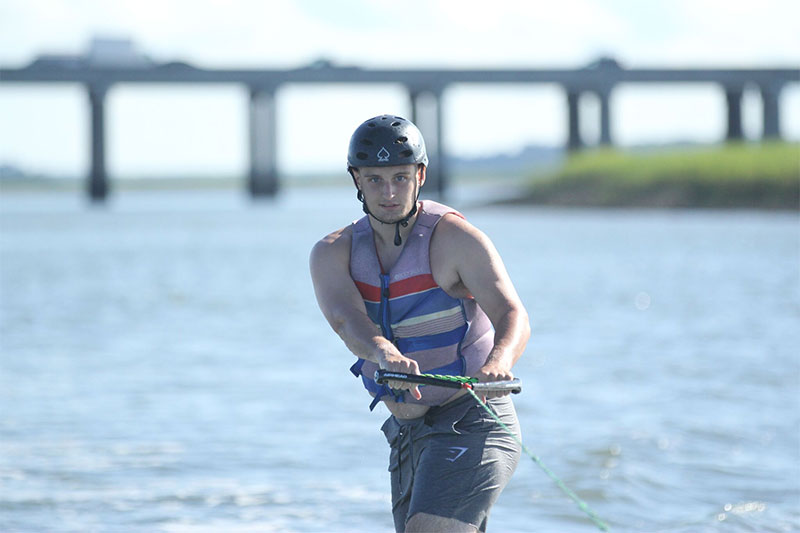