If you frequent the Hilton Head Island music scene, chances are good you’ve seen Jos Vicars on stage. And if you spend much time on the island’s less-populated beaches, you’ve probably seen Vicars pursuing his other passion.

In addition to being one of the island’s favorite musicians, Vicars is one of the area’s most accomplished kitesurfers — a hobby that he says changed his life when he took it up nearly two decades ago. 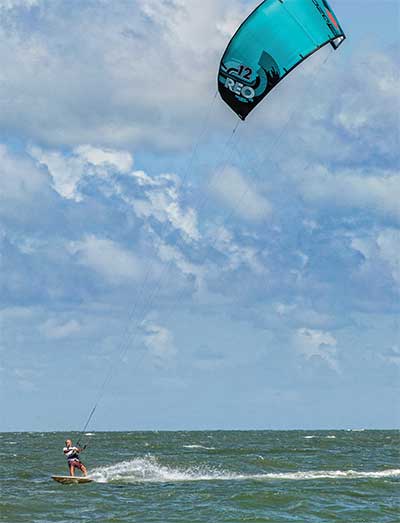 “I love it so much,” Vicars said. “I kind of classify my life into two categories — before kiting and after.”

Vicars was introduced to kitesurfing by a group of friends who split their time between Hilton Head and Maui and returned from Hawaii one year raving about the sport. They brought with them a couple of kites — which at that time were relatively rudimentary and quite dangerous, Vicars said — and began learning by trial and error.

“Back then they were crazy, only two lines and real dangerous, no safety systems or anything,” Vicars said. “Just these stunt kites that were big enough to drag you down the beach. You would pump up your kite and launch with your buddy and get dragged down the beach and scuffed up pretty good sometimes.

“It was really scary. There wasn’t really any kind of learning curve. You just had to go for it.”

And go for it, they did.

Vicars quickly became devoted to the sport and began to hone his skills, even taking part in a few competitions while living in the Dominican Republic a little over a decade ago. He has kitesurfed all over the world, from Norway and Holland to Costa Rica and the Virgin Islands, and has faced his share of close calls.

He’s had all of his ribs broken and been slammed into reefs and held under water by waves. Once while kiting in the Dominican Republic, he was slammed by a huge wave that beat him against the ocean floor, tangling his legs in his kite lines and holding him under water for what he estimates to be 90 seconds. It’s one of several times he says he nearly died doing what he loves, but he keeps coming back. 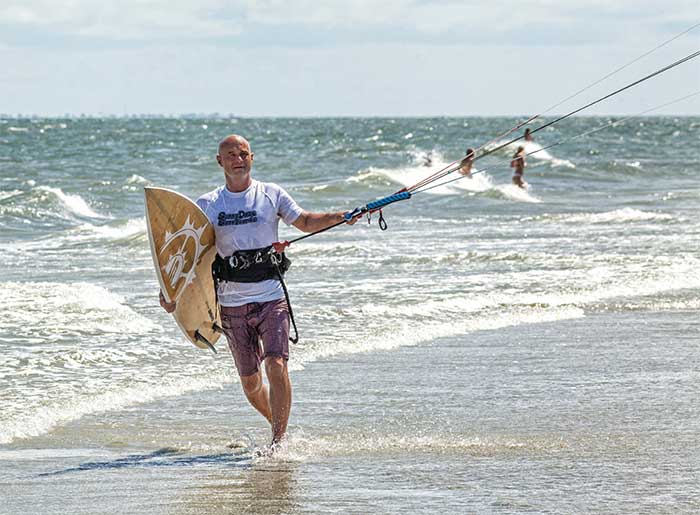 “There’s nothing like it, man,” he said. “To be able to hop around on the ocean and hang out with dolphins and sea turtles. You’re the fulcrum point between two major forces of nature — wind and water — and you’re bringing them together.”

And despite his injuries and close calls, Vicars said the sport isn’t inherently dangerous unless you push the limits. He likens it to the difference between riding a motorcycle at a safe and reasonable speed and jumping it off a cliff.

In fact, Hilton Head is one of the safest spots to learn the sport due to its relatively uncongested waters and wide beaches at low tide, which provide plenty of margin for error. Nonetheless, while Charleston has become something of a mecca for the sport in recent years, the number of dedicated kitesurfers on Hilton Head is fewer than 20, Vicars said.

Although it takes a fairly substantial investment to get started — upwards of $700 for a suitable used rig and at least six hours of lessons — Vicars says kitesurfing is a sport anyone can learn if they’re committed to it.

Beware, though, because you won’t want to stop.