Only a handful of the 22 boats entered in this year’s Hilton Head Harbor Wahoo Shootout were able to endure the choppy seas April 21 to get far enough offshore to troll for wahoo, and only two stuck it out long enough to dig one out, making for a lot of discouraged anglers confined to the shore.

“This is our 14th year, and this is the only year that we’ve had difficulty getting the guys out,” said tournament director Marc Pincus. “It’s unprecedented. But I give a lot of credit to the guys who actually did go and actually pulled one. They earned every bit of it.” 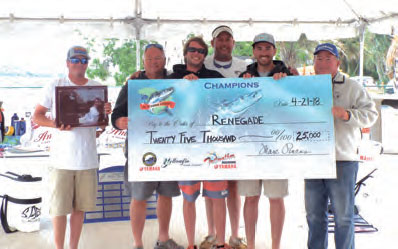 The uncooperative weather is one of the main reasons the three-month-long S.C. Wahoo Series has grown into the largest saltwater tournament in the state. A record 128 boats entered this year’s series, in which anglers pick just two fishing days from early February to mid-April and then fish one more day during the week-long shootout, which serves as the series finale and a last chance to move up the leaderboard.

The idea is to take bad weather out of the equation — for the most part — and level the playing field for smaller boats and recreational anglers who can’t get offshore as often as full-time charter captains.

It didn’t work out that way this year, as Capt. Stuart Lackey of Renegade Sportfishing out of Mount Pleasant swept the shootout and series titles, reeling in two fish totaling 154 pounds during the series — including an 88.3-pound monster — and braving the choppy seas on the final day of the shootout to pull in a 64.2-pounder.

“We were in first place and we knew we need to try to stay there,” Lackey said. “Plus, we’ve all been fishing a long time, so we’re kind of used to it.” 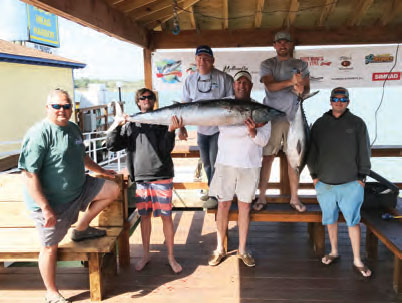 The double dip earned Team Renegade paychecks totaling more than $32,000. But it was a disappointing week for last year’s shootout champs, Team Gross Tonnage out of McClellanville, who often fished alongside the Renegade team and saw them pull in the fish that won this year’s series title and its $25,000 payday. Team Gross Tonnage only made it 10 miles offshore on the final day of fishing before being forced to turn back after waves started crashing over the bow of their smaller boat.

“I fished beside him both days, so not only did he beat us, but I was right there,” Capt. Gardner McClellan said. “I saw him win this tournament. I watched both of them come over the rail. That’s pouring salt in the wound right there.”

Capt. Trae Everett and Team Reelist out of St. Helena Island landed a tournament-record 105.5-pound lunker on his first fishing day but could only manage a 36.5-pounder on day two, finishing fourth overall.

“South Carolina showed it’s got some world-class wahoo fishing here,” Pincus said. “Right now, we’re the only tournament in the world that I know of that weighed one over 100 pounds this year, and you’re talking about Jacksonville and the Bahamas, and some pretty fishy places. South Carolina, man. I’m real proud of that.”