Teamwork is key in the sport of crew, because cooperation is the only way to move forward — or, in this case, backward. On Hilton Head Island in the spring, teenagers turn up for crew practice at the Rowing and Sailing Center knowing that if anybody on their squad is missing, they’ll be stuck on land. To practice on the water, every member of their team must be in the boat.

The rowers benefit from a gorgeous Lowcountry setting. The Sailing and Rowing Center is on Skull Creek, a stone’s throw from shrimp boats docked at Hudson’s Seafood House On the Docks. The kids stroke past shores where Native Americans once lived and British soldiers burned homes during the war of 1812.

Rose’s son William, 15, and daughter Emma, 16, are both coxswains, which means they’re responsible for steering the boat and coordinating the power and rhythm of the rowers. 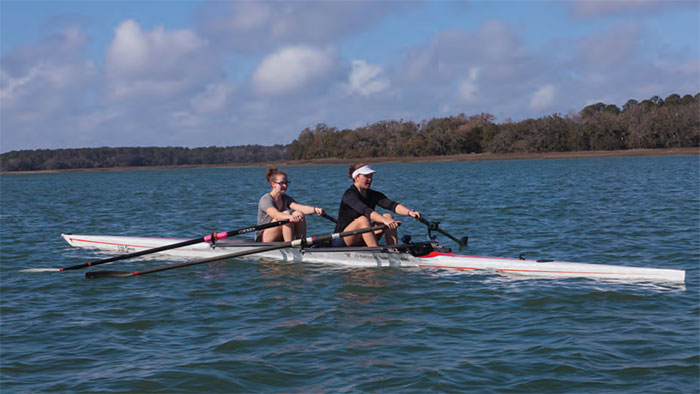 “This is a sport you can progress in very fast,” Rose said. “You don’t have to already know how to do it. The coaches put them in a boat and teach them how to row.”

The crew team is especially proud of member Kaitlin Porter, who after just one season was invited to row for the University of Texas Longhorns when she starts college there in the fall.

Head coach Scott Adcock started rowing when he was in high school in northern Virginia. A former Marine and high school crew coach, he was surprised to find that the sport wasn’t that big in the Lowcountry.

“We have one program that covers Hilton Head, Bluffton, Beaufort and Ridgeland for seventh- through 12th-graders from private schools, public schools and home schoolers,” he said. “And these kids come out here and bust their butts every day.” 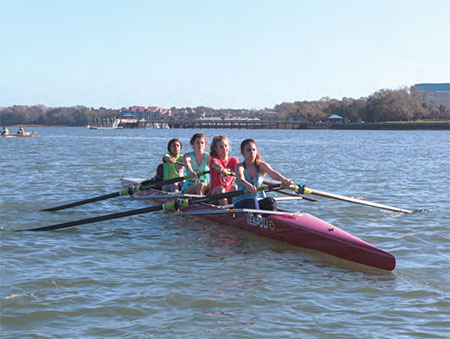 Adcock lives on Lady’s Island. In addition to making the drive to Sailing and Rowing Center on Squire Pope Road, he takes the rowers to compete in regattas all over the Southeast.

The team’s other coaches include Lu Strayer, a former team doctor with the U.S. Rowing Association, and Mike List of Toronto, who has helped with the team for three years. A small army of parents also pitches in, and the Palmetto Rowing Club provides scholarships for children who want to row but can’t afford the $450 fee.

The Town of Hilton Head built the Rowing and Sailing Center at Squire Pope Community Park in 2014 to help residents and visitors enjoy water sports around the island. Hilton Head Island Crew raised money for and built a shed where the boats are stored. The kids carry their boats down to the water for every practice and carry them back to the boathouse when they’re done.

It’s a good lesson in responsibility for the young rowers — even if they have it easier than previous generations of coxswains.

“Technology has changed, so a boat that 10 years ago weighed 350 pounds now weighs 200,” said coach David Erdman. “Instead of being wooden and fiberglass, it's carbon fiber.”