USCB TRACK STAR HOPES TO SLED HIS WAY TO THE GAMES

It took some time for Darryl Dunham to warm up to the idea of skeleton racing because, well, sliding down a frozen track head first on a tiny sled sounded awfully cold to someone who has lived his entire life on the coast.

How cold? Try 20 degrees below zero.

But a funny thing happened sliding down the frozen mountain. It turns out adrenaline has a way of warming you up.

“It was single digits for a whole day that we were sliding. I didn’t know if I was gonna make it,” Dunham said. “I’m over it now. Sliding down the ice, you don’t even feel cold.”

DUNHAM RECEIVED AN EXPENSE-PAID TRIP TO COLORODO TO TRAIN AT THE OLYMPIC TRAINING CENTER. 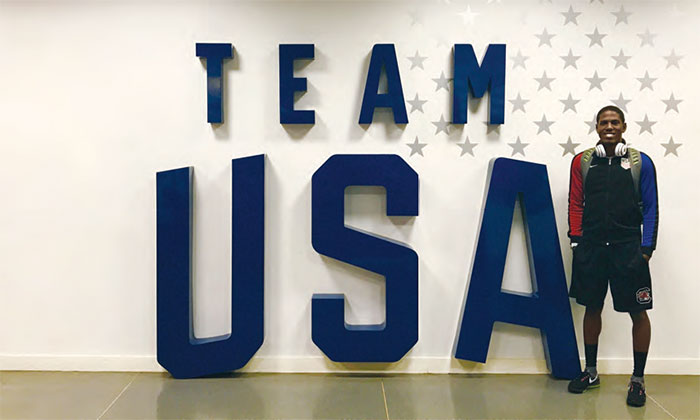 Dunham is in the midst of his final semester at the University of South Carolina Beaufort, where he is a star sprinter on the track and field team, and while he hasn’t given up on his dream of competing in the summer Olympics, he’s got his sights on the winter Olympic team.

The prospect first appeared on Dunham’s radar in the summer of 2016. The Richmond Hill, Georgia, native was living in Columbia for the summer after his first year at the University of South Carolina — he spent two years at USCB, transferred to USC for two years, and returned to USCB last fall. He was working out with Keith Scruggs, his strength and conditioning coach at USC. It turns out Scruggs had previously worked with USA Bobsled and Skeleton, the governing body for the U.S. Olympic team in those sliding sports.

Although he doesn’t formally work with the organization anymore, Scruggs organizes combines each summer to identify and recruit athletes who are suited for the sports. The region has a strong track record of producing athletes who fit the bill, Scruggs said, including former football players or track and field athletes who fall just below the elite level in their chosen sports. He encouraged Dunham to attend the combine in Columbia that summer — a 60-meter sprint, a weight throw and a broad jump.

“He was right on the cusp of what they were looking for,” Scruggs said. “He’s got the height where he could be bobsled or skeleton, but his body size is right in between. … They’re looking for athletes, but they’re also looking for people who are going to be dedicated and devoted to it.”

Dunham said the recruiter was impressed with his marks — particularly in the sprint test — and said that as a then-21-year-old with two years of college eligibility remaining, he still had time to develop. Still, Dunham wasn’t sure anything would come of it.

Nearly a year later, Dunham received an email notifying him of an opportunity for an expenses-paid trip to Colorado to train at the Olympic Training Center for “The Next Olympic Hopeful,” a reality show to air on NBC Sports Network. He applied, doubtful that he would be among the 25 athletes chosen for skeleton.

“Two or three weeks after sending my stuff in, I found out I was chosen,” Dunham said. “I had a week and a half to prepare and go to Colorado and go up against these big athletes.”

At least, that’s who Dunham thought he’d be facing. When he got to Colorado, Dunham found a bunch of people much like himself — talented athletes with no experience in the relatively obscure sport. The athletes were put through a combine similar to the one Scruggs conducted in Columbia and took part in other activities, including a mountain hike. They also were assigned mentors in their prospective sports — Dunham’s was Olympic skeleton athlete John Daly — and though it wasn’t cold enough to slide on the ice, Dunham and his peers got a taste of the sport on a sled that travels on a railroad-type track.

At the end of the five-day camp, Dunham learned he was not selected to be the “Next Olympic Hopeful,” but he was considered a prospect for further development and invited to future camps. The interest was mutual, and Dunham went to Lake Placid, New York, in December for a rookie camp, where he had his first encounter with sliding down the frozen track.

The rookies started out sliding from curve No. 9, about halfway down the 18-turn course. They moved up a turn on the second day of camp, and on the third day, Dunham got the vote of confidence from the training staff to give it a go from the top.

Despite the ice burns and sore neck from the gravitational force slamming his helmet into the frozen track, Dunham was hooked on the adrenaline rush of sliding down the hill at speeds of up to 60 mph.

“Some people think it’s a very scary thing, but once you do it, you realize you’re only going to be scared if you react. If you just let it be, it’s more enjoyable,” he said. “You’re on the sled steering it when it needs to be steered, otherwise you’re just trying to lay on the thing and see how fast you can get to the bottom.”

Dunham is still a long way from making the U.S. skeleton team for Beijing in 2022 — he isn’t even on the development team yet — but he’s a whole lot closer than any track star from the South ever could have expected. 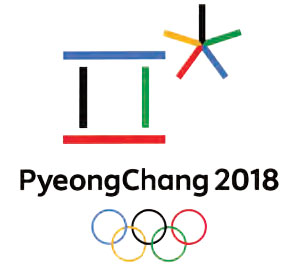 Opening Ceremony on Friday, Feb. 9 in primetime on NBC.

Coverage of hockey and curling

PyeongChang will be the first Winter Games to offer live streaming of the NBC broadcast network, including primetime and primetime-plus programming. 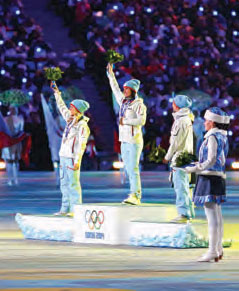 Live primetime coverage of a Winter Olympics for the first time, as well as 10 days of 24-hour programming.
Coverage of: bobsled, hockey, snowboarding, short track and luge.

If your cable system gets the "Olympic Channel: Home of Team USA," the channel will air 20 hours of news and highlights provided daily by Olympic Broadcasting Services, live Olympic medal ceremony coverage and a daily studio show featuring Jimmy Roberts.