When Hilton Head Island resident John Arlotta was named the National Lacrosse League’s General Manager of the Year in June, he was quick to share the credit: Organizations, he said – not individuals – win championships and awards.

But Arlotta has shown quite a knack for attracting the right kind of individuals to his organizations, whether Evicore Healthcare — the Bluffton company he heads — or his Georgia Swarm lacrosse franchise, which won last season’s NLL Champions Cup.

Arlotta believes in the power of character. From serving as a U.S. Army Reserve captain to his time as a student at the University of Notre Dame, honor was integrated into his future path. Becoming owner of the Swarm only reinforced that mission. 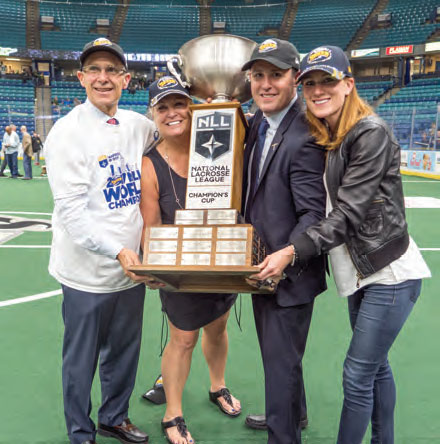 “Our logo at Evicore, the ‘I’ in the middle of the logo stands for integrity in the heart of everything that we do, and that’s the message that I give to employees and that’s the same message that I give to our players,” Arlotta said. “Great character starts with integrity and making the right decisions, doing the right thing. That’s very much a trademark of the Swarm and Evicore, and we are serious about that.”

Arlotta’s ability to identify the right personnel to fuel success was integral to the Swarm’s championship run. The team relied on 16 first-round draft picks and two key free-agent pickups as it set the NLL record for goals and swept through the playoffs. Arlotta also was able to swing a critical trade to land veteran attacker Jordan Hall to bolster the offense.

Arlotta was a late-comer to the lacrosse world. In a previous role in Baltimore, he met a former All-America Lacrosse player from Johns Hopkins who introduced him to the game. Arlotta’s wife, Bobbie, had played lacrosse in high school and loved the sport, but he had never been to a game. Over the next few years, he watched that team win two collegiate national championships and became excited over a sport that combines many skills. 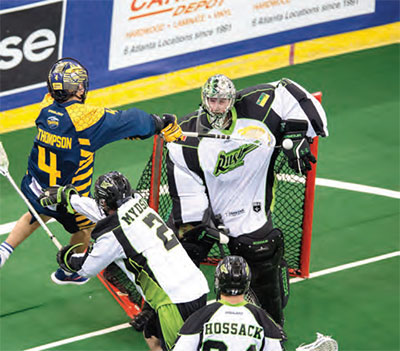 “It’s physical like football and hockey, but also requires a very high level of skill to be able to pass and throw,” Arlotta said.

After the Baltimore business sold, the couple wanted to use their good fortune to benefit Arlotta’s alma mater. Drawing on their love of the sport, they pledged the lead gift for a dedicated lacrosse stadium at Notre Dame, which allowed both the men’s and women’s programs to develop into perennial championship contenders.

While living in Denver, Arlotta received a phone call from close friend Craig Leipold, who headed a group looking to purchase the Minnesota Wild hockey franchise. The sale included the NLL’s Minnesota Swarm, and Arlotta bought the franchise as an opportunity to work with his son, Andy.

“My son and I started to build the team together,” Arlotta said. “We had always wanted to work together and never had the opportunity, so we did that in Minnesota.”

After Arlotta took over Evicore and he and Bobbie moved to the Lowcountry, the family decided to move the organization to Atlanta in 2015, capitalizing on the enormous growth of the area to expand the programs and access to the team. Arlotta also has used the move to help the growth of the sport in the Hilton Head and Savannah areas, and one notable Hilton Head athlete, Max Boyer, made the Swarm’s junior team. 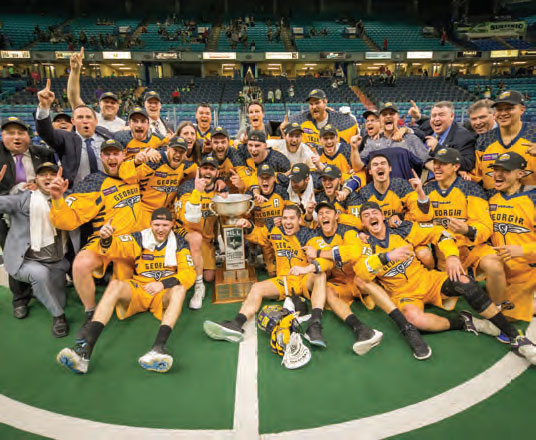 The Arlottas have made recruiting central to their strategy in building their franchise, focusing on players that show both character and talent. The theory proved solid as the Swarm defeated the Saskatchewan Rush in overtime for the 2017 NLL championship. The enduring image from that victory is one of Arlotta holding the Champions Cup above his head — at least until the team unveils the championship banner at its 2018 home opener Dec. 30 in Atlanta.

Organizations might win championships and awards, but they need the right individuals making the decisions, and Arlotta’s track record in impeccable.

“John had a vision, and he stuck with the vision,” Swarm coach Ed Comeau said. “That’s what a good general manager does. He helps the coaching staff and he helps the team by putting them in a position to be successful.”