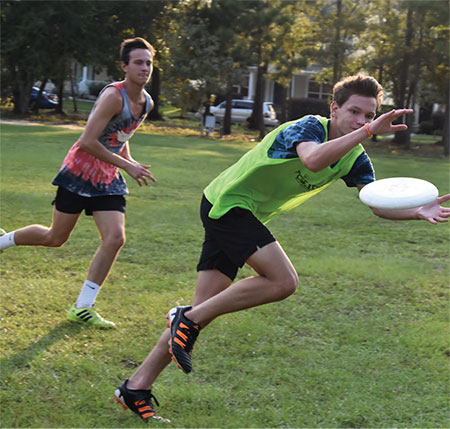 A layout in Ultimate Frisbee is exactly what it sounds like. The disc is coming in close to a sprinting player, but not quite close enough for him or her to catch.  Laying out — getting air like Superman — might prevent an interception or turn over. For a brief shining moment, the player launches into the air, stretches out horizontally, and grasps the Frisbee. Then gravity intervenes and the green field rises up with a bone-jarring smack to reclaim the athlete and disc. The layout is over, except for the applause and admiring whistles from teammates.

Luckily, injuries aren’t common in this non-contact team sport, which is played in Bluffton every Monday night, making it perfect for athletes of all ages.

“Anyone can play and get the hang of it,” said Nils Campbell, 14. “All you have to do is know how to throw a Frisbee a little bit, and be able to run.”

Nils learned to play from his dad, Eric Campbell, and older brother Huff, 16. All three were at Bluffton’s Oscar Frazier Community Park on a recent Monday night. Nils and his dad ended up on the same team when the group counted off, with Huff on the opposing side.

Nils and Eric’s team worked together to move the Frisbee down the football field with short passes, until Eric sailed the disc into the end zone and a teammate caught it to score.

The rules of Ultimate Frisbee are a combination of football and basketball (or netball) regulations. Players can’t run with the disc — when they catch it, they have to stop, pivot, and pass while avoiding defenders who are trying to slap the Frisbee to the ground or grab it out of the air. Like soccer, it’s a fast-paced game with nearly non-stop running.

During a water break, Lizardo “Speedy” Roblero, 37, said he likes the co-ed and non-contact aspects of the sport, as well as the spirit of the game. There are no referees, even at the highest levels of competition — Ultimate Frisbee has annual college, national and world championship tournaments. Instead, a tradition of sportsmanship and self-officiating puts responsibility for fair play on the players.

“If you say something was a foul, it’s a foul and the disc goes back to the thrower,” he said. “Nobody argues.”

Roblero, who is from Mexico, started playing Ultimate Frisbee in Bluffton several years ago and enjoys the interaction between athletes of different ages and nationalities.

Most of the players who join the open Monday night games live in Bluffton or on Hilton Head Island, but visiting Ultimate Frisbee players sometimes join in.

“They’re on vacation and they find us on Facebook because they’re looking for a pickup game,” Eric Campbell said. “We also have a group text.”

Ultimate Frisbee is played in more than 80 countries by an estimated 7 million men, women, boys and girls .The Sports & Fitness Industry Association reported in 2016 that Ultimate Frisbee is one of the fastest growing team sports in the U.S.  See you on the field.

IF YOU WANT TO PLAY: