No, not Frisbee or sand castle building, but bocce. The Old World game has gained popularity with a new generation. Bocce also is a good fit for Hilton Head because the equipment is easy to bring along and the game involves the perfect effortto- entertainment ratio for a day at the beach.

While bocce is a game of skill, it’s fun for everyone from young children to men and women of any age. Like pool, darts or horseshoes, the alternating play makes it an ideal game to enjoy while sipping a cold beverage and shooting the breeze.

Read on to learn more about the history and rules of the game.

Bocce’s roots go all the way back to 5000 B.C., when ancient Egyptians used polished rocks to play a form of the game, according to the U.S. Bocce Federation. The sport can be traced through the Greek and Roman empires, and under the Roman Emperor Augustus, it became the sport of statesmen and rulers.

Bocce gained and lost popularity throughout Europe over the years before a resurgence of popularity in Italy in 1896 brought the sport to its modern form. The first organized league formed in Italy in 1947, which also was the year of the first Bocce World Championships. The wave of Italian immigrants at the turn of the century brought bocce to the United States, and its popularity has continued to rise here.

Bocce has close similarities to horseshoes, in that competitors take turns tossing their balls underhanded at a fixed object and are rewarded for coming closer to the object than the opponent. The game is played with two teams consisting of one, two or four players, and each team has four large balls it attempts to toss as closely as possible to a smaller ball called the pallina, or jack.

A game begins with a coin toss, and the winning team can choose to have the first toss of the pallina or select the color of balls to use. A player then tosses the pallina — it must go past the center line of the court and stay within the boundaries of the court. 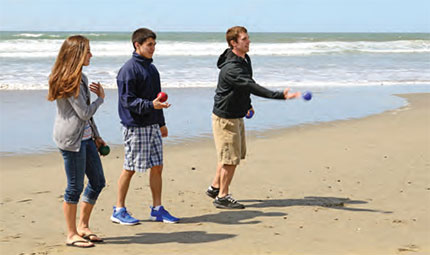 The player who tosses the pallina delivers the first ball; if it hits the backboard or goes out of bounds, it is a “dead” ball and must be removed from the court. The same team contines to roll until a valid point is established by keeping the ball within the court and close to the pallina. The opposing team then takes a turn until one of its balls is the closest to the pallina, or the “in” ball. The “out” team then takes a turn, continuing to deliver balls until it owns the “in” ball or runs out of balls, whichever comes first. When both teams have thrown all of their balls, the frame is over and points are awarded for each ball that is closer to the pallina than any of the opposition’s balls.

The team that was awarded points in the previous frame begins the next frame from the opposite end of the court.

The first team to reach 16 points is the winner.

Bocce traditionally is played on a closely cropped grass court or a soil or clay court similar to a tennis court, but the most popular place to play on Hilton Head is the beach.

Regulation courts are 13 feet wide and 91 feet long, but a makeshift court on the beach can be much shorter because the sand will keep the balls from rolling as far. A typical beach court might be closer to 30 feet long. Fishcamp on Broad Creek restaurant on Hilton Head has a court, and Palmetto Bluff is home to two courts that are open to the public.

Unless you plan to try your hand at a court that provides balls, you’ll need a kit that contains the pallina and eight large bocce balls. You can snag a recreational set for as little as $12 on Amazon or grab an affordable set at Walmart, Target or some area surf shops, while high-end sets can cost upwards of $200. Outside Hilton Head rents sets for $10 a day, and Hilton Head Bike Rental offers weekly rentals for $20.