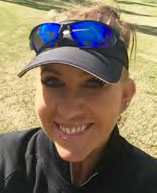 While playing in the Women’s Trans-National Amateur Championship last month in St. Louis, Kristyl Sunderman found herself discussing a playing partner’s collegiate experience in great detail. At some point in the discussion, the player’s mother noted that Sunderman would make a great college coach herself.

It was at that moment that a longtime dream was rekindled, and Sunderman — who was a standout player at UCLA and TCU and continues to compete in top amateur events around the country — began searching for coaching opportunities. That quest ended recently, when Sunderman was named the head coach of the University of South Carolina Beaufort’s women’s golf program.

“We are excited about the breadth of experience Kristyl brings to USCB and the incredible passion she has for the game of golf, as well as for developing and mentoring young women,” said Quin Monahan, USCB’s director of athletics. “I’m very excited about the future of our golf program and confident great things are in store for us.”

Although Sunderman’s resume does not include previous coaching experience, she is not short on experience on the course. As one of the top junior players in the nation, Sunderman earned a golf scholarship to UCLA, where she spent two years. She completed her collegiate career at TCU and continues to play at a high level, having qualified for nine USGA Championships — most recently the upcoming U.S. Women’s Mid-Amateur Championship scheduled for Sept. 10-15 in Erie, Pennsylvania.

Sunderman impressed Monahan and the hiring committee with her detailed plans not only for day-to-day management of the program, but also for individualized improvement plans that focus on the physical, mental, mechanical and emotional aspects of the game, as well as diet and nutrition. She displayed a strong vision for improving each individual player and helping each put forth their best effort during competitive rounds.

“I plan to implement a special program for each of my players based on their strengths and weaknesses so that they are developed to their fullest potential,” Sunderman said. “I want each day to be so positive that they can’t wait for the next. In that journey of hard work and toil, I want the team to believe in themselves and the possibilities.”

Sunderman has enjoyed a long and successful career in graphic design and marketing, and since 2004 has served as art director for Riverside Community Hospital in California. Her dream of coaching was on hold while pursuing her career and raising her daughter, who is now an art student in New York.

Now, the dream that was deferred for two decades has become reality, and Sunderman takes over a program that returns four of five starters from a team that finished eighth at last year’s NAIA National Championship and has not been ranked outside the top 10 in the NAIA Women’s Golf Coaches’ Top 25 Poll for more than two years.

“I’m really excited to get started,” Sunderman said. “I can’t wait to meet the team and start the grind to be No. 1.”