Becoming an Olympic athlete doesn’t happen overnight. Most often, the dream begins innocently in childhood and strengthens in passion and dedication as the years go by.

Last month in Rio de Janeiro, that dream came true for 10 mostly 20-something men and women who represented the United States in two martial arts competitions at the Olympic Games: judo and taekwondo.

Sure, participating in the Olympics is the ultimate accomplishment after years of training, but what each of these martial artists began learning the first time they stepped into a training studio became an integral part of their life. Every martial artist, regardless of age, discovers dedication, respect for self and others, focus, discipline, self-confidence, concentration, perseverance, patience, friendship and physical and mental well-being. The more one endures, the more one appreciates the higher intangible qualities of being a martial artist.

Youngsters and adults can reap martial arts benefits in the Hilton Head Island/Bluffton greater area at a number of different academies teaching these disciplines:

Mike Novitski, a Hilton Head resident and merchant services professional, dabbled in washin-ryu (a style of karate) as a 12-year-old in New York and practiced it for six years. It was an early calling.

The early 1970s Asian culture around him influenced his decision to take up the martial art. He saw Bruce Lee movies on the big screen and David Carradine in “Kung Fu” on the small screen. It also helped that his father was a big martial arts fan, too.

Western commercial cultural waves began churning in the ’80s, thanks to Chuck Norris, “The Karate Kid” franchise, and other pop culture icons. A new generation grew up with “Teenage Mutant Ninja Turtles,” “Kung Fu Panda” and now, the Octagon and wildly popular mixed martial arts. These days, about 18 million men, women and children in America practice some form of martial art.

“I’ve always had a passion for jiujitsu,” the 55-year-old student said. ”When I met Ben, he’s the real deal. It was too good an opportunity to pass up.” When he’s not teaching locally, Rhodes travels globally training military units and law enforcement forces in jiujitsu and krav maga, he said.

“People think (jiujitsu) is easy,” said Novitski, a white belt with a blue stripe around his waist.  “No, it’s not. … I believe jiujitsu is a lifetime thing for me.” 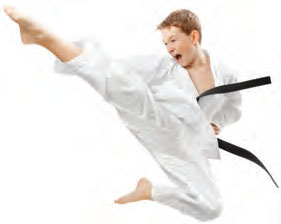 “I took class this morning; for example,” he said. “I was stressed out when I got up this morning for whatever reason. Training just washes it away … it’s almost spiritual. Mind, body, spirit.”

“In all the martial arts, you have a physical component, a mental component, and a spiritual component,” said Jackson, a West Point graduate and airborne ranger infantry combatant in the Gulf War and other military conflicts around the world. “People get weirded out when you say spiritual, but to me it means balance with the world around you,” he said.

“The ultimate of tai chi is to move your body without stress,” says Jackson, a corporate executive, motivational speaker and author. He also is the senior tai chi instructor at his school and studies the art with a grand master in Philadelphia.

Jackson said he had two near-fatal experiences that compelled him to focus on the martial arts.

“Martial arts has saved my life,” said the affable 5’10” 240-pounder. “The first time, I got into martial arts was because of fear. I got into a major fight in high school with a bigger guy, and I was so afraid that I nearly killed him because I had no control. And I said, ‘Maybe if I knew how to defend myself, I wouldn’t be afraid and therefore I would have more control.’ That’s what got me into the martial arts (taekwondo).”

Eighteen years later, health issues and stress forced him to face real-life facts. “That’s why I embraced tai chi to such a point it became a way of life for me, and again saved my life,” said Jackson, 49.

“When you live without stress, it’s amazing what you can see,” he said. “So many people are stuck in the here and now, this problem and the future problem, that they never live life. They just go from one problem to the next, versus, if you are able to live in the moment and enjoy the moment, because you may not have a tomorrow, that’s what tai chi has mainly taught me. You have to live life today.”

He voices a deep concern for today’s younger generation, especially those ages 7 to 18, who have an insatiable need for immediate gratification, spend hours indoors playing computer games, no longer have access to school-related opportunities (music programs, sports, clubs, etc.) because of budget cuts, and can’t play outside carefree like in the old days because of parents’ safety concerns. Stress has replaced goal-setting, in his opinion.

“I’m a life coach. When they look in the mirror, it’s someone they don’t like,” he said. “I’m looking at these kids, and I’m saying, ‘This is what this kid needs in order to evolve into this person.’ I use the principals of tai chi to help them.”

This month at his school, Jackson introduced Kung Fu Panda, a pre-martial arts program for kids ages 3 to 5.

“We have to start reaching kids earlier,” he said. “It’s all about teaching and developing kids to become leaders, to become confident. I want them to be prepared for life as they get older.”