DISC GOLF POPULARITY CONTINUES TO GROW ACROSS THE LOWCOUNTRY

If you’re looking for a new hobby that involves the outdoors, some friendly competition and a little exercise, disc golf might be right for you. It might not be as popular or as well-known as traditional golf, but there are opportunities to play disc golf in the Lowcountry.

Disc golf is played just like traditional golf, but instead of balls, players use discs. There is no need for clubs, and there are metal baskets instead of holes. The discs look like Frisbees but have a little more weight to them. 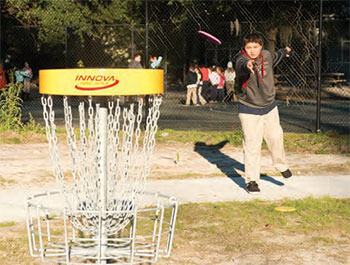 There is even a Professional Disc Golf Association — the PDGA.

People come from all over to play the game at the Sarge Disc Golf Course at Sergeant Jasper Park in Hardeeville, park administrative assistant Wendy Beard said.

Reservations are not needed. Discs are available for sale or rent in the park office. Hours are 8 a.m. to 6 p.m. seven days a week. Make sure to sign in at the activities center before playing.

About a dozen members of the Savannah Disc Golf Club gather at 10 a.m. Sundays to play at the park. 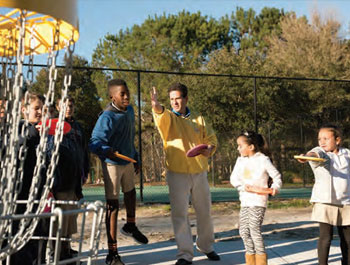 “There are three different tee pads,” Horey said. “There’s one for novice, there’s one for advanced and there’s a pro-level tee pad. So just like with traditional golf, there’s different sets of tee depending on your skill level.”

Horey said disc golf is much less expensive than traditional golf. You can buy a $10 disc and play as much as you want.

He said the people who play disc golf are usually more laid back than traditional golfers.

Horey also said a lot of former traditional golfers end up playing disc golf because it’s cheaper and a little easier on the body. He said people between the ages of 6 and 80 have joined them for disc golf on a Sunday morning.

“In Hardeeville, it’s cut through the woods, as are most disc golf courses,” he said. “So instead of sand traps and those kind of obstacles in traditional golf, there are trees and fairways that are cut out of the woods.”

“I first got into it for nature, to get out in the woods,” Horey said. “It’s like taking a hike through the woods but with a competitive side, and you get to throw stuff.”

While there is another disc golf course at the First Presbyterian Church on Hilton Head Island, pros like Urell say it’s not a great place to play. Urell said the course is terrific for practicing but not for playing an actual round because there is a lot of cross-traffic.

But in the early spring, a new disc golf course will be open for play on Hilton Head.

First Tee of the Lowcountry executive director Mike Davis said Urell was instrumental in getting the course started and the baskets donated.

An organization that teaches golf and its inherent values to the youth of Hilton Head, Bluffton and surrounding areas, First Tee developed a junior golf course with a 300-plus-yard driving range, a six-hole short par-3 course, and a chipping and putting area adjacent to the Boys & Girls Club of Hilton Head Island. The group will add nine holes of disc golf there and about 2,700 feet, Davis said. The course will be open to the public but will be blocked off for youth at certain times of the day.

“When you’re done with the beach and done with tennis and golf, what else are you going to do besides eat and shop?” Urell said. “It’s a neat thing to do here, and I think it will be pretty popular.”