Nearly a decade has passed since Mia Hamm retired from competitive soccer, hanging up the cleats that carried arguably the most famous American soccer player of all time to a 17-year career with the U.S. Women's National Team that included two Women's World Cup titles and two Olympic gold medals.

But retirement for Hamm does not mean slowing down. Just last month, she made headlines around the world by announcing within a span of a few days her role in the ownership group for Los Angeles FC — the newest Major League Soccer franchise — and her appointment to the board of directors for iconic Italian club AS Roma. She also used the opportunity to advocate for the use of natural grass playing surfaces for the upcoming Women's World Cup in Canada, as she's always eager to fight for equal footing for women in sports.

Hamm still spends a fair amount of time on the pitch, too, using her iconic status and world-class knowledge to teach a new generation of American soccer hopefuls through Team First Soccer Academy, the brainchild of Hamm and fellow University of North Carolina and U.S. Women's National Team alumnae Kristine Lilly and Tisha Venturini Hoch. The trio will bring their Team First curriculum to the Lowcountry from Dec. 12-14, holding a camp for boys and girls ages 8 to 18 at the University of South Carolina Beaufort's Hilton Head Gateway Campus in Bluffton.

The genesis of Team First came after the three had retired and wanted to pass along the knowledge and experiences compiled throughout their careers to young players who had a desire to follow in their footsteps.

"The thing that kind of sets us apart — aside from the fact that you're getting three players who competed and won on every level — is that we don't just show up and sign autographs. We're on the field for pretty much every minute of every session. We're invested," Hamm said. "It's not just our names on the camp. We want to make sure that the curriculum and the voice sharing the knowledge and curriculum is ours."

Young players certainly would be hard-pressed to find a better group of teachers. Hamm, Lilly and Hoch have combined for five Women's World Cup titles, five Olympic gold medals and 12 NCAA titles. Hamm is widely considered the greatest women's soccer player in history, and Lilly is the mostcapped woman of all time, with 352 appearances for the national team.

Hamm is largely credited with sparking the growth of the women's game internationally, and certainly it has come a long way since she and her peers had to play on co-ed teams because of a lack of girls club teams when they were growing up.

Her appeal reaches far beyond her gender, though. She and her husband, former baseball star Nomar Garciaparra, are among a large and distinguished group of owners of LAFC, and she was tabbed for Roma's board because her name and image still carry considerable cachet with the American soccer aficionados the club covets.

Garciaparra actually took the lead with the LAFC affiliation, tying together his Los Angeles roots and his love of soccer as a child, and the couple viewed it as an opportunity to put down roots, so to speak, as they raise their three children.

The appointment to Roma's board, however, came as a surprise. When Hamm got the call, she thought it simply would be an invitation to attend a game. Instead, she became an ambassador for a club to which she holds a personal connection. Hamm's parents lived in Rome for a time while her Air Force father was stationed at the U.S. embassy there. She spent Christmas and summer vacations there while playing at UNC and developed an affinity for the club.

Hamm's goals with both of her latest ventures align with the reason she and her colleagues started Team First. They're repaying their debt to the game that made them famous.

"In the end, I love this game and it's given me so much," Hamm said. "Any opportunity to help it continue to grow in this country and use my insights and advantages that I have to help in any way possible is what I'm committed to doing." 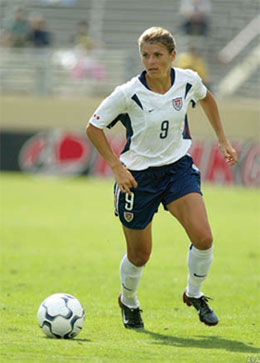