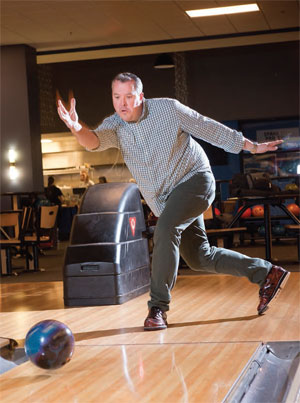 Jody Vermilyea remembers the last time bowling in the Lowcountry truly hit the big time. He was a 13-year-old in the crowd in 1988 when ESPN came to town to broadcast the Ladies Pro Bowlers Tour Carolina Classic live from Main Street Lanes on Hilton Head Island.

“It was so exciting to see a game I loved getting that kind of excitement in my own backyard,” Vermilyea said.

Now, for the first time in more than 25 years, the area will once again host a pro bowling event, thanks to the efforts of Vermilyea and others.

The Pro Bowlers Association’s Southern regional tour is coming to Bluffton on April 10-12 for the new Carolina Classic at Station 300. Vermilyea is hoping to draw some of the game’s best bowlers for the newest stop on the Southern region tour.

“We’re excited. It’s been something we’ve all wanted to make happen for a while, and now we have a chance to show off the region to the tour and truly build a signature event,” he said.

Vermilyea, an avid bowler and PBA tour cardholder who has taught a bowling class at the University of South Carolina Beaufort for the past three years, took over as manager of Station 300 in 2013. He said one of his first thoughts was to reach out to the PBA, and with the support of the center’s managing partners Gary and Linda Trimm, he put the plan in motion.

That idea became more of a reality once he began talking with Bluffton resident Bill Ursillo, a Station 300 league member and PBA Southern region bowler.

Ursillo connected him with Sam Zurich, the PBA’s Southern regional director. As it turns out, the tour was looking for new venues and early this year, Station 300 got the call.

“We’ve had a couple Southern region regulars come in who have given us high marks, and I hope that word spreads well,” Vermilyea said. “I can’t thank Bill enough. He got this moving in the right direction. Now we’re going to bring it home and put on a great show.”

Ursillo said Station 300’s lanes are beautifully maintained and that the center ranks near the top of the tour stops where he’s bowled.

“Up until now, I’ve had to drive four hours one way or the other to compete, so this is a beautiful thing,” Ursillo said. “The reality is, these lanes rank right up there in the top 1 percent of any I’ve bowled on. The restaurant is great, the facility is so clean. I can’t wait to show it off to the rest of the tour.”

It’s a shot in the arm for a sport that has fallen on hard times locally as of late. Four of the region’s lanes have closed within the past three years, as Victory Lanes in Savannah, Triangle Lanes in Charleston, Ribaut Lanes in Beaufort and even Main Street Lanes have shuttered. (Ribaut was re-opened in early 2014 by the Love House Ministries as the Community Bowling Center).

Station 300 has a thriving league base with more than 500 bowlers and a growing youth league, and Vermilyea sees the event as a means to further showcase bowling to the region.

“This is a great beginning, a way to get some folks in here who may have never witnessed the excitement of bowling,” he said. “We have a top-notch staff here, great food, a lot of fun for the entire family. This is a big-time event for Bluffton and we’re going to put on a big, loud show.”

PBA officials have been impressed with what they’ve seen. Even before hosting its first event, Station 300 was awarded with a second event, a PBA 50-and-older regional event to be held May 8-10.

“We’re thrilled. It’s a lot of work, but I think it’s a testament to how we’ve organized here and we can’t wait to pull off the events,” Vermilyea said.

The center’s 24 lanes will host up to 96 players. With no national PBA events scheduled for the weekend, Vermilyea is hoping to draw some of the national tour’s regulars to the event.

One of the sport’s legends is a possible entry. Florida resident Walter Ray Williams Jr., winner of more than 60 PBA titles and more than $5 million in career earnings, often plays the tour’s regional events, as do many of the Southern-based national tour players.

Players have until 10 days before the event to enter, so the exact lineup is still in flux.

“The beaches, the golf and the region is a huge draw for the bowlers, just as it has always been for pro golfers with The Heritage, so we’re hoping to draw some big names,” Vermilyea said.

Locals can buy tickets to the event at $10 per day and $25 for the three-day event. Fans also have the chance to bowl with the pros during the Pro-Am event on April 10. For $30 a person, bowlers will roll three games, rotating among pros for each game. There will be events at 6 and 8 p.m. The 6 p.m. event will feature a 3-6-9 format (bowlers get a free strike in the third, sixth and ninth frames) to help with scoring. The second event will feature a 9-10 no-tap format, in which knocking down nine pins on the first ball counts as a strike.

The Pro-Am is filling up quickly with just 60 amateur slots per event, according to Vermilyea. For tickets to the Carolina Classic or to participate in the Pro-Am, go to www.station300bluffton.com for more details.

“The support from the community has been outstanding so far,” Vermilyea said. “We really hope to build this into an annual event the region can be proud of.”