When I was asked to write about wahoo and the upcoming 11th annual Hilton Head Harbor Wahoo Shootout, my imagination went into overdrive. I do a lot of fishing for just about every species that swims, but if I had to choose one — and only one — fish to go after for the rest of my days, wahoo would be that fish.

Some people dream about the perfect putt, others about catching a redfish on the fly, but my recurring dream takes place on the vibrant blue waters offshore.

Trolling, I sit watching rigged baits skipping down the face of waves made by the boat’s wake when, out of the corner of my eye, I see this torpedo-like streak racing across the surface toward the baits. It covers 200 yards in the blink of an eye, and where a bait was skipping along, there is now nothing but a gigantic splash looking somewhat like something has punched a hole in the water. Instantly, the rod attached to that bait bends double and line screams off the reel so fast you panic, not sure you even want to touch the rod. It can only be one thing. A wahoo.

Back in the ’70s and ’80s, there were a lot of offshore tournaments on Hilton Head. Sea Pines, Shelter Cove and Skull Creek hosted offshore tournaments, but for whatever reason, those days are long gone. I guess people thought offshore fishing was a rich man’s game, but with today’s technology and fast center console boats from 25 feet to up to 36 feet, blue water fishing is affordable for almost anybody. With this in mind, in 2004 local captain Marc Pincus rounded up a handful of local boats and started the wahoo shootout, with Hilton Head Harbor sponsoring the event. 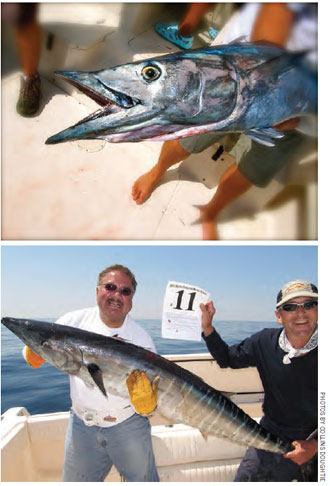 There were only five or six boats that first year. We all knew each other and it was more about winning “braggin’ rights” than anything else. The next year, the word got around and another half dozen boats joined in the fray. Ever since then, the tournament has grown to the point that it is now the tournament to be in. Sure, there were a couple of those big sport-fishing boats out there, but the majority of boats are the twin-engine, center console type. And because the tournament was set up so you had multiple days from which to pick your day to fish, it’s not unusual that all the boats end up out there on the same day when the sea is nice and calm. It’s competitive, but at the same time it’s a friendly type of competition in which Lady Luck often determines the winner. Bantering is always rampant on the VHF radio. “You catching anything Bo?” followed by lie after lie after lie. “Naw, I ain’t had a lick in the last two hours, but I heard Billy got two down by the ledge.” You see, that’s the way it works out there. Bo no doubt has a big wahoo on board and instead of telling the competition, he sends them on a wild goose chase far away from where he caught his fish. Wahoo are known to hang in packs and to illustrate this, two years ago in the wahoo shootout, we hooked five wahoo at once. It was sheer pandemonium. This rod over that rod, this line under that line, everybody yelling, do this, do that… it really is quite humorous in retrospect.

Catching wahoo isn’t rocket science. One lure catches more wahoo than any other: a blue-and-white Ilander with a ballyhoo. Wire leader is a must because wahoo have rows of razor-sharp teeth, and when they see something they want to eat, they can kick it up to 60 mph. And unlike other pelagic fish out there, these rocket ships have an inverted, hinged lower jaw that allows them to open their mouths impossibly wide. The strikes are sudden and furious, their first run is faster than a speeding locomotive and if there is any doubt what is on your line, you’ll know it’s a wahoo when your rod bucks and bounces as these fish shake their heads violently back and forth like a dog with a rag doll.

Besides being plan fun, the Hilton Head Harbor Wahoo Shootout pretty much guarantees you’ll come home with a full stomach at the weigh-in feed and a brain chock full of stories as anglers give play-by-play accounts of their days. The big enchilada goes to the largest wahoo, with other cash and merchandise prizes awarded for top youth angler, top female angler, largest dolphin, largest tuna and even the smallest wahoo, plus tons of raffle items. So get in on the most fun you’ll have all year by entering this year’s shootout. Wahoooo!