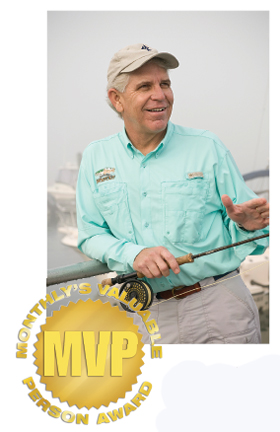 Another source of inspiration for Davis was a special needs client named George, who he took out on his boat every year. “He absolutely loved everything about it, and that was a pretty cool thing for me to experience,” said Davis. “And I thought that a lot of other kids on the island would benefit from an experience like that.” Now, Fishing With Friends is an annual event for special needs individuals held in the early fall. Davis said anywhere from 35 to 55 individuals participate, and ages range from five to 55.

The event is made possible through the support of the community and those involved. The Children’ Relief Fund, a local nonprofit for special needs children, is one of the biggest benefactors of the event. Donations also come from individuals in the community.

“It’s really a lot of fun,” said Davis, who noted that the weather has almost always cooperated. “It’s a rewarding experience, and we find ourselves saying that we can’t wait until the next year’s event when it comes to an end.”

This year, more fish than normal were caught, including catches of red fish weighing more than 30 pounds by four or five kids. The largest catch they’ve ever had came last year when a 13-year-old girl caught a 200-pound shark.

“The kids have a really great time,” said Davis. “And one of the best things for them is the camaraderie. Most of these kids know each other, and some have been fishing with us since the beginning 12 years ago.”

Davis enjoys watching the new five-year-olds who participate for the first time each year. “They just have a ball,” he said.

Davis grew up and went to high school in Nashville, Tenn., and then earned a degree in fisheries management from The Ohio State University. He began working full-time in the fishing business in 1977 and was a saltwater inshore fishing guide on the island for 22 years. He currently works as the Outdoor Pursuits Director for DPS Club Management, managing the naturalist and fishing programs.

Davis has truly taken his desire to give back to the community to heart. In addition to his work with Fishing With Friends, Davis is looking forward to working with Tripp Ritchie and his organization, the Lowcountry Autism Foundation. The foundation will have three major fundraisers: a fishing tournament, an auction/gala and the annual On the Half Shell Half Marathon.

“Captain Fuzzy Davis has the biggest, brightest smile and a heart to match,” said Carol Bartholomew, a parent and CRF board member. “He is a relentless giver with no other motivation than to help others. Fuzzy may be the ringleader, but his family is the force. His wife, Kim, and children, Drew and Kerri, enthusiastically volunteer by his side. The community is lucky to have the Davis family, and I can’t imagine where Children’s Relief Fund would be if we had more ‘Fuzzys.’