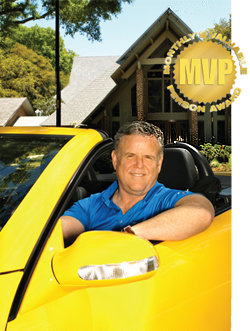 He and Marcia now live happily, but busily, retired in Hilton Head Plantation. Hilton Head Monthly: So, how does it feel to be Man of the Year?

HHM: Who are the Presbyterian Men of the Church?
JC: It’s a men’s group of the three Presbyterian churches in the area. They do two really big events. They do the Christian Heritage Breakfast (held during Heritage Week) and that always draws about 400 people. They always get some golfer who’s got a real commitment to the Church to speak. The other thing is an ethics symposium in November when we bring in about 100 kids from colleges all over the Southeast. It’s two or three days of case studies where we pose ethical situations and ask the students how they would react if they were in that person’s shoes. It’s really interesting. I’ve been a facilitator for the last five years and you get some really interesting answers.

HHM: You served in the Air Force, but are a member of the Navy League. What’s going on here?
JC: I grew up in a Navy family. My father and his brother both graduated from the Naval Academy. In fact, my uncle was a torpedo plane pilot who was killed early in World War II and they named a destroyer after him, the U.S.S. Collett. At the time, my dad was the captain of a destroyer in the Mediterranean and he asked the Navy if he could be the first captain of the new ship. They said OK. We think it’s the first time that has ever happened.

HHM: According to our information, you are in possession of an item given to a relative of yours by Thomas Jefferson. True?
JC: Yes, it’s a silver bowl. It turns out that I descend from a convergence of very old families dating back to the 1600’s, one from New England, one from Virginia and one from Maryland. The family tree has been diminishing over the years so it found its way to me.

HHM: Do you have any advice to leave with our readers?
JC: Do what you love to do and work for something that you believe in. There are all kinds of studies out there that say if you get involved and help out other people, you’re going to have a happy life.