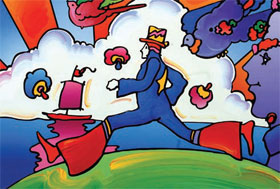 This month, we are proud to say his art is on the cover of our magazine.

Max’s team contacted us a few months ago, offering to paint covers for our Hilton Head Island and Bluffton magazines in exchange for promoting his upcoming exhibition at Karis Art Gallery. The exhibit previews Sept. 14-21. Max will make special appearances at the gallery from 6-9 p.m. on Sept. 20 and noon-2 p.m. on Sept. 21.

The 75-year-old living legend gave us a call from his New York studio recently to talk about the upcoming exhibit, the beauty of the human heart and the totality of existence.

Hilton Head Monthly: We’ll start off with an easy question that you probably don’t have an easy answer for. What is good art?

Peter Max: To me, good art just hits you a certain way. It’s like good music. If the composition is beautifully done, the colors are beautifully put together and the subject is interesting, it just gets you going. If you live with it, have it on your wall and love looking at it, that would be good art.

HHM: Many artists have risen and fallen since you came on the scene in the late ‘60s. In your opinion, how have you remained relevant?

PM: When I draw and paint, I do it for myself. It gives me pleasure — not so much doing it — but what’s coming out, what’s on the paper. I love doing it over and over again, in a 1,000 different ways. When it pleases me, I’ve found that it pleases other people. It guess that’s it.

HHM: If success had not found you, would you be a starving artist or would you have found another path in life?

HHM: How would you describe your rise?

PM: The fact that people love my work was satisfying to me when I was very young. Then suddenly, museums and curators liked it and it just went on from there. Eventually, I just accepted it. I was like, “Oh my God, this is fantastic!”

HHM: You are returning to Hilton Head this month for a major exhibition of your latest work. How would you describe the collection that will be on display?

PM: They are works I’ve done fairly recently in my private studio. I was surrounded by a person or two. There were assistants and I’ve got a full-time DJ that plays music for me. It was just a joy to create.

HHM: This will be your second trip to the island in as many years. During your last exhibit here, a cardiologist noted much of your work features hearts. What is the significance of that?

PM: You know how little girls like to draw hearts in school? I started drawing them sometimes and painting them. It’s how Peter Max would render a heart — with red paint, with brushstrokes and so forth. There are many items I do that are like this, but the heart sticks out because little girls drew hearts all of their lives. I also love the shape of a heart and its meaning.

HHM: What do you want people to take away from your work?

PM: You know, that’s so funny. I never think about that. I just love the doing of it, you know? I’ve talked about that with the guys from the Beatles and the Stones and they feel the same way. It’s the joy of making the music, not so much what people take away from it. That happens afterwards.

HHM: In the four decades you have been producing fine art, has technology had a positive or negative impact?

PM: Always a positive impact. In many cases, it’s a shortcut to something. For instance, when I started working at editing studios, I was able to do something that maybe 20 years ago somebody had to do with a razor blade. I feel the same way about art.

HHM: Do you think art as you produce it will someday go the way of the dinosaur?

PM: For other people to do it like that? It could happen. But certainly it’s going to hang in the biggest museums.

HHM: You are known for using psychedelic shapes and color palettes. In an interview we saw with Larry King, you said color and creativity just come to you. Can you elaborate on that?

PM: When you ask your favorite singer how they got to be so good, they say, “I don’t know. I’ve always had that voice, I guess.” It’s the same. I’ve always had that thing. I was a young boy living in Shanghai, my mother gave me crayons and paper and I did stuff that she hung all over the walls. Other people would come over and didn’t believe I did it because I was just a kid. There was something about how my lines were and how I used the crayons.

HHM: So you knew at an early age you would be an artist?

PM: I never thought in my life I would become an artist. I always thought I would have to become a scientist or an engineer. I always wanted to become an astronomer. I was so interested, and still am today, in how big and how fantastic the universe is. Every year that I’ve lived, the universe has doubled in size. I just can’t believe it. I’m in awe of it. I don’t understand it, but I love the fact that it is what it is. It’s just amazing.